I going to build a 12s8p battery pack with samsung 40T. And i have seen many using nikkel plates not strips. Can someone help with nikkel plates and other inporten sruff doe the buils.Thanks from Singh From Norway

Hey man! Nkon.nl its pretty nice for getting battery making supplies and cells. Ive never have a problem with tem.

And i have seen many using nikkel plates not strips

There are not actuelly nickel plates, rather very wide nickel strips. You should be fine with 30mm wide, but if you want more coverage go for 50mm.

I also advice you to go with 0.2mm thickness so you can get high amps before getting the nickel hot, although that has to do also with the ammount of series connections.

Anyways, building a battery, specially for Esk8 its no joke, its drangerous, can have very serious consecuences (like burning your house) and you have to be very certain of what you`re doing. Take in account that the battery will take a lot of abuse from vibrations, so it has to be specially well built.

You should find all the information you need in this thread:

I know this is long but it is filled with fails and important information you need to succeed!

I did this small condensed safety points that sumes up some of the things you should take in account when building your battery:

MAN THIS THREAD IS LONG… Im going to build my second esk8 battery and read pretty much the whole thing… pretty insteresting how the stardart has gotten better through the years!! . . . . I have a few questions that i might have missed the answer for: How much amps per spotweld? (ill be using 0.2mm nickel) Recommended Jules for stacking 0.2mm Nickel?(only 2 layers) (ive read somewhere that between 90j and 100j) I´ve not seen how you guys solder the “S” cables on the nickel flaps without …

Have a look at some posts after that add some information i missed!

BTW, im visiting norway from the 24-28, and ill be going to Oslo and Bergen. I will move a little bit north and south from there. If you cant find a source for nickel, i might be able to bring some to you as i have some leftovers at home.

Yes that would be nice, if you can catch up in Oslo. Need som edvise to, just let me know when you have some time when you are in Oslo. beers on me.

Need som edvise to, just let me know when you have some time when you are in Oslo

It´s actually a short trip, my fligth its going back to spain on the 28th. Ill dm you some details later. What nickel and what quantity do you need?

If you’re doing 8P you’ll likely want two rows of 4 in each group right? In that case as far as I know it’s better to use one wide strip that covers all 8 terminals at once instead of two separate rows and then welding more strips to connect them. So 7mm will likely not be enough. Ideally 25-30mm to cover all, or at least 10-12 if you’re doing the split rows

It would look like this in green, instead of the red. Red has less nickel and more joints, plus the green is also easier to construct 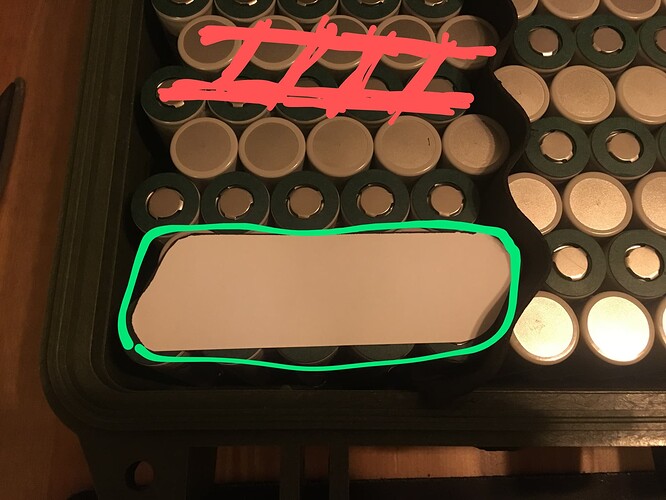 I would like to do as the green one, have been doing the red ones before, its mor job and more joints as you say. But i dont now where to get 25-30mm wide pure nikkel strips…?

I think I got some of mine from 18650.club, that’s run by Anubis on this forum, it’s shipped from the UK so was a reasonable choice for me in Ireland but it might get nabbed for import tax. I put 25mm nickel into AliExpress and it showed some useful results, but do some homework on the vendor first and test the strip with a spark test and a salt water soak when you get it. There’s a thread here on trusted AliExpress vendors, if you can find a vendor there that’s also a good idea. From memory I think I also got some from a German supplier on eBay with a high rating on a bunch of industrial stuff, naturally it was a bit more expensive but it seemed to work for me