I cant say how long ive been riding.like.this but probably close to a year now… But got a set of 6374 maytechs a while back and at some point during normal riding and swapping this and that I started getting weird results from the unity during detection. So for a while now ive been running 1 sensored and 1 non but its still not as smooth as when u have 2 working in foc.

Any thoughts, insights and/or link to making my 1 motor while again…is it even worth the time? 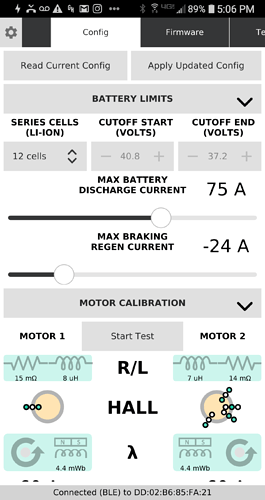 Gave up on sensors, hfi is just as good

What’s the highest motor current you’ve hit running it and what motor u use? I heard it disconnects with high enough current.

I see u hitting way higher. I see 83 at least. U don’t lose positioning anyway I guess. Is that data two motors or one? Im guessing two from what u say.

I have two 6378(of I remember correctly). Sensors is only for low speed anyways, it’s configurable and default is 3000rpm

Thanks. Is the data from two or one motors? And ur using the vedder positioning thing not sensors right?

I would go through and open up the motor to check the connections from the jst plug till the hall sensors. Maybe just one wire broke or doesn’t seat right in the jst plug.
Don’t think it’s the case of the unity Interface, but to be sure I would swap the working motor to the other side and see if the motor detection run through without faults.

So if i go back to an older thread of mine where the actual issue I had ended up being a phase wire connector came loose on the unity side. Its been from this time where the issue presented itself.

Across 2 unities the problem persists and def follows 1 particular motor.

Well almost… Those are the results on problem unity but my street carver set up… New unity but original board still yield questionable sensor results…but a a single aggresive spin of the wheels made flux work… So first detection had good sensors on motor 1 and motor which has been in question stays in.question… Its the motor not the unity port… A second Detection gave weird results for both… I was able to attempt with a diff sensor cable on motor 2 with no changes… Attempt 1 [Capture%20_201…