Wanted to start a discussion on these.
The Idea I have is simple, though I am worried about manufacturing.
something like this, but a full 360 sleeve and the fins going around (90 degrees from this picture).

@surfnacho @Battery_Mooch , what do you think?
I have a midterm in 3 minutes so Ill respond then. 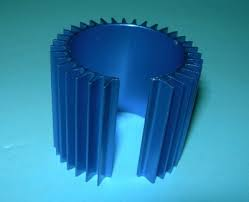 Do you think making the fins radial with the cans rotation would allow more airflow between grooves?

General question directed at the more technically experienced, not anyone specific.

Imagine the sound this would produce at 10k rpm

Also doesn’t the stator get hotter than than the rotor?

Actually the more drag the more heat dissipation you’re gonna get, I think having a bunch of helical fins is the most effective but you need a 4 axis cnc

You could make it with two halves, like hubsinks for ebikes

Makes more sense on outrunners where the stator is on the can. An outrunner w/ a cool can/rotor is still going to suffer losses from the core heat.

You should still make them though, I think ppl would buy 'em up.

@ZachTetra you’re right that it would have more drag force but as it’s convective cooling you’re after, you want it removing the heat from the surface as fast as possible.

Imagine having an esc heat sink plate up like a sail in the wind vs parallel to the deck.

Helical is interesting though, that would force air flow while still moving it. Like having an esc heat sink plate diagonal to the wind.

Is there any way we can create a seal on our motors to submerge it in a mineral oil tank and have the heatsink for the tank?

Actually the more drag the more heat dissipation you’re gonna get, I think having a bunch of helical fins is the most effective but you need a 4 axis cnc

Turbulence can be good to “scrub” into the slots but we need to avoid creating pockets of still air as the cool air rushes overhead. Going helical I think means a longer path for the air through the slots versus rushing over the slots and that might choke off flow through the slots?

IMO having the slots rotated 90° from the image above, simplifying the flow path, would be the most efficient. It would allow easy access to the bottom of the slots and the turbulence behind a board is probably massive anyway.

Hmmm…how much cooling is done by spinning in its own air versus moving forward through “new” air?

I’m only guessing here though based on power electronics cooling and the air flow paths that are used there. Some testing would be easy to do though, either with power resistors epoxied to the sink (and fans to cool) or putting different versions on a motor. Even just using wire ties and thermal paste to hold them on for a quick test could work on a board.

If two halves are used and the sink is spinning the halves should meet up perfectly aligned to prevent creating a set of corners that could accidentally shred things if touched.

Do we have data on how effective this could be, versus cooling by the mounts, etc.? It certainly would;it hurt though and could look incredible.

Safety issues? The sink fins would have to be wide enough to not cut if touched while spinning.

You could make it with two halves, like hubsinks for ebikes

Brilliant. Need to secure the halves…just in case they let go.

If they are gonna be extruded, they could be turned for somewhat cheap. I’d make the fins like a screw thread.

I love the idea and think it’s worth testing. It might only have a small effect on the motors internal temp but the opportunities to make it cool looking are endless.

I love the idea of splitting it into halves to simplify mounting and to allow for different profile front and rear pieces, but a full ring would be more secure.

A lot of epoxies are quite brittle and I think could eventually let go due to vibration. Some way to clamp on the sink(s) would be good. If the sinks are a good fit to the motor can then thermal epoxy isn’t really needed since the layer would be so thin. This would allow the use of “toughened” adhesives, even high temp RTV’s (which can be bought as thermal versions too).

Ouch…never occurred to me! Yea, this could be an issue.

how much it cools the motor

this. @Arzamenable, do you run into thermal throttling issues on your more “spirited” rides? seems like this would be most problematic when running the motors below their optimal speed and above their intended load

why not just size the motors appropriately for the load? Or simply add more motors?

I love “science” too but I think were after the flyshit in the pepper here.

I actually made a hole in some hiking boots by accidentally just touching my hobbyking esk8 can, and they are pretty round

I’m with you buddy

The fans that pull air through the motor are one of the best solutions I’ve seen. At least the closest an add-on has come to removing heat directly from the stator.

For cooling outrunners, it makes more sense to use the motor mount for heat dissipation. can-end fans also have been shown to have a pretty significant effect.