But then while I was separately looking up motor can materials earlier I read this:

Although efficiency is greatly affected by the motor’s construction, the Wye winding is normally more efficient. In delta-connected windings, half voltage is applied across the windings adjacent to the driven lead (compared to the winding directly between the driven leads), increasing resistive losses. In addition, windings can allow high-frequency parasitic electrical currents to circulate entirely within the motor. A Wye-connected winding does not contain a closed loop in which parasitic currents can flow, preventing such losses.

From a controller standpoint, the two styles of windings are treated exactly the same."

And it seemed counter intuitive.

Diving even deeper, it comes down to the overall copper used in a motor. High kv motors have less windings but thicker windings. Low kv has more windings of thinner copper (thanks for the correction @ducktaperules)

Interesting enough, they come out almost identically in terms of copper weight and Kv has nothing to do with efficiency in reality.

This doesn’t account for heat saturation and other real world factors I can’t calculate but was very interesting to watch.

Nice vids. Thanks for sharing. So are we basically saying that all that time we’ve been wrong thinking that gearing down is more efficient?

This was mentioned in the video I linked and dismissed as overall copper weight being more or less equal between different kvs of motor. They were claiming more windings of thin wire was equal to less windings of thick in terms of copper loss.

No idea if it’s true, just what was told.

However I don’t think adding another belt and pulley is worth it just to use a higher kv motor. (Extra inefficiencies from more moving parts) Would love to be proved wrong though.

Yeah, good point. The more so if we’re discovering that “higher kv => more efficiency” may actually be a myth. From what I gathered so far, it’s the overall motor construction that makes the difference in efficiency, not the kv.

Highly agree! Neo about to turn our world upside down with curved magnets and 6 phases

That’s what I’m getting from my reading today.

that just seems counterintuitive to me. a longer run of thinner wire would have a higher resistance than a shorter run of thicker wire. and that intuition bears out when measuring the resistance between phases.

the fact that it’s equal volume of copper doesn’t seem relevant to this comparison.

maybe it would be relevant if I had asked “6s 200kv vs 12s 100kv with the same gearbox and wheel”, but that’s a different issue

Do Teslas run with mechanical reduction? I’m sure whatever they use is better

The same volume of copper would experience the same loss in energy. It’s a constant. 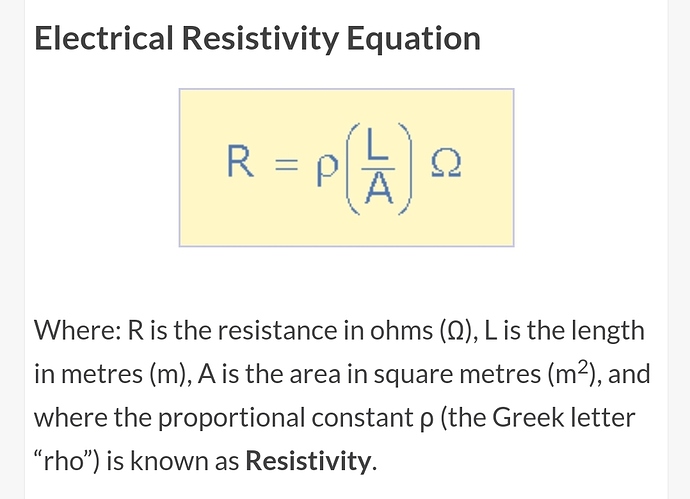 i agree that copper mass effect should be similar but as current in the motor is AC so the difference may be caused by the copper “skin effect”.

I would guess that many thinner wires means larger surface area and so skin effect becomes more significant, increasing resistance and causing more energy to get lost as heat.

Do Teslas run with mechanical reduction?

Shall we email Elon and ask him why they haven’t simply used a lower kv motor instead?

if you have 1 wire vs 2 thin wires then they have the same mass and same resistance . . . if the 2 small wires are in parallel. this is not true if the thin wires are in series.

with the formula in your picture, 2 thin wires in series means “L” doubled and “A” is half so R is four times higher.

Is this just accounted for in the winding configuration and that is what is being referenced when the parallel wye winding is used “more efficiently”?

So theoretically there must exist a power throughout equation that has the inverse relationship to account for series winding? Or why would we bother winding in that fashion at all?

@BillGordon at your leisure could you spin the motor efficiency related parts of this into a new topic? Really interested in figuring shit out in logical discussion for a change.

If you half your Kv, you double your Kt, but if you adjust your current, your losses on the windings per unit of torque stays constant

And regarding comparing a high Kv motor with a high gearing and a lower Kv with lower gearing, if the currents and gearing are adjusted so they have the same speed and same torque, they should perform the same apart from a bit higher core loses on the higher Kv one

Interesting information. I keep hearing more that kv doesn’t affect efficiency. The second video I linked above directly compares motor kv to efficiency and claims that they aren’t directly correlated at all.

He claims when you change kv, you have to maintain slot fill percentage and the differences in efficiency in varying motor kvs comes down to the diameter of wire used and the larger air gaps created by using thicker wires run side by side. He then mentions how you can run into the issue of using too thin wire as well.

I think I’m finally getting it. @Pedrodemio thank you for bringing up the torque constant (Kt), it connected a lot of dots I didn’t know existed.

Therefore, increasing or decreasing motor Kv wouldn’t have an affect on motor constant.

Yeah but only if you ignore all other loses

First ignoring them. If you run two at half the current, you have the same torque but the copper loses goes down by a factor of 4 due to the I^2 dependency

Now, if you take all other loses into account things get more complicated, bearings drag, belt/gear, friction from the can with the air and most important, core loses. This last one is roughly proportional to between rpm^2 and rpm^3 depending on a bunch of factors

The tricky part is weighing everything, if analyzing your riding style you can say that most of the time you have low currents going into the motor, two motors will probably be worse, but if you are riding at high speed or with mostly hills that required the motor to stays at the upper levels of current, it’s almost certainly that two will be better for efficiency

It’s ridiculously how much loses happen due to the motor resistance, specially in direct drives, I think both Hummie and the R-Spec have around 40 miliohms phase resistance, that running at 60 A is 216 W of loses on EACH motor

That’s exactly what I will test as soon as the weather gets better in Germany.

If I’m reading that correctly, then basically Benjamin says:

Adjust your gearing as appropriate for the desired max speed bearing in mind that your max motor RPM will be 8600. (All of this assumes 14 pole motors.)