We are happy to announce Metr Pro UNITY edition. It has been in the works since the beginning of this year and is finally ready!

The most important feature is EASY INSTALL
https://giphy.com/gifs/eKCrMsVRbow2d2974s
INSTRUCTIONS:

Metr Pro UNITY has a newer nRF52840 chip from Nordic. Otherwise it is the same good and proven Metr Pro module. It works as you would expect, just in a different form factor: 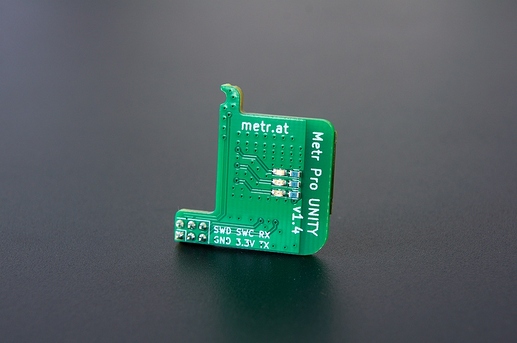 We are getting feedback from our beta testers @mackann @StefanMe @janpom and so far only found one software issue that we want to fix before shipping the modules to everyone. This is purely software, the hardware is ready. We expect to ship the modules next week.

All of this stuff:

Hey everyone! Together with @hexakopter we present you the all new Metr Pro bluetooth module! It is based on the latest tech from Nordic nRF52 and packs a punch! Hardware Features Metal Shield for interference protection. This is very...

yassss. les space consumed by wires in the bioboards builds… and in my builds…yaayyyyy!

There’s no iphone love on the FocBox UI. Metr.at has all the iphone love, even for apple watch.

I will update this post with a more detailed explanation and description of the benefits later. But to have some things mentioned in short:
BLE security with Elliptic Curve Cryptography and Man-in-the-Middle protection, OTA firmware updates for the Metr Pro UNITY module, OTA updates for the UNITY firmware, automatic BAUD rate detection, useful status LEDs, support for many apps including the metr.at app for iOS and Android, support for Apple Watch, support for Android wear, realtime data for dual and quad setups, records for dual and quad setups, different modes, audio announcements, possible to change all the available UNITY settings, display all faults and all other benefits the “standard” Metr Pro module also have.

@rpasichnyk @hexakopter can we conformal coat the PCB? or is it already coated?

Nothing compares to these modules. The ride recording and simple browser/forum compatible stats output alone is amazing enough.

Yes maybe its a closed system with proprietary hardware but these things just have it all.

can we conformal coat the PCB? or is it already coated?

I think it should be no problem to conformal coat the PCB. They are not coated from us. The Metr Pro UNITY module sits protected in the silicone case of the UNITY inside your boards enclosure, so it should be pretty safe. But feel free to add conformal coat to the PCB and make sure the 6 metal pins used to plug it to the internal UNITY port are covered with tape before.

Is there a regular metr pro thread?

No, there is no regular Metr Pro thread on this forum yet. We will create one later, because we are very busy with the new Metr Pro Unity module at the moment, so all of you that already ordered or will order in the next days will get their modules shipped ASAP.

Didn’t want to wait for ios compatability on the unity and added features and security + a solid connection got my vote.
purchased!

Metr is like what the unity app should be in the future… far future!

Something I just thought of but wondering if I would be able to use bluetooth headphones while my phone is connected to the metr? I have an old phone I could use instead if there were any issues

We have to test that. Modern phones can stay connected to multiple devices like smartwatch, earphones at the same time but its also depending on the connected device (metr).

Something I just thought of but wondering if I would be able to use bluetooth headphones while my phone is connected to the metr?

I can confirm that it is working. Tested it right now with music playing over BT headphones, data shown on the Apple Watch and the smartphone record data all at the same time.

And with the announce feature of the metr app I got my stats announced as defined in the settings. Music plays quieter and it tells me the distance every two minutes for an example.
Because it is working on the bench it should also work on rides, but don’t want to use noise cancelling headphones then.

@rpasichnyk I have the original metr pro and a unity. Am i able to use modes or is it still not working?