Is there actually a reliable FOC ESC?

Since I tried out FOC, I really prefer it over BLDC. However it seems that it is pretty tough for ESCs to handle. So I put an order on a never used focbox unity locally in my area, thinking it will handle FOC. However lately I have read about people saying they have issues with their unity, even some that throw them of the board.

What other options are there? I have a Flipsky dual 4.20 plus in a drawer somewhere, but I have also read that running FOC on 4.12 hardware is just begging for problems. Is it necessary to order VESC 6 from Trampa to have something reliable in FOC?

I am very confused and frankly pretty torn on what to chose. I just want to have a VESC that will not blow or suddenly apply full brakes.

Maybe I should just stop listening to what people say online… As the people with problems seems to make sure their voices get heard, while the people that do not have issues just keep riding.

I’m riding two unities (3 really) with zero problems from day one, so are literally hundreds of other people. One of them is even on stock firmware because I’ve been too lazy to push update. Just get on it, ride it and worry later

This is the ultimate suggestion, that’s an esc that will outlive your children.

I’ve heard this too but I highly doubt Frank/Ben would produce a dual one. It’ll be two strapped to a plate surely?

that’s an esc that will outlive your children

it hasn’t met MY kids…

same. Unity is where its at. Provided you can find one.

Not a single mcu though right?

Frank will rape me if i put a picture of it here tho, So I’m not going to for once…

@Brenternet its one ESC thats duplicated on one PCB with alot of extra cream ontop. Not unlikly it has higher current rating than the current one. Hard to tell since its never tested tho.

Frank will rape me

I struggle with the downside to this argument.

Frank will rape me

I struggle with the downside to this argument.

Hey yo, send the picture to me, I upload it and then I’ll nip up north this weekend and catch a cheeky raping? 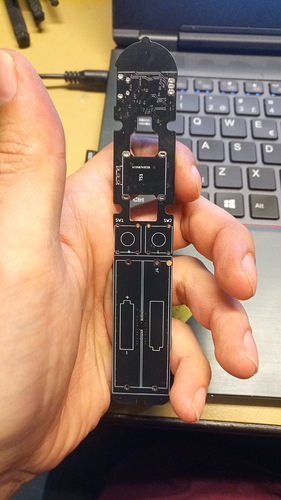 U mean this little fella thats gonna be added to my “solder asap” pile? From what I can tell the wand will work with NRF51/52 based dongles/recievers + vesc running updated fw.

Provided you can find one.

Guess I am lucky that I found one for the same price as enertion website without the long shipping time, import taxes and such.

Thanks for all the responses. I feel better about my choice of the Unity now and will ride it without concern.

I bet I can break one

Flipsky 6.6 dual has never given me issues in foc.

I’m a big flipsky fanboy, they will get better and better I’m sure but the “flip” part is the QC coin flip at the moment Haha.

If you get a good one you’re golden. Their cs is decent however. If only they vetted the production and checking better.