Is leanability only archived by bushings?

Im in the midst of building a semi small board with a 32“ bustin Hybrid Deck,caliber 2 trucks & caguamas. 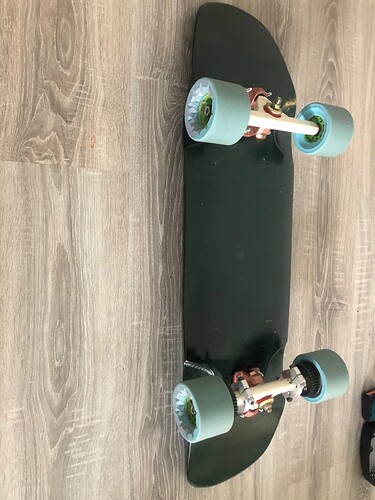 When i went for a first test ride with the still analog board, I didn’t really like it because I had like 0 lean. The Caguamas feel awesome though, first time on these.

So my first thought was that I have to change the bushings, the current ones are 2 barrel bushings out of surfrodz trucks.

My question is, are bushings the only variable that plays into the lean? Would risers help? 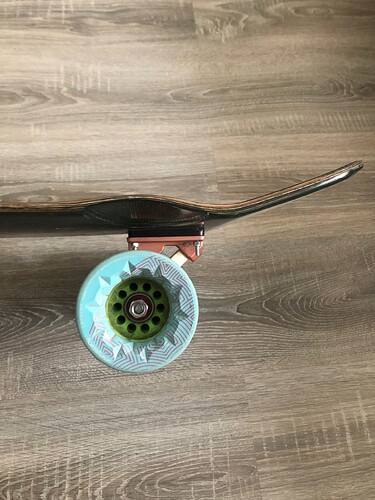 Risers mostly help with wheel clearance, if you stop leaning because the wheels touch the deck (wheel bite) then risers will help

To a lesser degree risers (specifically the vertical offset between the top of the standing platform and the baseplate) do affect the lean but not as much as good bushings. A higher deck platform gives more leverage the more the deck leans (the edge of the deck moves away from the center axis) which makes for a more divey feel, a lower deck platform (like drop decks or drop through mounting) have the opposite feel and will fight to turn more which makes them feel very damped (good for speed and poor technique but less fun)

I would go for some Riptide Krank bushings with appropriate shape and duro, TKP bushings are usually harder than RKP bushings so they are probably fighting you, go for something like canons and chubbies in low duro for a very linear feel or higher duro cones for a ton of lean

Lean is almost entirely determined by baseplate angle, as you’re trading off lean with turn. If you can get different angled baseplates, that would do a lot more than bushings will.

The alternative to risers is a rail adapter

Aside from the angled riser suggestion already mentioned, I’m quite surprised by the amount of exposed thread on your king pin. You could fit another bushing or two in there! Assuming this is the original kingpin, that much leftover could be due to bushings that aren’t tall enough for your truck design, or lack of washer on the boardside bushing. Or that the bushings are extremely over tightened. Both things would affect the intended truck operation.
You also have a massive cup washer in there, does it not limit the movement of the hanger?

Bushings control how much the truck articulates, I’ll come back to Truck Articulation in a moment.
But as far as bushings go, hardness/softness of the bushing are factors, but another very big factor is how much the bushing is restricted by washers/the bushing seat. Cupped washers and a restrictive seat can cause a bushing to reach the end of its travel early. With flat washers and unrestrictive seats you’re more directly relying on the hardness of bushing to control how far you lean.
On a topmount board you’re probably going to want to do some messing around with washers to get the lean you want without wheel bite.

Next factor is truck height. ( roughly the distance from your feet the the axles )
Risers give you additional leverage and control authority over the trucks, and the bushings. This helps trucks to articulate further and can make the bushings feel softer. However, having more or less leverage give a particular feel, and you’ll generally build a board so the height caters to the feel you want rather than using it to influence other factors like lean.

I wonder how Ackerman style steering like with the Juma Type 200 Trucks changes any of that.

Probably pretty similar.
I wouldn’t suppose nothing is changed, but I’d probably need to get my teeth into them to say any specifics.

Probably working from a steering angle instead of a pivot angle. Really its the same thing just each wheel gets its own. The linkages might be changing the leverage ratio, but changing the angle the trucks are mounted should have the same effect on steering. Changing the angle of the forces however might not make the truck very happy. Looks like it was designed with the weight coming from a specific direction.

Since they’re using a compression spring I’m guessing truck articulation is set by the spring travel and doesn’t change with resistance level. Unless there’s an adjustable mechanical stop somewhere like with a grub screw articulation probably doesn’t really change.