I’m starting my battery build in a few days and I had a few questions.

My goal is to get around 40+amp from my battery.

thank you for your time.

10 awg is a bit of an overkill for 40 amps. 14 would have been plenty. Looks alright though

wow that was fast thank you. I was worried that one wire per series connection or the nickel tabs might be to little.
What kind of amps do you think I can pull with my current setup?
Also wouldn’t the 12awg wires on the vesc and motor be a bottle neck? 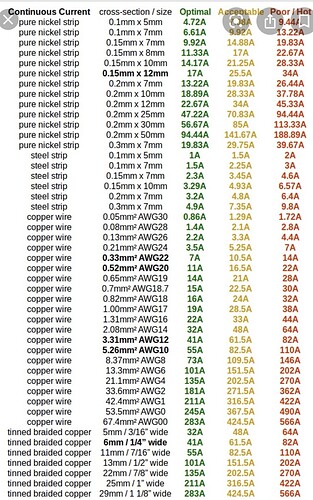 this chart may even be a bit conservative. In our application we don’t really use “continuous max” if you set your controller to 40 battery amps you won’t be pulling 40 amps all the time.

so can I set my vesc at like 60amp for the batteries?

I used to do that configuration before I got on to fat nickel.

If it were my battery, i’d weld the series tabs first and then weld the parallel strips over the top. You need the best/most solid connection on your series tabs, as they will be carrying the most current. Doing them first will give them the best chance of maximising your current carrying capabilities.

Also I would suggest that you move your tabs to the centers of the groups, rather than at the ends like you have them shown. This will reduce the amount of series current that needs to pass through the parallel strips.

Your bottleneck is going to be your nickel in this circumstance.

If you want to maximise your battery efficiency, and don’t want to buy bigger nickel, I would suggest just running a tab off each individual cell and joining them all with the series bus

I would also reflow those tabs. Look to be sitting on top a bit and ne appears cold-ish. 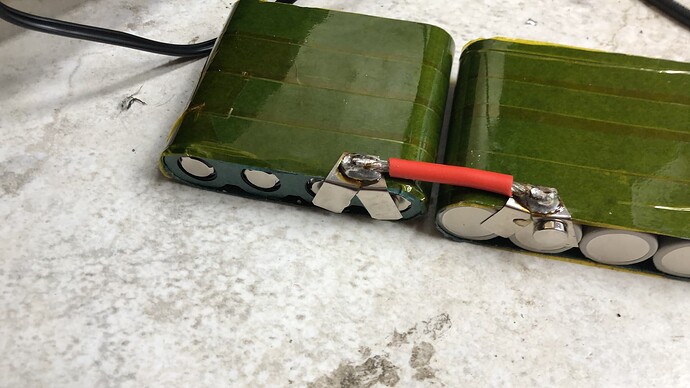 Idk how you’re planning on installing them but from that last picture it looks like you might be thinking of stringing the groups together in this direction? If so, it’s better to make the battery cells point along the length of the board instead of sideways across the board, so that the flexing of the deck does not put stress on the welds.

As said above the battery can definitely do a lot more than 40A with decent welds and cables, but I don’t think that ESC can. You’ve got one of these guys right? 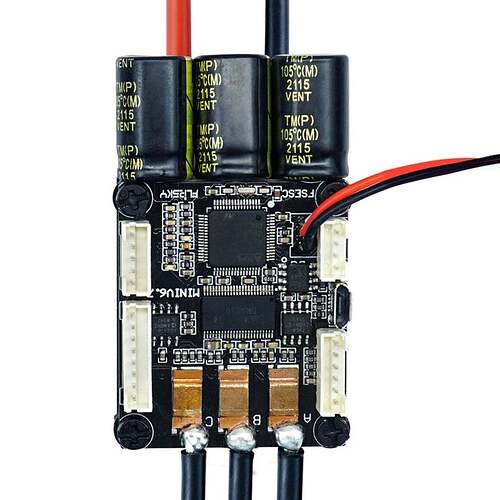 FLIPSKY Mini FSESC6.7 70A base on VESC6.6 With Aluminum Anodized Heat Sink

The circuit has been updated a bit, but it’s physically very similar to their old 4.12 and 4.20 units that claimed to be 50A ESCs and absolutely are not capable of that. Even with better components, it’s so small that it just can’t deal with much heat at all, that’s why the physical similarity is important. Anecdotally, I blew up my 4.20 after a week, and @b264 with more experience gives 25A battery as his safe limit I think. I’d personally start there and check for temperatures regularly until you can have some confidence in going higher.

It’s unfortunate that it’s not a widely tested ESC yet because I don’t want to tell you to limit your power way below what might be fine, but if you’re new and you’ve bought a bunch of stuff and are excited to go I also really don’t want to advise 40A and have it die on your first day

thanks for your response.
originally, I wanted do the series connections first like you mentioned, but I already welded 4 parallel groups, so I can either the rest your way or I can continue and make them all the same, which would you recommend?

Ideally I would like to do it that way, but it would make the battery wider and I am planing on making my own enclosure. its going to be pretty thick so I need the batter to be as slim as possible.

Thank you for you advise.
I plan on making some sort of aluminum plate for my enclosure and attaching the vesc to it. hopefully it will help with cooling.

Up to you. Its not going to hurt to change it up now if you so wish.

they have ABS bolts holding the heatsink on…

Even commonly used nylon bolts would have been better.

Looksnlike you have got good responses to most everything else you asked, so I’m just going to pop in to say

You should never be soldering directly on top of the cells. It allows unnecessary heat to cook the electrolyte in the cells, and can lead to the cell venting or going into thermal runaway.

I would advise you that this is a decision between packaging constraints and fire safety. Batteries have popped their welds this way before. Unless you have a very rigid deck and the p-groups are isolated from its motion, you should at least have a way to monitor your pack easily to spot a bad cell.