I DIY-ed a Single Direct Drive with Calibers and Hubs

I was inspired by Fliesss and @rey8801 on their DIY Direct drives hence i tried to make my own.

I’m not going for a high torque set up because this is for a lightweight cruiser build, hence i went with a single.

This current build was previously a gear drive, but had bad ground clearance on 97mm wheels, so my two options were to get/make a small gear drive, or a single hub/direct drive.

HUBS? Naaah, so let’s go with a single DD. Here’s what i did.

I got hold of a hub with one of these square channels, i believe this is an Inboard hub. 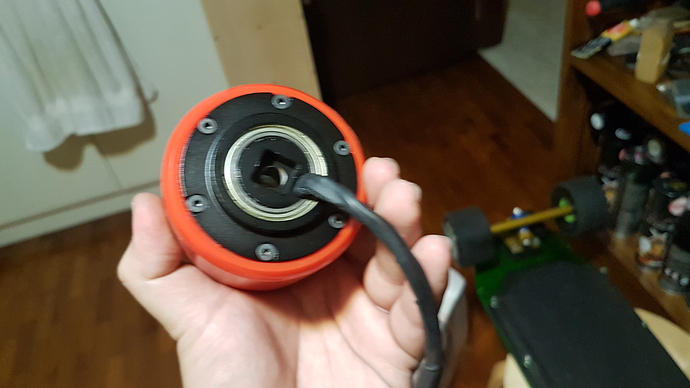 So uh i removed like 55mm worth of hangar.

Then it’s to file the square channel for the stator to sit into and not spin.

And that’s the ‘finished’ drive. The PLA adapter is just for test fitting, the final one will be printed in Nylon.

And here’s the finished look. Do note that this is purely #forscience and chances are that the axle will probably bend eventually. I’m not a heavy rider and this board is planned to be used for short distances on flat-ish terrain like going to the mall nearby etc. So fingers crossed.

Now, we’ve reached a wall. When running detection on both BLDC and FOC, there’s a weird crackling sound in the motor, as if there was something broken inside.
(what can i expect from un-named chinese motors am i right)

FOC was able to pass detection when increasing the amps to 10A, but when throttling, the sound and terrible vibration is still there. Ok you know what, listen for yourself from the video here.

I do plan to remove the motor can itself to check, but i have no idea how to remove it even after removing all bolts, as if it was pressed shut or something. I am open to other motor alternatives to retrofit on as well, as i have a couple spare hangars willing to test again FOR SCIENCE!

Am looking at the low kv 6355 Maytech motors, but am open to suggestions as well!

super nice project. Then sound is indeed pretty bad. Did you tried the motor before that you mount it? DId you have to drill the motor central pipe or was already 8mm?

My two options could be:

The motor’s hole is 8mm by default, so it slid in the axle just fine with minimal play.

Also, i tested the board down the hallway in my apartment, it has power to push me, but brakes are literally non existent. This is a 5 meter hallway we’re talking about haha. I guess i’ll have to replace this motor to something more powerful.

yeh sounds like a motor problem then. Did you try to measure the internal resistance and see if there is short inside the motors?
Probably the easy solution is change the motor.

I remember DD last year were so rare and expensive and now we can easily make them. That’s noice progress

Parts like these were somewhat available last year, i guess few dared to try it since it sounded so sophisticated when it was just released.

Then again, mine is purely experimental and i’m not 100% sure it’ll hold up in the long run. If i could do it again, i’ll try to remove and add a thicker axle with a stepdown to 8mm for the wheel.

Tha how I did in my first prototype. Of course it comes with a bit more work but it works better for sure.

Looking back at this thread again. I still have this DD abomination, but i was thinking if i hook it up to a pre-programmed ESC like a hobbywing one for example, it might be able to work.

When i set it up on the VESC tool it had the annoyingly loud cogging sound when running detection, but yet the motors spin up fine…

@BillGordon got any hobbywing ESCs lying around? Figured i’ll test to see if it works first than buy one.

That’s the plan! I spent a whole week to make this and i’m not gonna let it sit in the esk8 cabinet forever.

Yeah, I’ll bring you one the next time we meet up.