How to use dual VESC for Robot Control

I have two VESC 4.2 boards (Mini Flipsky 4.2) and two skateboard motors. I have tested both the motors with an RC Controller (FSi6/FSi6S) and they are working well on PPM (Hall sensor mode), Forward & Reverse.

How do I implement this on a robot with RC control? When I spliced the receiver to both the VESC’s, as expected it works by moving both forward and reverse. However, what I need is to use the wheels on a skid steer control so that when moved sideways, one of the motor moves while other slows or halts.

Can someone guide as to how this can be achieved? Should I have to use an intermediate board to control the direction and steering? If so, what to use; Arduino, Flight controllers, or any other suggestions?

the wheels on a skid steer control

Could you explain this a bit, or maybe offer a photograph? I don’t understand what this is.

What does the human input device look like? How does it work electrically?

Correct, same as many types of industrial machines

I meant the input device. What is being moved sideways to create the skid steer input signal?

That’s why the “sideways” confuses me. Those go forward and backward.

As far as I know, no one is using VESC for directional movement. Esk8 only needs forward and reverse. Like @b264 asked, if you need an joystick input of left (for example) to spin one motor forward, one motor reverse, you need an additional control board.

Or… two remotes duct taped together and good hands.

I don’t even understand how OP wants to control it yet.

Is each lever on the FSi6S just controlling one motor?

I’m assuming he wants a single left/right joystick to operate skid steer control. So it would need to send positive/negative signal to each motor from one input. I think. Its not clear

Well. Thank you for the questions. I am building a robot using skateboard motors. For now I have connected two motors and using a FSi6S RC controller. Initially while writing this question, I was able to control one motor. Now I connected two motors to Channel 1 and Channel 2 of receiver and it seems each of left and right sticks are controlling one motor. I need to use a single joystick to control front and back of both motors. For example, moving the joystick front should rotate both wheels forward and back both backwards. However if I move it sideways, one wheel should rotate and the other not rotate.

I feel like you would need to write some custom firmware for this.

There would be a need for one wheel to go forward and the other to go backward. Having one wheel idle would not be great.

And then I assume the ratio of forward/backward would change, the further left/right you move the joystick. 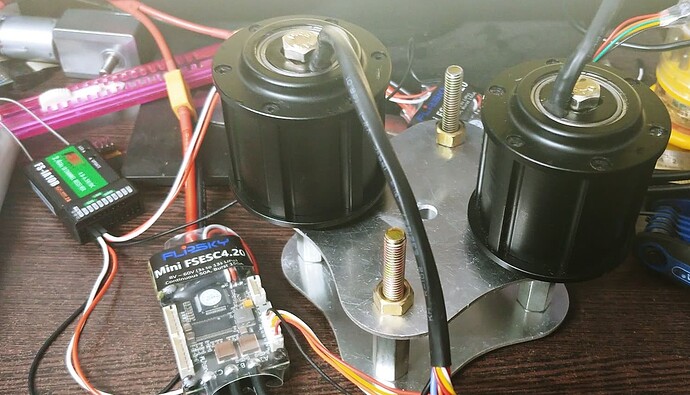 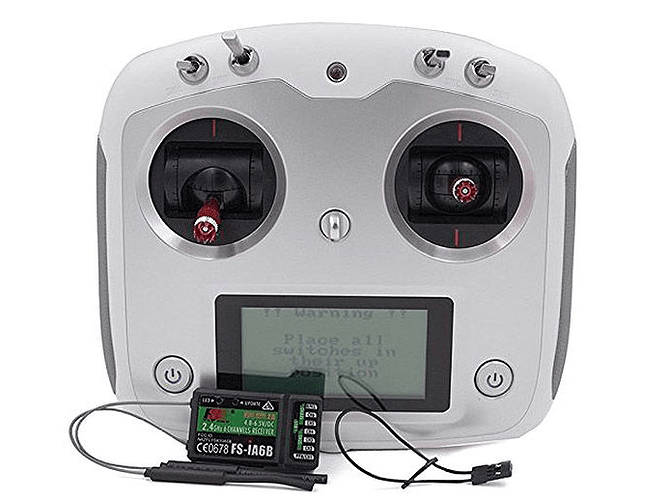 This is my existing bench setup. The transmitter and receiver is shown in the second image. I can add a custom arduino or pixhawk board in between to control the motors, but was wondering if there is a direct solution already in VESC.

This is correct. If I am able to achieve forward and backward independently, I can work on it further.

I’m not sure. But @DerelictRobot may have a good idea. Or maybe @ducktaperules

ok. Waiting for anyone to show some light on this.

Imagine a maytech R2 style rwjite but the throttles are divided into two (each side controls one vesc). That would be cool. Possibly gluing two avio style mini remote together might be interesting.

VESC no, but you might be able to configure skid steering on the TX itself. I know some of the more advanced TX have joy muxing.

Otherwise you’re looking at a microcontroller in between the receiver and the ESC to handle it.