How important is ventilation when soldering? 😷

I am always really paranoid when soldering that I might be positioning the whole household. To the point that I now only solder outside in the garden with an extension cable, which is super awkward. Also the problem with that is I live in Scotland

Where do most people solder?
What equipment do you use to stop lead contamination? (mat/open window with fan/face mask)
How do you clean up afterwards? (Wash hands, wipe down bench with disposable cloth, leave room unoccupied)
Once solidified, are the soldered joins still a source of contamination? (Should I be washing my hands every time I touch the electronics)
Am I being too paranoid? (I’ve got three young kids that lick/eat everything)

I don’t really ventilate. I mean I open up a window when it gets really bad. Otherwise I see no point

read a bit my topic here

Here is a tutorial on how to solder. We will discuss everything from how-tos, what tools and tips & tricks. - Here is a list of what you need. Tools | What you actually need"] First off, a soldering iron, not a pistol. Basically a long stick with a metal rod. Solder. It needs to be 60/40 that has a rosin core. People use 63/37, it is personal. Flux Helping Hand/soldering Jig Brass coil/or just use a damp cloth that you don’t need. Desoldering Braid - Sooooo many soldering irons! Which one? …


I usually open a window and have a big fan push away the fumes. I would try to breath it in the least possible as I really don’t think it’s that healthy but If you do it rarely then i guess it’s alright?
It like anything imo, like smoking etc… 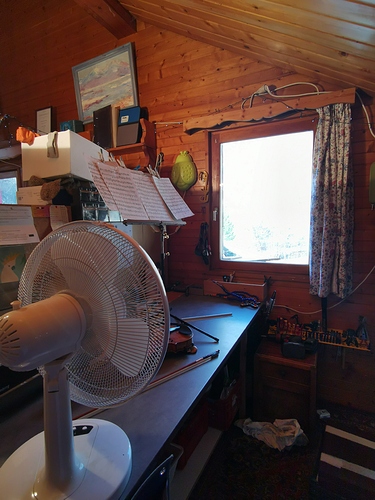 Welding is a another story

Best practice is to use a fume extractor and have a fan or central ventilation running.

This helps cool down the joints when you’re done soldering. I’ve screwed up way too many joints because I pulled away when they were still molten.

Inhaling fumes won’t kill you, but it’s not good and stings like hell.

I open a window, nothing else. But I definitely sometimes feel that the fumes are doing something. Not sure how severe that is though. I guess the smoking analogy is correct.

Please note that you should also wash your hands after touching the solder. Lead is very toxic.

I sometimes solder for hours, which makes a lot of fumes even in my 6m high working space, after a long period of soldering, and smoking I got phneumothorax, which is probably caused a little by soldering, little by smoking and little by my nature, so anyways I made myself a soldering space with 2 fans pumping out the fumes outside my working space.

Basically if you solder only a few wires every once and a while your fine.

Like most people I am often a bit blazae with my health, however my main concern is the rest of the family.

I assume that if soldering in the house then the lead particles in the fumes will eventually settle on household surfaces. With this in mind, I’ll probably just continue to solder in the garden.

lead is an issue, but lead isn’t the issue here, if you use unleaded solder it’s still poisonous

You could create a cold joint with a fan, if it cools down too quick.

a fan behind your back is fine as long as it’s not blowing directly on what you’re soldering, it’ll still push the fumes away

not sure what you get from solder, never wanted to find out after getting metal-vapor fever once from welding.
shit sucked – basically really bad flu for 2 days. I think solder fumes wouldn’t be as bad, but…

ask @MartinSp how important ventilation is

I leave a box fan on low nearby so it bows the fumes out of my face and I can see what I’m working on.

If you’re not doing it in the space the size of a closet I don’t think you even need to leave a window open. Just don’t aim to breathe in each and every puff unless that’s your thing; I don’t judge.

afaik Martin was hospitalized due to inhalation over a prolonged time. I think he is recovering still.

He was using a regular soldering fan/filter, but he spends a lot of time doing soldering work.

Outch yes that’s nasty, thanks for the warning!

Well I use RoHS stuff, unleaded, still hurts my airways. Isn’t it the flux that’s very toxic? (Besides lead)

I don’t use ventilation, but I have built the habit of slowly blowing air out of my mouth towards the solder action to blow the fumes away, turn slightly to the side, inhale and keep blowing those fumes away. I’m too lazy for an extractor, but still don’t wanna inhale the fumes.

You don’t need to blow hard, just enough to blow the fumes away so you can avoid the majority of it. In the case I’m doing a lot of THT components I might get a little fan to get some extra airflow away from head.