Ghosts in the Machines [SRO]

So we observed some weird shit at CarvePDX and I think some of us need to talk about what happened for emotional support and also to figure out what the hell was going on.

This didn’t happen to me personally, but I was present two of the times it occurred, and it happened to more than one person simultaneously.

So that happened? You know the circle/square shaped pads in the road at stop lights? Those are inductive coil sensors that are used to detect the presence of a motor vehicle above them. 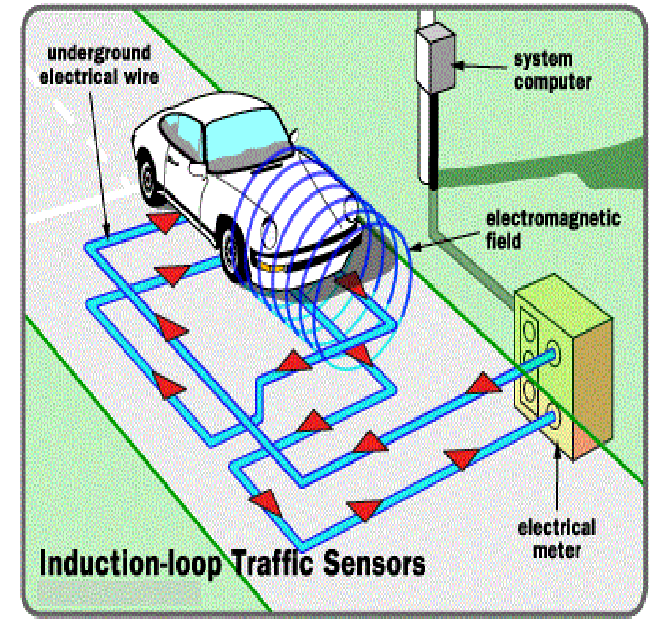 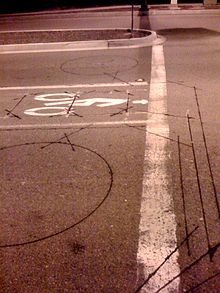 Vehicle detection loops, called inductive-loop traffic detectors, can detect vehicles passing or arriving at a certain point, for instance approaching a traffic light or in motorway traffic. An insulated, electrically conducting loop is installed in the pavement. The electronics unit applies alternating current electrical energy onto the wire loops at frequencies between 10 kHz to 200 kHz, depending on the model. The inductive-loop system behaves as a tuned electrical circuit in which the loop w...

On at least 2 occasions, we witnessed multiple boards with Stormcores failing to respond at all to throttle while sitting at a light on top of these inductive loop sensors.

It appeared to put them into a boot loop where they were rebooting/unresponsive, right until the boards were moved physically away from the inductive loop sensor in the street.

We’re going to need some big brains and to gather some data to get definitive answers- I’ll poke around and see if I can’t find the company who services these in Portland and ask some questions.

The stormcores just rebooted all at once. Definetly environmental

I also had my puck disconnect / lag at the same time as a bunch of other people at an intersection in downtown Portland. I’m still not sure what that was about, but luckily it went away after a few seconds

This was determined to be a stormcore issue, not at all puck related as multiple non puck boards had the same issue, including mine

Yeah @Avi there was a large group of us, and about four to five of us had our stormcores go into a boot loop, which feels exactly like a remote cut out if you don’t know what you’re looking for. So can any other ESC cut out

This exact thing happened at least three times during CarvePDX

Our shit conclusion was the inductance from something was fucking with the antispark circuit. It only happened at a standstill so it wasn’t really a safety thing

Specifically, the inductance loops under the pavement at intersections that detect cars in order to make the light green. My theory is that Portland is trying to better detect bicycles, and has increased the power of these coils to achieve that goal

The reason why I think this is because I watched the signal with my OSRR and my power button light, I picked my board up and rolled it about 10 ft away from the coils in the ground, and the board functioned the perfectly again. Not even a reboot needed. This exact sequence of events happened to me personally three times during CarvePDX. I no longer wait on top of those coils, I just run the red.

Insightful commentary from Mooch, as always.

Standard RF shielding won’t work if you’re trying to block a low-frequency magnetic field. Try mu-metal or you can even use nickel sheet to redirect the magnetic field around the electronics.

Higher frequency magnetic fields I’m not sure about but your Google-fu would answer that.

The problem is finding out what those coils are actually putting out though, low or higher frequency fields. Hmm…actually, it could still be RF interference coming from the electronics driving the current in the coils and standard shielding might work.

What equipment do you suggest I use to find this out?

Not sure. RF meters can measure the field strength for a certain frequency range of emissions but you would need a magnetometer for a magnetic field to determine its strength and frequency. You’d have to rent the equipment.

Maybe checking on any online announcements or descriptions of the tech used for the coils might give you the answer though? Or perhaps the name of the company that installed the system and you can speak to one of their engineers.

I feel like the only observations I can add here are that I was not impacted by this at all, yet was sitting on top of the same loop sensors at the same time that others were impacted.

I’m running a DIY built Lonestar with dual 100S stormcore, where every single impacted board was running either a 60D or 100D. (Perhaps impacted folks can sound off with the ESC they were using?)

19 posts were merged into an existing topic: Derail Jail 2022

Until these guys make motor controllers that can move my fat ass up a hill, not really a viable option.

Also there were VESC based ESC (stormcore, too) that didn’t suffer this issue, so your response seems a bit kneejerk.

We’re here to discuss why this could happen, not make unproven proclamations based on hardware that doesn’t exist in this market yet. In fact, we don’t have enough data to make any claim at the moment, this issue could very well impact other ESCs.

Was this at CarvePDX? And which remote were you using? Vibration on a puck could just mean a disconnection- which I believe is a bit different than the issue folks experienced.

It was a puck.

which I believe is a bit different than the issue folks experienced.

Maybe, just thought id chime in since i never thought anything of it until this post

FWIW my Stormcore 60D+ was in a top-box too, aluminum heat sinks top and bottom. Mounted upside-down.

Thanks for creating this thread btw

Happened to me at Carve.

We were stopped at a red light. Light turned green, everyone takes off except 5 of us who all go “WOOOOOAAAAAHH! WTF?”

I looked at my maytech split trigger remote and it still showed solid connection but my board would only accelerate a foot or two before full braking randomly. Pushed the board out of the intersection and it was back to normal.

The extra weird part is that it happened the next night at the race track as well. I doubt there were any induction plates in the play ground. Right when the goofing was over and we were about to head out, I actually saw my board shut off (stormcore 60d+ led button turned off). Board timeout is set much higher than the break I took riding so it shouldn’t have auto timed out. I was literally riding it a minute before it happened. The second I touched the throttle, the esc “woke up” (led button came back on).

Like @rusins, my stormie is flipped upside down with a heat sink on it (top of the box) 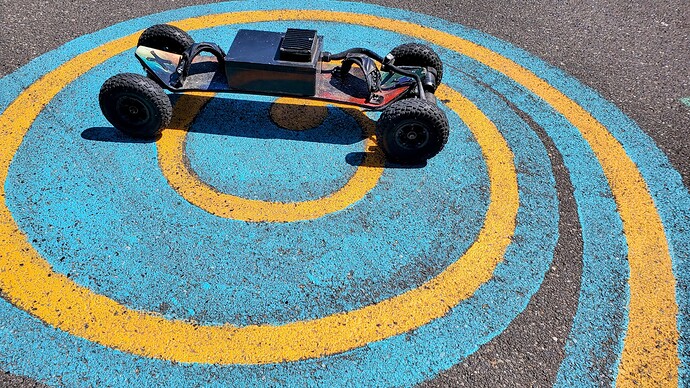 Insert random long rant about why EMC testing and radiation immunity is so important in safety critical applications. I know 0 distributors of VESC based hardware and addons that can show any data or testing. Which in the rest of the electronic consumer market is mandatory to even sell shit

Arguement before has been that its too expensive and volumes are simply too low or that its strictly hobby use and should be viewed as such. Stopping in an intersection in traffic kind of forces us to start paying attention to this tho.

So for now. Ride in traffic at your own risk. None of the hardware in your board is certified from any safty regulations to work in your benefit.

All of the ones that I’ve tested did, I’m just making a personal choice to not take the chance by trying other vesc based ESCs

It wasn’t clear to me that you were sharing that your previous VESC based ESC ran into this issue, apologies.

Which ESC were you using? What did you observe, and is it reproducible on those traffic sensors?

I know 0 distributors of VESC based hardware and addons that can show any data or testing. Which in the rest of the electronic consumer market is mandatory to even sell shit

Perhaps the discussion can start here if we can gather data on these incidents in a reproducible manner?

This was definitely a shocking thing to see- there were probably 30 of us and we watched the folks on top of these sensors all have issues simultaneously- so from an empirical standpoint it sure looks related.

Stopping in an intersection in traffic kind of forces us to start paying attention to this tho.

this is me every day, and I worry about this kind of stuff a lot

I think something similar happened to me with my TB6s a while ago.

Atleast IIRC they were TB6s. I was at a light and I stepped off my board to go and click the pedestrian cross button…after returning to my board I wanted to inch it forward just a bit before I got on it…and for some reason instead of inching forward it SHOT at full speed into traffic and got ran over and I needed a new deck after.

Remote was a VX1 connected via UART and I was using a flipsky antispark. Nothing like this has ever happened to me before that or since. I wonder if it was just an isolated incident of a VX1 remote flipping out or if these magnetic fields had something to do with it.

Who else was affected?

It’s also worth mentioning that there was an instance of this glitch at CarvePDX that occured when we were traveling across an overpass/bridge. We were in a car lane, all of us were moving the whole time, no one stopped until the glitch started happening. It seemed to occur right at highest point of the overpass.

All the same people were affected, all as soon as they passed over this one spot, approximately here:

We were traveling west across the bridge/overpass coming back from the Gateway Green on Sunday.

For me, it was at the race:

And I thought the other time was on the way to the Friday night ride but I could be wrong.

Both days recorded weird mileage though

Yeah for real. If I wanted to learn about powewheels toy speed controllers I’d go the wowgo site. None of this low end ESC talk is on topic.

I will say I was with y’all’s like half the time and with @Yeahthatperson a chunk of the time. I didn’t get the same issues parked in the same areas.

Myself and @Boardnamics experienced non responsive throttle at the same place @jack.luis was the first to notice issues. I could full throttle my puck and it did nothing. It was an intermittent problem. Sometimes responding, sometimes not.

I was on an original 60d. I dont know about Kevin