I would like share with you my project, currently only scratches and build plans are ready so I really count on your comments

The idea is to create a board able to give me enough range and power to play it in woods without need to worry about battery. For city crawling already got Evolve GT, so no need to worry for “too much for city” 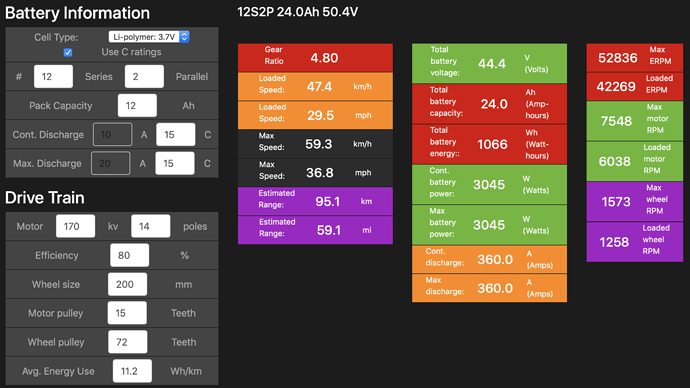 For a range I’m hoping for something around 40-50km, not sure if this will be possible with such setup, but we will see

As for now I got some questions:

Great to see you made it over and brought the thread wth you. Acount set. Welcome!

Good guys to handle the questions above:

Looks good to me.

Battle harden them and they golden. If you don´t expact them to break down withing the first 50km (doesn´t need to, but likely)

@Idea does some great work with his mounts. Can´t go wrong if you looking for a belt drive he is your man.
Would non the less have a look at gear drives as well. If you out in the woods than shit get stuck and can break the belt. that´s something you don´t want in the middle of nowhere.

They ok, but they also heavy comapred to a LiIon pack in that Wh size.

If they does, how much power they consumed from power outlet?

Has anyone got experience with Trampa Wand - I’m worrying it will be slippery?

@Lee_Wright is your man for this, or just read through the Wand thread.

Any other remote suggestions? I’m looking for something like Evolve R2 as for me it suites the most till now, but I haven’t tried any thumb controlled one to have compassion, all of them were triggered. From remote I expect it to have LCD with at least current speed and trip milage

I think maytech has an evolve style remote. some love it, some hate it.

Any other flows of my build? Don’t be shy I can take criticism if I’m doing something stupid

don´t choose too low ply for your deck.
order some spare wheels, inner tubes, belts, bearings and stuff as well. If you have the funds, get even a spare motor. things break down when you don´t want them to and waiting for new parts can suck. APS motors can take very very long to deliver if they on back order.
Get good protection. Helemt, body armor, knee pads, wrist protection, bumber pans etc.

Idea is indeed the man for trampa belt drive mounts, this is his latest version I just got in, think its V6.5

He only does 15mm pulleys now though

The wand is slippery, get a case or the trigger kit

Battle harden them and they golden. If you don´t expact them to break down withing the first 50km (doesn´t need to, but likely)

If there is any other similar motor on market I can always exchange that part.

Would non the less have a look at gear drives as well. If you out in the woods than shit get stuck and can break the belt. that´s something you don´t want in the middle of nowhere.

Was taking a look of them, but decided to go with belt, most likely I will be building case around belts, so things stuck inside it will not be a problem.

If this will be a case after 5C charging, I will exchange them. Will try to find any trustful information around this one. Exchanging for normal LiPo will be easier from budget perspective

Right, forgot about differences here and was start worrying about house fuses, silly me

I think maytech has an evolve style remote. some love it, some hate it.

Was taking a look of it, it looks not much ergonomic and compact as Evolve. On Evolve only build quality is a problem, especially around LCD which is not secure in any way and got broken on every gentle hit. Looking at Wand it got flawless build, but ergonomic is also questionable for me, even with added trigger - can believe that thin piece of carbon could be comfort.

don´t choose too low ply for your deck.

I’m used to have some spare parts, but in any case I still got my Bamboo

Thanks for your suggestions I will keep them in mind.

Lee indeed I’m basing my opinions on your videos

Can you please check how comfortable is to use Wand with Original Flatlands 3Ds? I remember that you were doing reviews of Pro, but can’t remember if you are in possession of Originals.

I think I will end up with Wand but with some custom trigger to it. I also don’t like that single point of contact on gauge, IMHO there should be some rail to assist that switch or something like that.

One more question that I forgot initially, what about water resistant? Assuming that I will have sealed case for battery and ESC, can I ride during rain? Motors will be ok to get wet?

I dont have the originals I am afraid mate, just the pro and it’s ok, it is slippy in thumb mode but in trigger it is not. However I dont like the trigger at the moment, there is a video tonight about it

I have been charging normal (not graphene) lipos at 4C with no ill effects.
I am certain graphenes would not break a sweat as long as you use a quality charger.

Belts vs gears: Been there, done that. Gears all the way.

WAND: Mine is waiting for me but it will be some time before I get a chance to try it out.

I would strongly suggest to never ride with your kid on the board.

Belts vs gears: Been there, done that. Gears all the way.

What pros/cons have you found?

I would strongly suggest to never ride with your kid on the board.

If you mean wild ride sure, but not for lazy traveling from home to kinder garden

Of course with right protection gear.

you could try this https://carvlab.myshopify.com/products/carvlab-esk8plate-deluxe-kit
https://www.amazon.com/Schwinn-Double-Bicycle-Trailer-foldable/dp/B00E3IGR7U/ref=sr_1_5?crid=2MPNPH6XY313K&keywords=bike+trailer+for+kids&qid=1568935096&sprefix=bike+trailer%2Caps%2C162&sr=8-5
but if your suggesting carrying your kid that sound very bad

Thank you for suggestion, I think I will take a look of it as it looks more ergonomic than Wand.

Guys, what do you think about that motor: 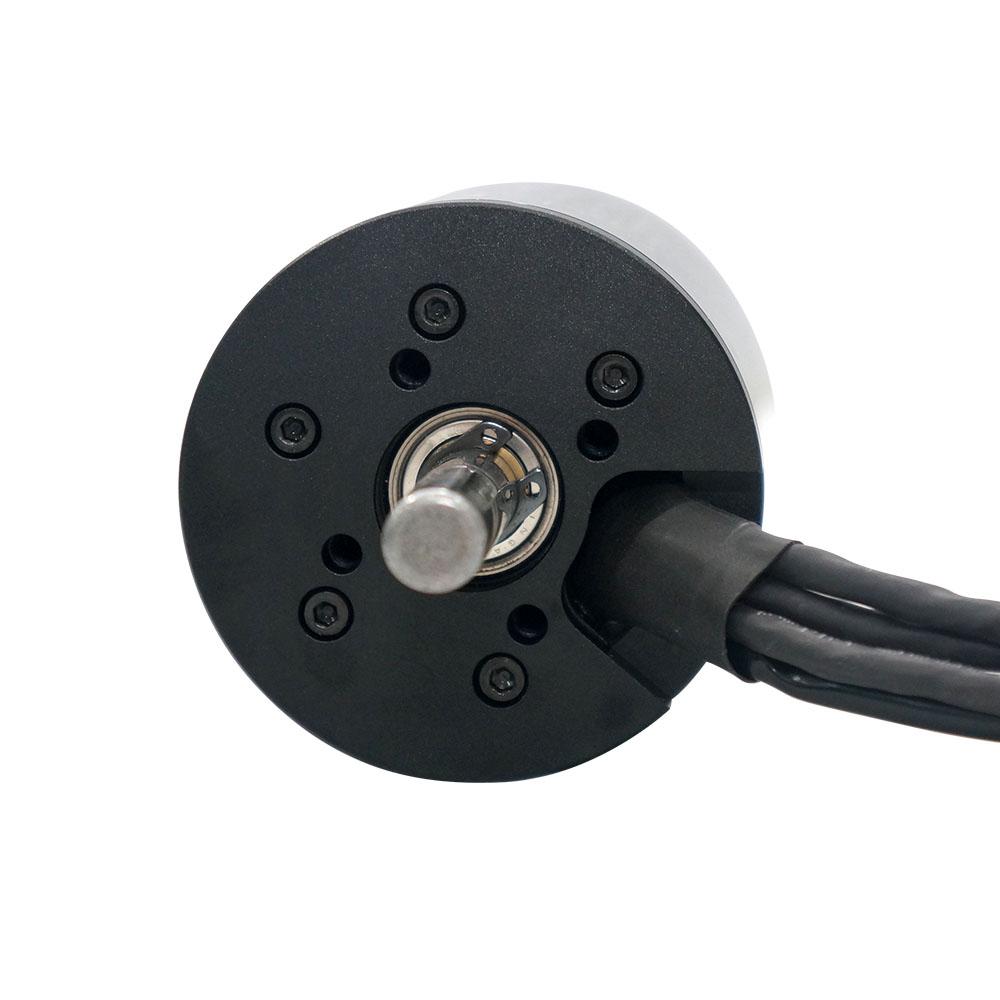 As I see problems with stocks on APS is still real I’m searching for alternatives and I am wondering if going for such sick length is indeed wanted. Maybe it would be worth go for 8072, what do you think?

This is going to turn out to be an awesome build!! Great parts list and if the calculator is accurate will be super!

Thank you for kind words. I hope I will be able to finish checklist before season

Right now I’m struggling with motor choice as my main candidate was removed from competition.

Project is moving forward, thanks to kindness of @IDEA got my board and few other things. Now its time to put this together what I already know will not be as easy as I thought 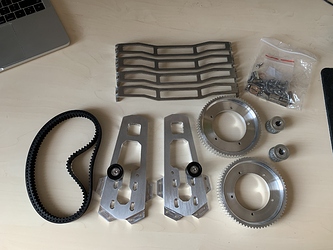 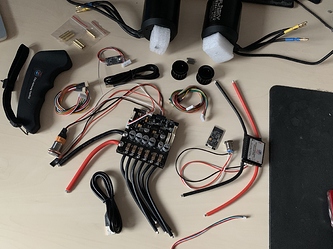 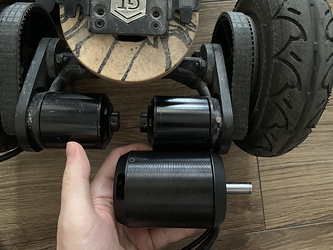 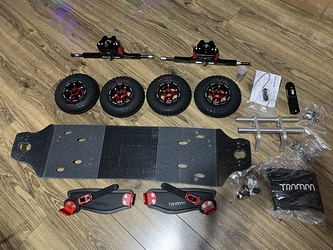 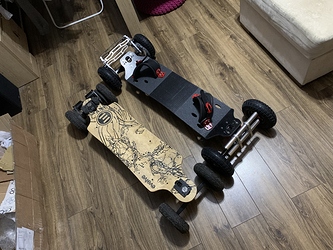 IMG_19454032×3024 3.63 MB
Got box for battery and ESC as most likely everything would fit there, not sure about correct ventilation as box is sealed, but will try find out that later (I’m thinking about external radiator, still keeping it sealed thought). I plan to place it on the back (same as Trampa Beast Box) as it will fit (I will omit cable routing problem), until I will not find a good reason to have it in the middle of board: 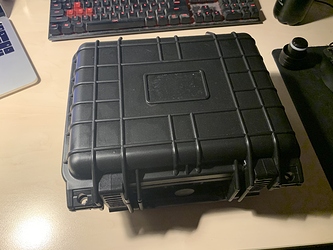 And here problem starts… Needed to reorder new cables due to incorrect thickness, few connectors and so on, so on…
When I was thinking that I already got everything my soldering iron died and needed to use other one to which I was missing transformator… but we are professionals, right?

There is plenty of things that I still need to order as soldering using 6s LiPo is not best idea due to small capacity. So I need to get some power supply for it, still can’t get 4mm banana/gold connectors, but this is minor issue… major one is to get batteries

To be honest… I cannot wait to drive it, but I think there is long way before me to achieve this

Got new power supply so I was able to do some soldering, still though need some terminations to put 200A fuse inside of “T” cables. 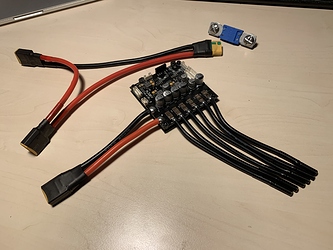 Time has come, got some free time during holiday so projects moves on

In the mean time boxes has arrived, good to have much more choices to test with: 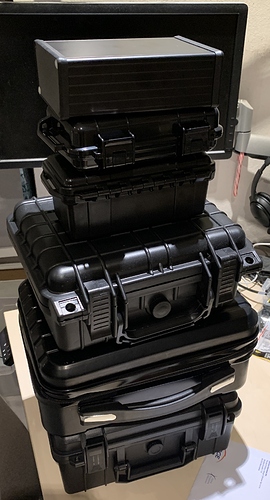 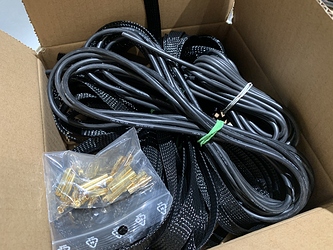 IMG_20144032×3024 2.53 MB
As there was not much space to put battery with ESCes on back of board (because of lack of space between box and tyres) I decided to go with “standard custom” design and dived ESC and battery. For ESC I have choose metal case to also act as radiator as I was reading Flipsky 6.6 Dual Plus likes to be chilled 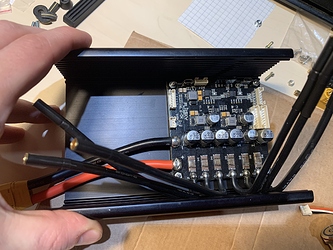 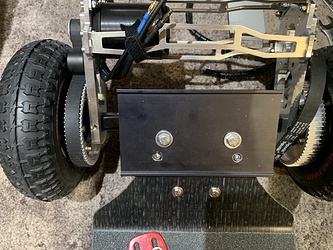 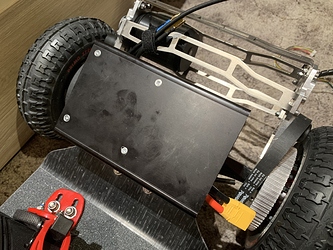 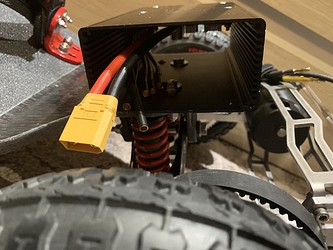 Got scared as FAQ hearing that noises during motor detection

Engines were mounted, cabling for motors were done, box was suited, so time for batteries… 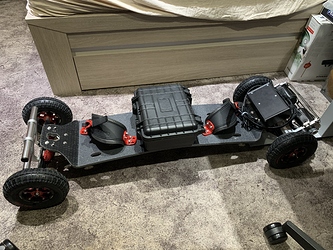 IMG_20274032×3024 3.54 MB
Box I decide to mount same way as Monster, using three screws with big washers, not sure thought it will hold on long, but will try as box got really think walls. If not… I will end up with Monster Box… cannot lose 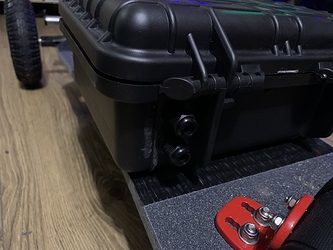 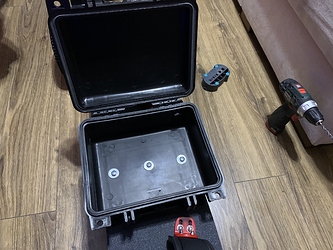 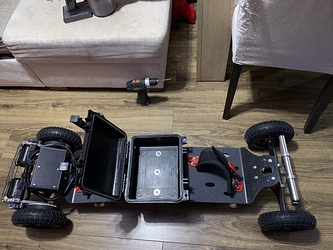 IMG_20324032×3024 3.2 MB
Battery arrives so lets fit them. Got resolder serial connector as it was too long and too stiff with fuse, but now it is time as possible and fit perfectly between batteries: 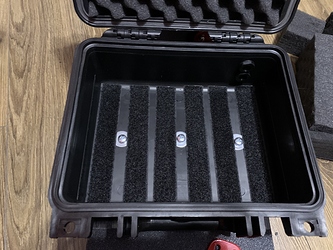 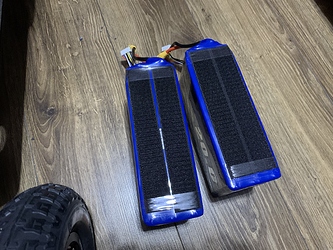 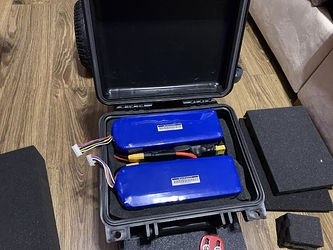 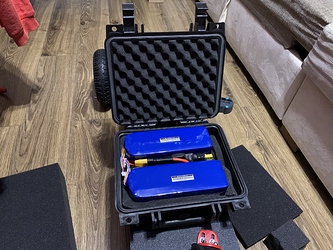 IMG_20354032×3024 3.46 MB
Now I just need to find a moment to finish power cabling and connections around ESC box, but for now everything is almost finished… cannot wait for a test ride 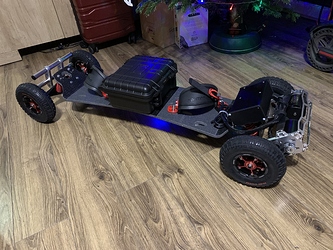 From the other things decided to not use Trampas LCD screen for battery level as I think I will be using the one on remote. Still not sure if I will go with Tramp Wand or Flipsky VX2, already got both of them and both are great. Wand looks wonderfull, but I think I got used to Evolve shape so it is strange to hold for me. I think few test rides will allow me to get answer for that question

One more important question, during test on power supply, during programming VESC or FSESC (don’t want to be bashed by anyone 8) ) I have spotted that wheels are not starting together, not sure if this is case of lack of power (PSU is 25A only) or other thing. I know about some issues with Flipsky ESC, but Track Control didn’t solved that. Sometimes I was also able to hit a moment and when one wheel was spinning, I was able to catch a moment and by releasing and pressing again trigger it was starting to roll backward… that was strange. Could this be my fault during engine detection or something? As later on I was doing manual detection on each of motors and cannot reproduce this behaviour. Problem with wheel not starting together persists, but maybe it is just part of smooth start?