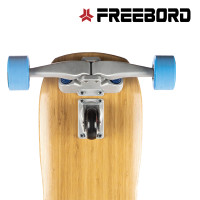 Freebord - The latest in skateboard technology

The feeling of snowboarding without the cost.

Is that a typo? “Freebord” means “Free Table” in swedish

“…makes it possible to carve deeper than ever…”

Isn’t this already a thing for freeboards? Was like 15 years ago I tried one though.

It is pretty novel… definitely a no from me.

not sure when I’ll join the MBS sect.

This is nothing new. It’s been around for a long time. At least 10 years since I first tried one. Freebord may be a new company but freeboards have been a concept for a while.

I think it was originally marketed for people that snowboard to continue in warmer season or without snow. The way you skate on one is very similar.

Actually I just looked it up, freebord has been around for a long time too. I don’t quite recall but I wonder if the one I tried was made by freebord? It was some dude that offered me to ride one underneath a massive highway underpass

Those trucks look super thin too

Will watch to see what happs? Never really been too interested in the push versions of these. Your ability to stop w/ a slide is really reduced b/c of the angle and you’re only using 2 wheels instead of 4, and imo these would only be fun down hill.

Leiftech makes the electric ones. The Summerboard looks like fun, but not very usable… This guys found a good spot to slide around in.

My biggest concern is the wheel size. Looks like it would be really not fun on most asphalt and only usable on smooth pavement

They had that split arm truck last year when they met up w/ Braille.

that truck design is stoked, and will certainly fix freebord braking, yet there is no single pivot. 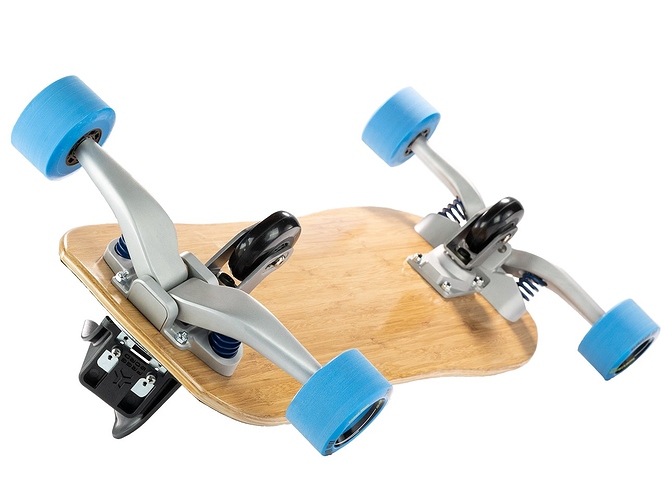 Yeah, I imagine the turn in suffers considerably with the split hanger design. Doesn’t mean you can’t achieve something similar, it’ll just be a different movement/mechanism.

Turning in a freeboard isn’t lean and turn like a skateboard. It’s more similar to snowboarding with pivoting the hips and weight distribution.

Totally, but the previous design w/ the normal trucks would turn in when you leaned either way. Turning in more or less and in the front/back depending on where your weight is.

Hmmm for emulating a snowboard, the turning of trucks probably felt weird as I can imagine adverse affects but yeah less turning for sure

It is probably much easier to ride with a motor.

Looks like they can bolt on to the current model deck.
I have been talking to a machinist who said he has an industrial 3d printer. I should ask him to print some caster+motor mounts. My plan was to use a 2 wire slip ring and have the VESC in the caster.

Closes today if anyone wants to grab one, or two.

I Want It All

Is the owner still a massive hobknob?

I was legitimately interested in picking up one of these but based on the attitude I saw from the company owner I’d just as soon not give them any money.

I got no clue, Bob who I emailed was pretty cool and very helpful. I mean for taking my money that is.

I wouldn’t focus on whoever’s running the show, just the dope people riding them.

Where did you see poopy behavior?