When I first got into DIY ESK8, I made a build with a Flipsky FSESC 6.6 that cost $179… That same chip is now on their page for ~$350, almost double that price. At the time the cost difference between the Flipsky and a true VESC was significant, and my budget was tight so I got it despite knowing some potential quality issues. (It later died on me around 600 miles but semi irrelevant)

Whats with the insane price increases… I mean now the price difference from flipsky to a true VESC is about $100 which is almost a no brainer considering the reliability and support for the project. Are vesc based controller prices increasing market wide or is this just a flipsky trend?

Alibaba still has the same ones for $180 but they are always “5 remaining” or some other small quantity that indicates it being leftover stock. Getting any from a distributor with “1000+ remaining” charges $300+ even in bulk. What gives?

A few things. @Eskdiy raised their prices on flipshit products because of the ongoing issues and silicon shortage.

Price of non silicone products are going down from flip sky. For example, 6374 motors are like $75 each now

There is a huge material cost price surge around the world.

As a vendor, I can tell you everything metal or really any material will cost 20% more than it did just earlier this year.

Aluminum in china for example is up 40% in a few months and climbing.

Retail prices may not have adjusted yet but they surely will. It’s annoying but there’s nothing we can do but pay up. 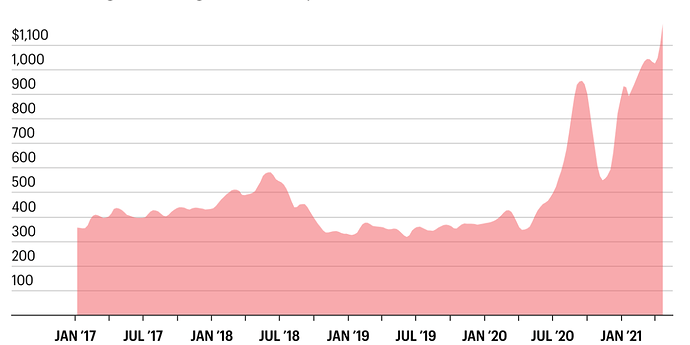 Lumber prices are up 232% and 'it could spiral out of control in the next few...

Lumber supply, which is already backlogged, simply can't catch up as demand continues to grow.

lumber is also up

Can concur. Went and got some lumber for a project the other day. Needed some plywood. The cheapest thing they had was over $50 a sheet

Yep, new houses being built in my neighborhood are 40-50,000 dollars more just in lumber costs. Newer, pre built homes are like cocaine right now. I had a dude looking at a neighbors lot ask if I was interested in selling my house and offered me almost double what I payed for it

In general, expect everything to go up in price for forever. Economics 101.

expect everything to go up

Real estate is a weird one. Increase in lumber cost + huge asset inflation due to COVID are pricing them at insane rates. Inflation already has happened quite badly in the stock market, it may never effect groceries like we’ve typically seen though in countries like Venuzuela, but these goods shortages may make it feel like that soon (They’ve run out of boba!)

They’ve run out of boba!

My wallet would be ok with this. I’m a sucker for those delicious pearls.

This is an astute point. Essentially any low risk yielding assets are getting hammered with institutional capital currently. Credit supply is loose and asset supply is low. It’s a perfect storm for residential property prices to be pushed up hard, especially in the UK with the stamp duty holiday, absolute joke of a tax break

My house was estimated at 220k right before covid hit. It’s currently estimated at 336k. Things are going bananas in the suburbs. Haven’t been following the downtown markets at all. Will be interesting to see the trends in a few years.

The increase in costs is very concerning. Most people that ESK8 do not have lots of money. Expect to see 20% increase in ESK8 products in the near future?

This will be the ultimate currency in the end

100%. Electronics shortages are also going to play havoc with things like ESC supply I think which will drive prices upwards.

It was in the news recently that Mini have stopped production of cars in Oxford UK because of chip shortages. Seems it isn’t going to go away either so things might get a bit weird for the forseeable

lumber is also up a significant amount

Being in the trades this hits close to home. Lumber is stupid priced right now. I heard 8 million pulled out of new home builds.
Supply is low cause of covid and demand is high because many want to build/remodel.
I expect to see a slowdown soon due to lumber pricing, except in the $5mil+ range will keep chugging along cause an extra $200k in lumber ain’t no thing to that class.

My question is : is this sudden increase of prices on metal is solely due to covid and will lower soon enough, or it might just stay up ?

Most people that ESK8 do not have lots of money

I’m gonna have to ask for your sources on that little factoid.

Not many broke ass mcdonald’s employees are affording a $2k custom bespoke build when you can buy a $900 china build that’s halfway decent, if they’re even in this hobby at all.

This entire community is the epitome of disposable income lol