Edit – I took a different direction from the initial plan below, and my first completed DIY board is named Toothless. Rides like a dream. Flexy, ultra low, and uncomfortable amounts of power. 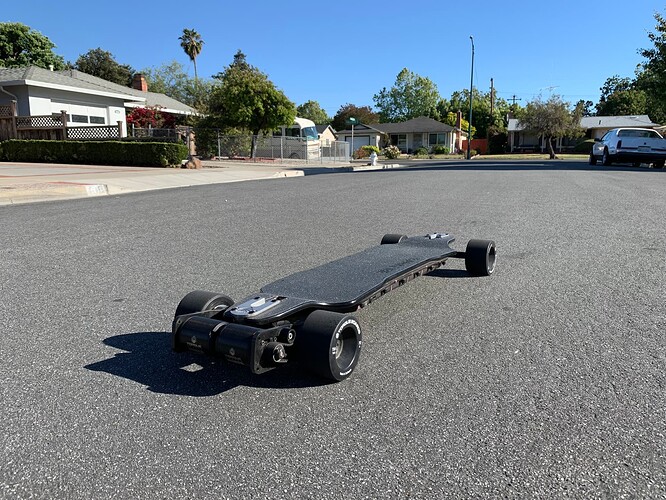 I’ve been planning this build for a while because I want a board that is flexible, close to the ground, and ultraboard status with pneumies. I’ll be using paris plates (43 rear / 50 front) with BN220s - because fuck double kingpin trucks. 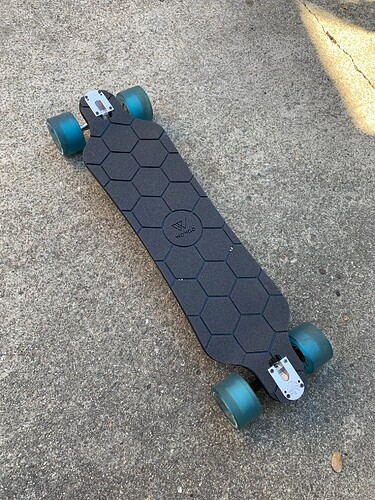 I got the deck the other day and slapped some 180mm trucks on it to test it out. With tb110s the wheelbite is a problem. I’m hoping the BN220 hangers I have on the way will take care of that. I also picked up torqueboards offroad wheels, because they’re on sale for $130 right now. After seeing the wheelbite with 110s though, I’m not sure I’ll be able to run pneumies even with the wider trucks. The DKPs typically used on these boards do quite a lot to extend the wheel base. 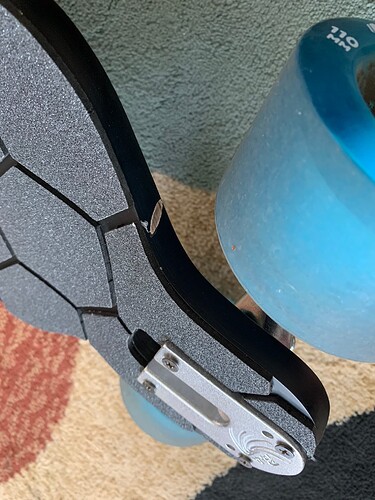 Honestly the deck isn’t as flexible as I thought it was going to be, but that just means it will be more stable at speed, so I guess I’m ok with it. If a LY Evo is 0 flex, and a loaded vanguard is 10 flex, the wowgo is probably a 3 or 4. I weigh 160 lbs, and in order to make the deck flex a good amount I have to literally jump on it. I was hoping it would be more like a 5 or 6 in terms of flex. If Backfire ever starts selling the x3/hammer deck, I might have to pick one up.


Wowgo sells the deck with this beautiful thick battery gasket already applied. I’ll be getting an AT2 enclosure from a guy I found in the wowgo facebook group who has a broken battery that he got replaced under warranty. The battery will be 10s4p or 10s5p 18650s, cause that’s what fits in the enclosure. If there’s space for 21700s, I’ll use those. 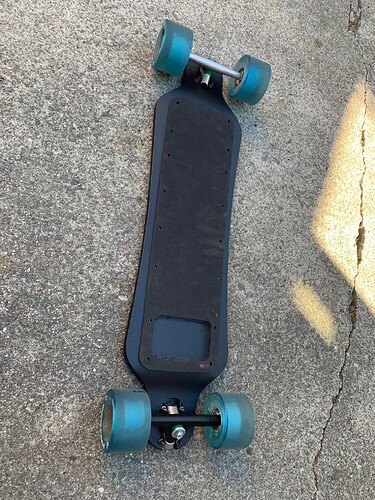 So close to ultraboard status with TB110s 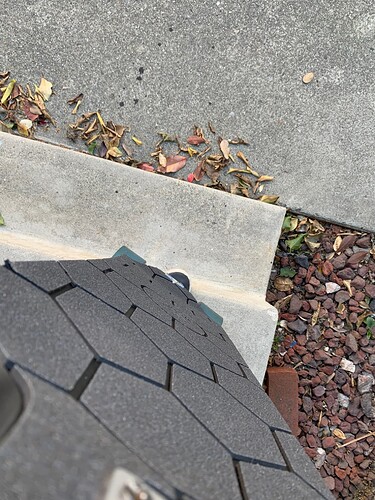 There’s a lot of clearance with the TB110s. I’m hoping that when I get the enclosure on there, I’ll have space to run 85mm cags. I love those soft little blue wheels. 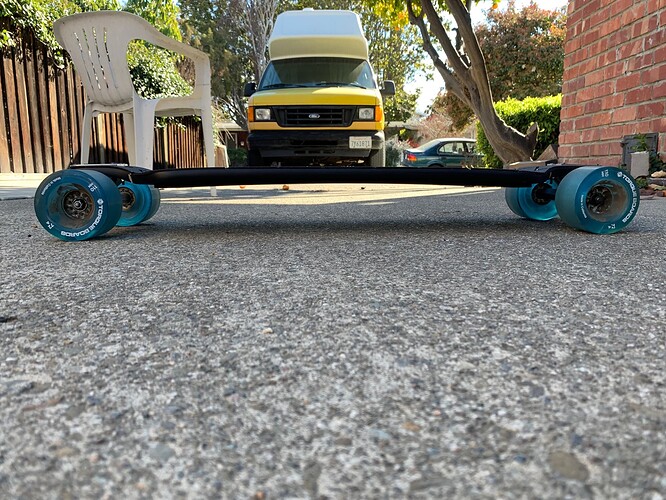 I basically wanted a flexible hummie deck. I’ll be slapping dual belt drive TB6380s on this because they are sexy beasts. It’s dubbed the board Turtle for obvious reasons, but also I think it would be dope to ride a giant turtle.

This sounds nice! My only qualm with the hummie was how rock solid it was.

Whatcha doing with the original trucks?

Thanks Zach. I only purchased the deck from wowgo, so I don’t have the DKP trucks.

A few parts rolling in. 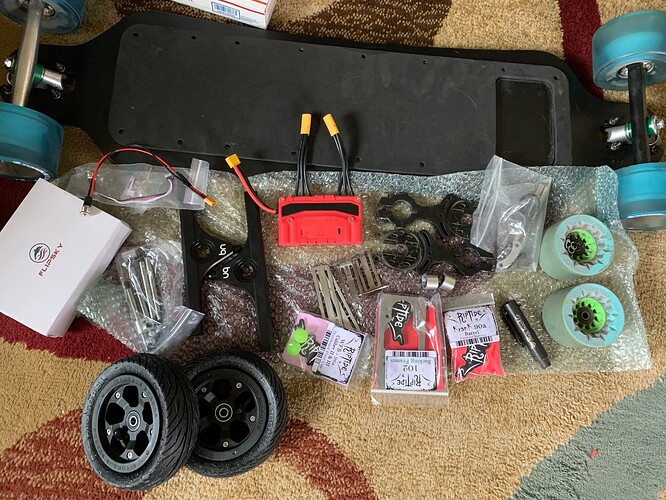 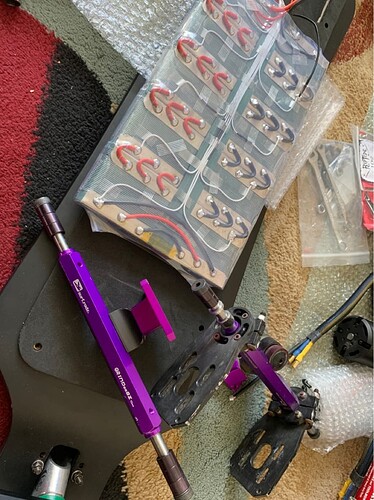 The surfrodz TKPs extend the effective wheelbase around 1" total, compared to the paris v2 mounts. Wheel bite with thane was taken care of by the BN220s but not sure about pneumies. The SR TKPs are going to be mounted drop through. I’m going for ultra low low. 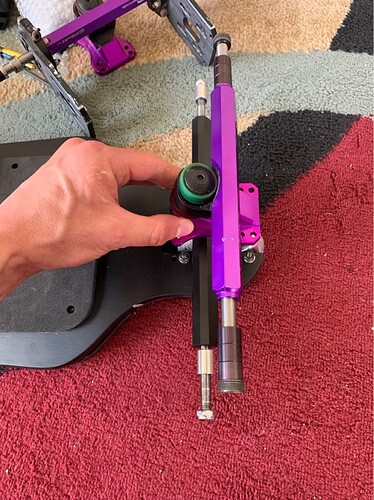 TKPs are also significantly lower ride height than 50 degree base plate rkps. Gonna be ordering some BN axles for them. 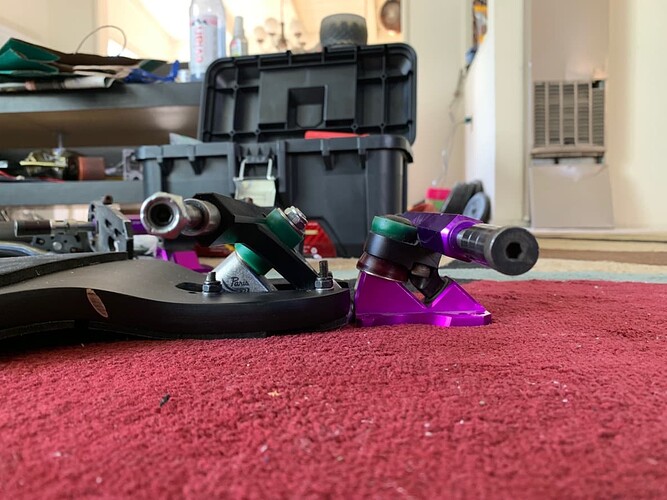 Look at that fit with TB6380s. It’s goddamn beautiful. 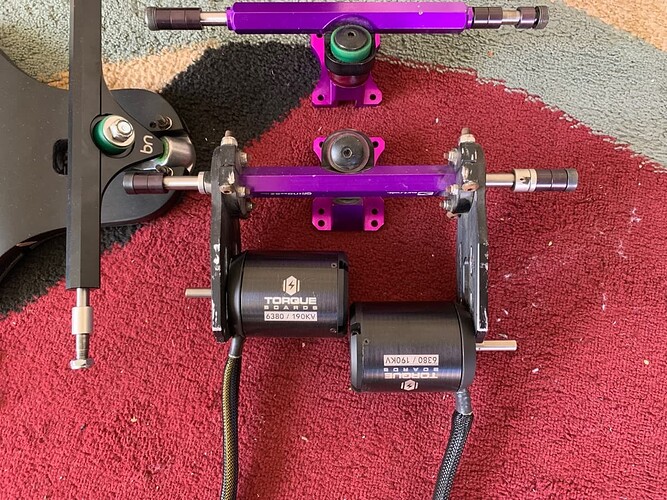 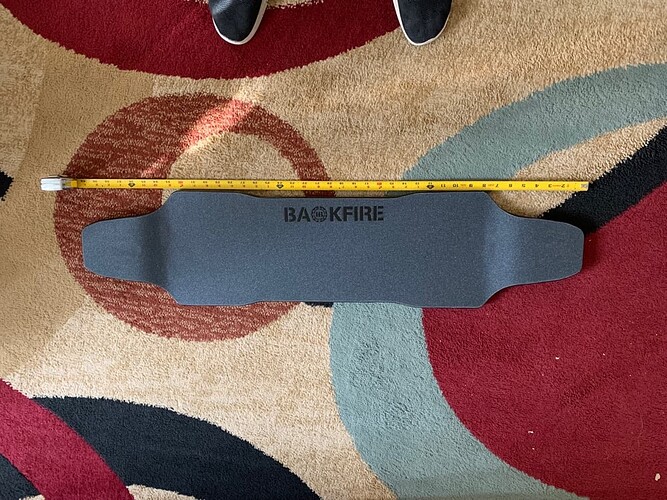 Some quality legacy gear here. This will be fun to follow.

I need your help. I have two decks. The backfire is super flexy and fun. The wowgo is pretty stiff in comparison. The backfire deck is slightly longer but the wheelbase is slightly smaller, meaning motor interference with the deck will be a challenge.

I’m thinking the surfrodz mounted drop through on thane might be too low, so I’m leaning toward this:

What would you do? 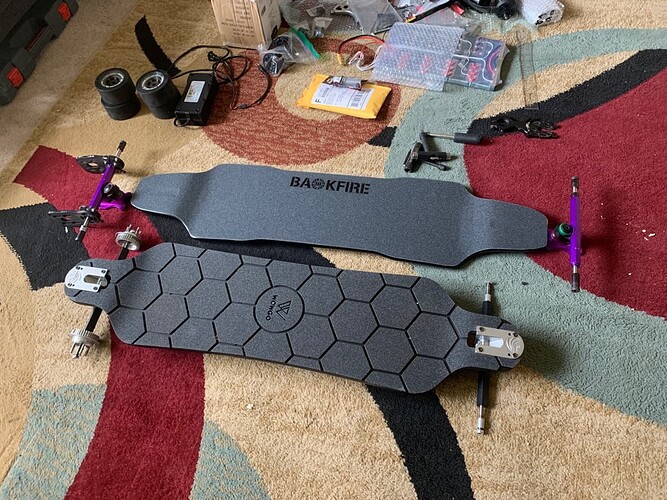 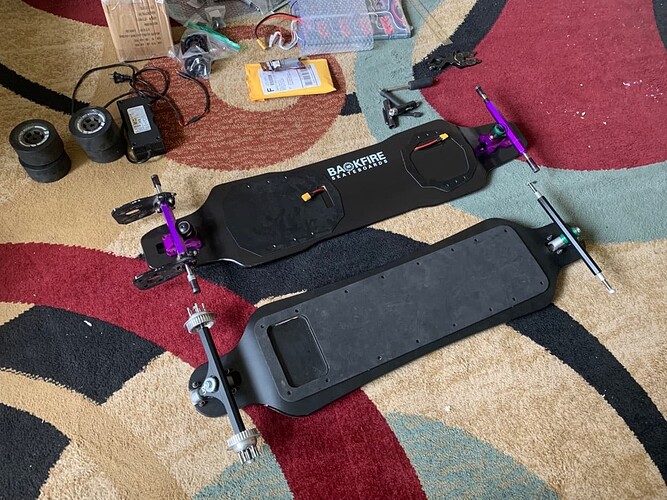 This sounds nice! My only qualm with the hummie was how rock solid it was.

The surf rodz are TKP, so the motors mount reverse. Does that make the motor hitting the deck problem better or worse on the backfire? If it’s worse (looks like they hit the tail), then I say they definitely belong on the stiff wowgo. A flexy deck can temporarily increase truck angles, which probably isn’t what you want with super turney tkp trucks

Also, on the backfire you can drill new holes to extend the wheelbase if you want.

I would put the pneumatic wheels on the drop-through deck for that ultraboard look.

I’m leaning toward this:

Yeah they’re actually both drop through - the backfire just comes with grip tape not cut out.

The extra deck on the backfire is really annoying me. I will probably have to chop some of it off to make room for motors to clear even if I drill more mount holes.

Something is telling me to put the tkps on the backfire and worry about the rest later. They look too damn good together

Update - extended the wheelbase on the backfire by 1.5” by drilling new truck holes.

Also sadly discovered that this is not a verified ultraboard with 110mm wheels. Honestly doesn’t matter though because it rides better than anything I have ever felt. The flex is perfect. Will stiffen up a bit once I mount the Eboosted enclosure. 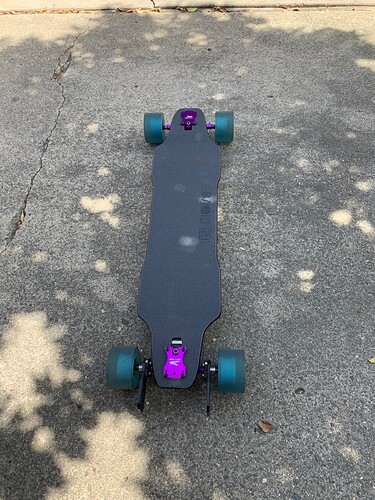 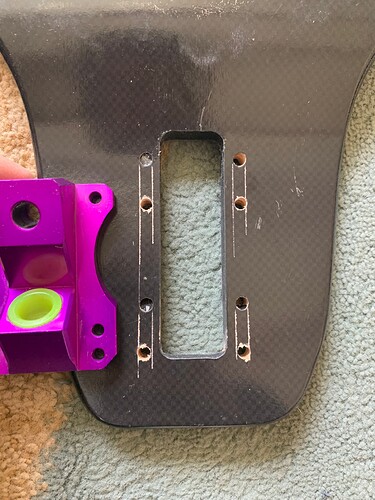 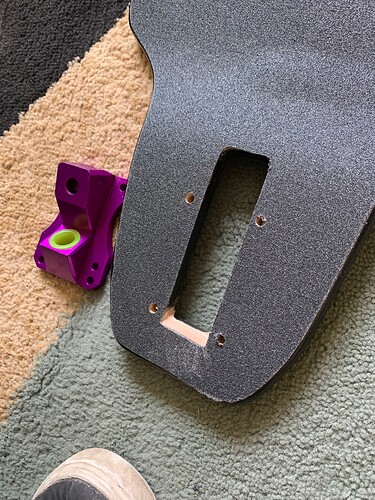 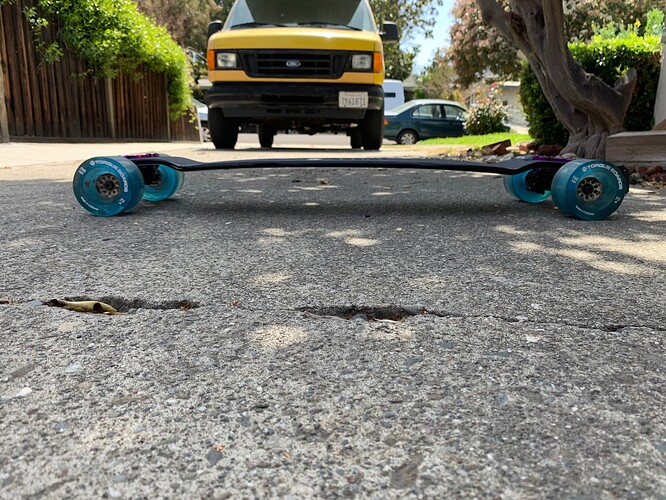 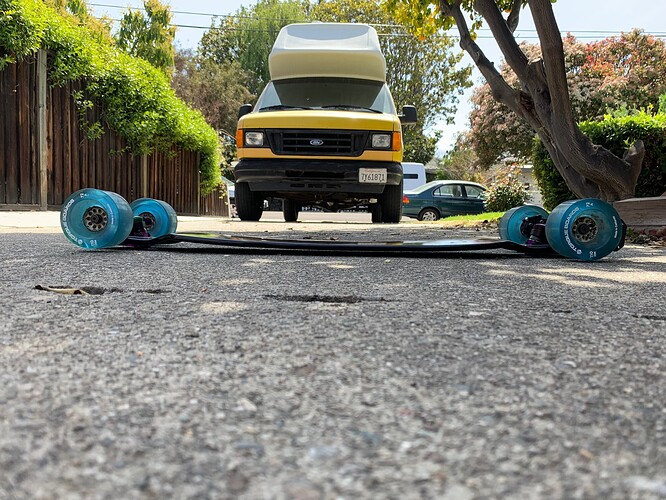 Fuck - this hobby is burning a hole in my pocket. Parts are brand new / unmounted. Hoping that boardnamics will let me pay for shipping and send it back for a refund. at least that way I’m only losing $20 on shipping.

Also - they’re freaking gorgeous - I’m sad I can’t use them. 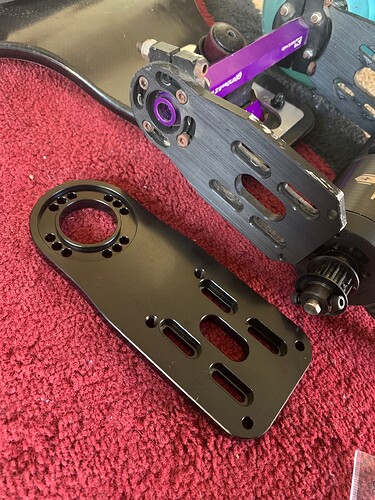 @Kai what trucks are you running?

Bn’s mostly. I wouldn’t ride it without like, a steel enclosure, but my math says on my board with 15°tails, with no risers, and adjustable baseplates I’d be good to go.

…and if my maths off I have some brackets lying around.

I believe what you wanted to say is that the XL boardnamics mounts have a wider clamp bolting pattern than the BN surf rodz clamps do. Right?

Also – wtf is up with the lack of holes in that mount? Why restrict it to only those angles?

Please show me the thane ultraboard. I need to believe it’s possible. Please

Eboosted says their evolve gt enclosure is flexible to accommodate the flex of a bamboo deck - but honestly this thing has zero useful flex. The fiberglass will twist, but the enclosure geometry prevents any real flex, the way a board typically moves when you ride it. Not surprising but I am disappointed. There’s no way this thing is flexible enough for the super flex backfire deck.

I’m coming up with mcgyver solutions that involve chopping this thing into 6 segmented pieces, held together by rubber strips. Any ideas? 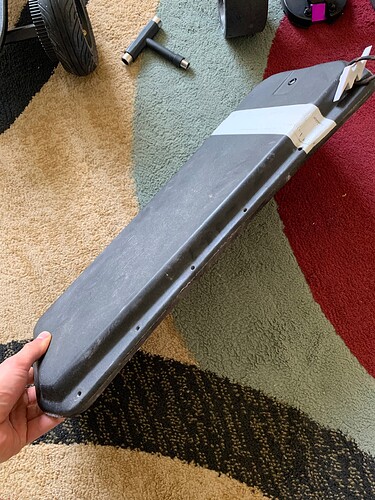