As some may know, electric skateboards and electric scooters are illegal in the Netherlands. You risk a 410 euro fine, and police will impound and destroy your vehicle.

We have recently discovered that impounded vehicles are actually not destroyed, as they show up on Auctioning websites where the government themselves are selling them for cheap. Even though that same government takes them away from you as they are illegal. Now one of our Dutch ESK8ers is bidding to buy his own board back from that auction, what a country.

We have notified national news agency’s about this, and a few hours ago they all started publishing, it’s becoming a big scandel.

Don’t forget to join our demonstration in Amsterdam on april 18th, link.

E-steps prohibited on the road, but the government auctions them (and sometimes without warning about legal status)

E-steps and e-boards seized by the police have in some cases been put up for sale by the government without the explicit warning that the vehicles are prohibited on public roads.

It also happened with 21-year-old Jilan Winter. He drove his e-longboard in November on a cycle path in Groningen. “Then an undercover car drove over the grass to stop me,” he says on the phone.

He had to hand in his board immediately, because that is not allowed on the road. Jilan knew that he was in violation, but does not think that he has caused dangerous situations. In his own words, it was the first time he was arrested.

According to the 21-year-old, the agent said his e-board was likely to be destroyed. “I was very angry and I sincerely shed a tear. I worked really hard for that board and worked on it for hours every time it was broken.”

Two weeks later he received a text from skate friends: “Is this not your longboard?” The many repairs to the vehicle on the auction ad left Jilan in no doubt. Now Jilan is trying to buy his e-board back. “I have placed a bid of 60 euros and have automatically turned over bidding,” he says. 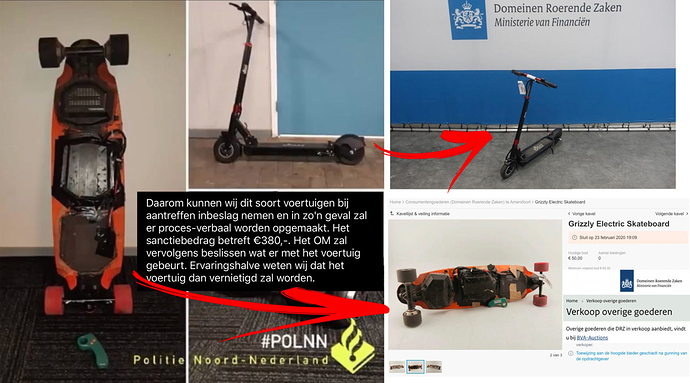 Fuckers, their defence probably “likely” to be destroyed, doesn’t mean it will. Money grabbers.

does not think that he has caused dangerous situations.

worked on it for hours every time it was broken.”

Not sure what you mean, if something breaks, doesn’t mean it caused a dangerous situation?

There is very little on an electric skateboard that if it broke would not cause a dangerous situation.

Depends what / where / when.

Thanks. I can’t think of anything dangerous about that.

There’s more, but I couldn’t be bothered, there are many failure scenarios that’s not dangerous.

Holy fuck, and i thought my country is fucked up. (Well it still is)

There is very little on an electric skateboard that if it broke would not cause a dangerous situation.

All of this shit has happened to me:

didn’t cause a street facing:

did cause a street facing:

Also that government is terrible and I hope the scandal results in changes.

This type of thing poses a serious question in my mind. If something is illegal, and it’s confiscated by the government, who turns around and sells it to random citizen, they now have some sort of papers/documentation proving it was purchased from the government. In which case does that make it legal? Since the government wouldn’t sell illegal items to it’s own citizenry would they?

This may not be super applicable to skateboards but it makes you think. I’ve seen it originally as a debate in the automotive world thanks to illegal cars seized at import getting sold off at government auctions.

The government ads include “only for use on private property” or something like that, pointing out it’s illegal on public roads, etc…

Unethical as fuck though this is.

Not only that, they know who they sold it to incase they want to confiscate it for more money.