This is a bit overkill, but I figured I’d share how I put this together tonight. There seems to be interest in soldering info here.

This is for connecting two Turnigy 60-120C 3S lipos in parallel for a spot welder and other projects. The bursts are short, however I was concerned about the combination of the max amp potential and just the general heat accumulation. In addition, a failure in that connection could cause a permanent short of both batteries - likely being used in an indoor environment. Decided to DIY this and make sure it was strong. I got to soldering a set and decided to reinforce this to make sure its able to perform at its max, especially since I may be pushing those limits

I’ve seen a few horror pictures of XT60 and XT90 parallel assemblies online - especially coming from china. I’m not an electrical engineer, but I assume there are some eyebrows raised for complete solder bridging for these extra high amperage applications. Regardless, some of the ones online have been reported to have poor cold soldering and thin bridges, resulting in failure. 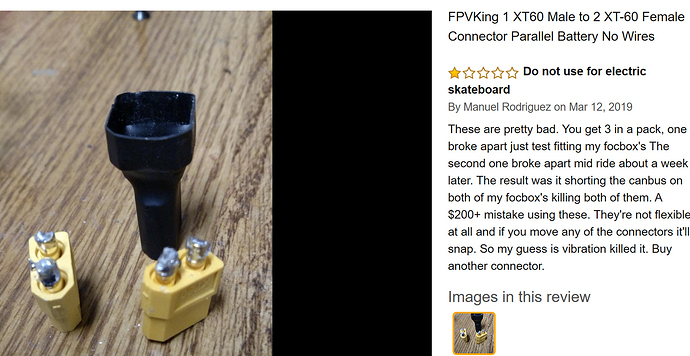 I made these changes to the technique for a few reasons. First, rather than fill the barrels with gobs of solder (and heat, these are nylon connectors with a melt temp around 120*C), I dropped some chunks of 12awg wire into them that I pulled from the trash can. Next, as I do with all large diameter joints, I decided to add a mechanical connection to the soldered one. High amp wires on my board all get the same treatment when I’m making Y connections mid stream. This simply means that after twisting the wires together, I twist and tightly wrap the connection with some solid 20-28g copper wire. That way if some how the solder were to soften at high temps, the physical connection will hold. I was taught this long ago and I recommend everyone consider it for butt connections and Y intersects for high amp applications, especially on large diameter wire. Wrapping these with some 28g solid copper wire I had made the connection very strong and unmovable. The soldered only connection could be manipulated some with moderate pressure. Albeit difficult, but repeated small movements could theoretically compromise the connections. This also makes it much much easier to make thick wire connections in general

Alright, lets build the connector:
*Disclosure, I am in no means an expert in this matter nor do I have official training in these procedures. Like most of you, I am a hobbyist and enthusiast of many things and esk8 is just the next step of that. *

FIRST STEP - BUY GENUINE CONNECTORS The connector brand you want is Amass (any gurus can chime in, I believe they developed it?) This is important to make sure the connector has proper 5mm bullet connections and high temperature nylon housing. These connectors are rated to a max of 90A continuous. There are videos of them being bench tested to 240amp and the solder and wire failed before the connector. This is a robust connector that would handle this application and 90% of esk8 just fine.
Please note: ratings for connectors are under ideal conditions. If you are running 90 amps through an xt90 continuously in an enclosed environment with no ventilation, you can expect it to fail. If you are not running genuine connectors, don’t expect them to meet the data sheet.

Connector orientation: This has a practical safety intention. It’s also just good practice and a good way to avoid making mistakes where you wind up with a male male or something when you go to plug in.

Many people make a mistake here. XT connectors and the like are referred to by the orientation of the copper connector, not the housing. This is confusing because the male connector is in the female housing. 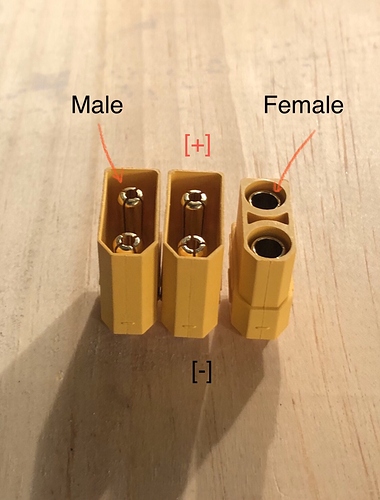 First, I wrapped each male connector in a small amount of heat shrink to act as a spacer between them. Then I aligned them and heat shrunk them together. The bits of black on the connector were from using a bic lighter instead of a heat gun. They will come off when we clean later. Its also the time to align the pins if they are not. The cups on the back of each pin that you solder the wire to can be repositioned by simply grabbing them with pliers and rotating. Orient the cups so they are all facing their respective polarity on each side of the connector. 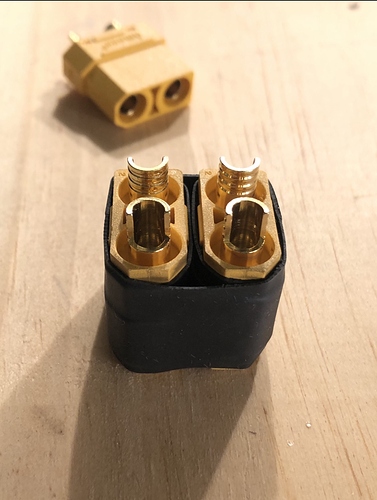 Next, I soldered in some 12 awg wire and cut off what extended past the cup with side cutters. I kept the soldering light so as not to add excess bulk before wrapping the solid copper wire. Next, the female connector was put in place and tacked to the adjacent cups. I then used a small bit of solder to tack the solid wire and I wrapped it 3 times snugly. I tacked a small amount of solder to the solid wire and the cup beneath it on each side. Now that it was lightly soldered to all 6 points and the solid wire, I straightened the connector and made sure it was aligned. Finally, I filled each of the cups with solder and bridged the connections. make sure to do this now while you can heat each cup individually.
This photo is just before filling the cups and bridging these completely.
*Two things, if you spotted it, there are actually plugs plugged into each of the ones I’m currently working on. I will sometimes plug in a spare connector to help cool a barrel quickly. *
Second, the soldering in this photo is very light touches to get something to stay in lace. These joints are cold and massively inadequate for final use. 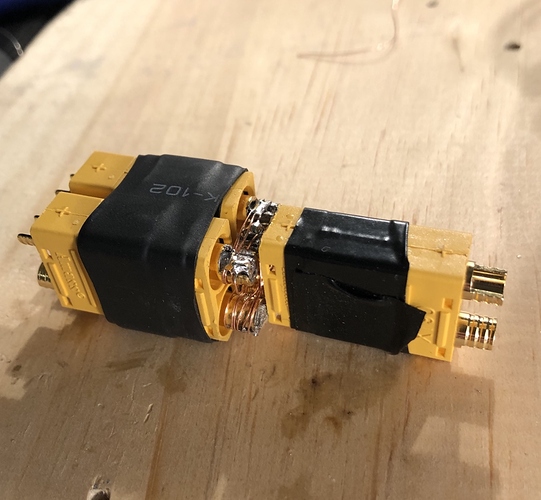 Now that everything is aligned, I finished with a few more wraps. Note, think about failures – finish a wrap on the outside, never the area where if the loose end came free, it would contact the other terminal. When wrapping like this, its easy to sneak under a prior strand to lock the end of the piece in place 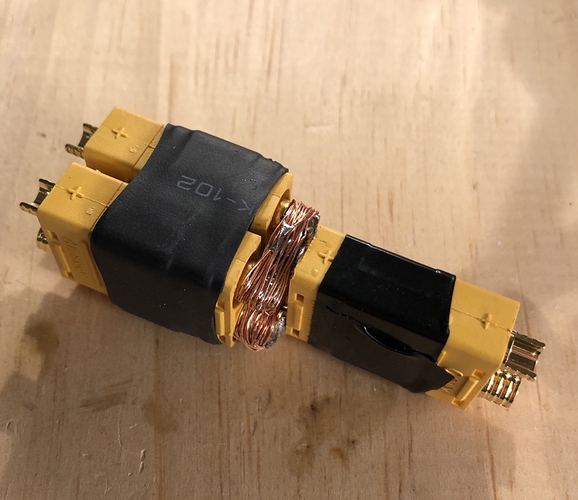 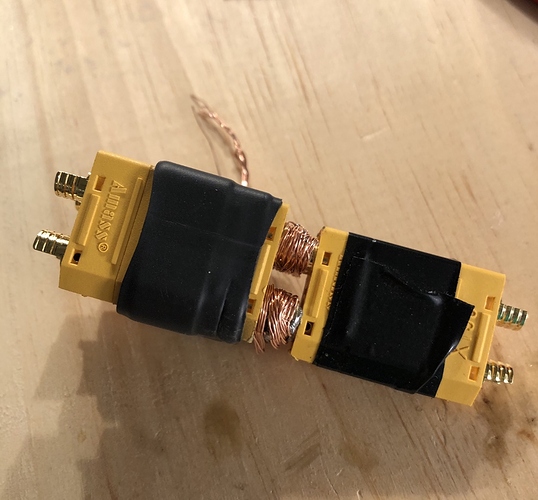 Time to finish your soldering. There’s no reason to have a 1/4" high glob here, we have built an adequate material layer for conduction and mechanical integrity. We don’t have to go overboard with excess solder. Make sure you have good solder dispersion on the wires between the poles and all of the strands are secure. Double check youre not missing any ends or snags that are bridging the polarity before finishing. Everything should be soldered secure in its location.
The discoloration and graininess you see on the solder is just excess flux to be cleaned off. 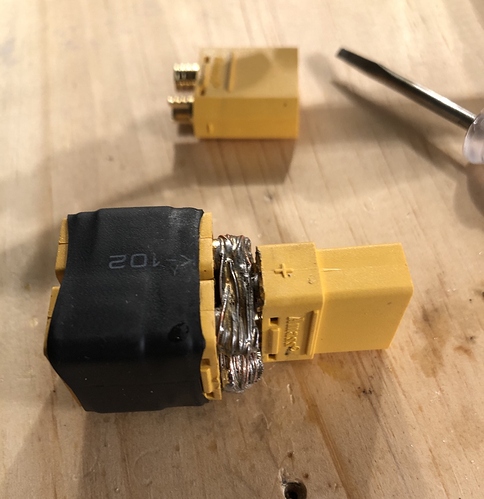 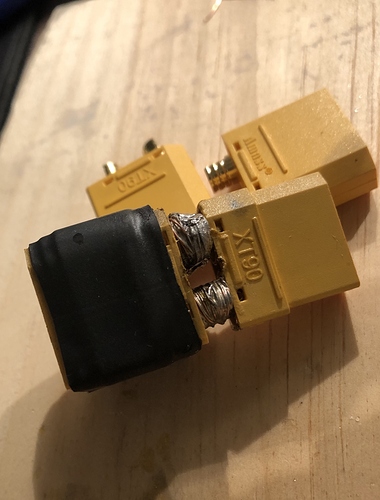 Wipe the connections down with alcohol to remove leftover flux (it should not be left on connections). Once you clean them, apply your outer layer or two of heatsink and you’re done. 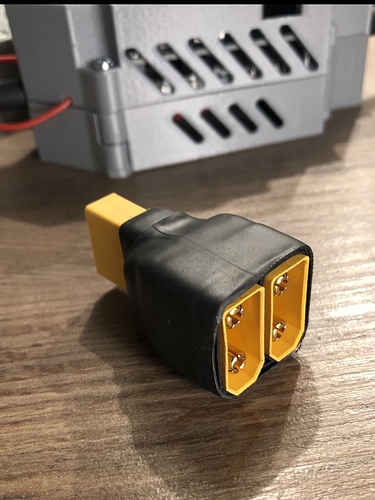 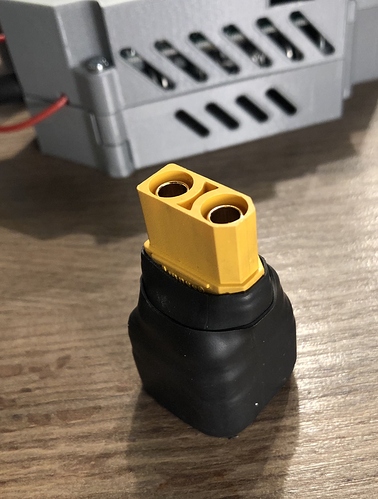 Enjoy your sturdy connector that should last you a while and endure some abuse.

Average price online $15 (no guarantee for genuine brand)
Cost to build this, <$3 and 30 mins

This is absolutely the kind of quality tutorial we need here. Thanks for sharing this!

appreciate it! Happy to give back a little

Some people like to add conformal as a finishing step. Do you ever feel like that is necessary or would you consider it overkill?

I did not use any here, partially because I don’t have any on hand. However, I think its good practice to use that if you can especially considering the intended use of these connectors. Given the applications that ESCs are designed for, I’m kind of surprised its not standard for most e-vehicle electronics. If I had some liquid etape I might’ve used that under the heat shrink between the poles, but more advanced conformal would have worked fine too.

Thank you! I was going to order a connector but now I will do my own.

On the next, I’m going to use a Dremel to slot the posts and use a solid copper bar to connect the two