So back in April i got a set of the new Cloudwheel 165R Rovers and tested them out for science. I believe these were the first public batch. Ibwanted to post here to get some feedback on my experiencesand results before i post a video on youtube.

TL;DR version at the bottom

So just a small over view, i put these wheels on my DIY build that uses the flipsky 15.22 inch dkp trucks that has 10mm axles (none step down). The bearings these 165R’s use are 22mm OD bearings. So i used the Metroboard street bearings which were 22mm OD and 10mm ID. I wanted to see how they compared to pneumatic ATs as far as shock absorption, range, grip, the feel and control, and performance at speeds. Also other things i wanted to see was how it did in different temperature conditions. So my experiences are…

-Shock absorbtion
The shock absorption on these wheels are very good especially going over sidewalk cracks. Not as great as pneumatics (but a touch behind them and really good), way better than the original airless honeycomb wheels, and definitelya level above 120mm cloudwheels. The shock is noticeably dampened and felt a lot better on the joints.

-The grip
The first 10 miles were slick as shit, but after carving a bunch during those 10 miles the gripping settled in better. By 125 miles i was taking turns more aggressively and carving with 50%-75% of my weight thrown into it compared to what i usually do with pneumatics. However they still were less grippy as compared to the pneumatics, but Iwonder did advertise these as a balance between gripping and sliding. Meaning you can slide easier on these wheels than others. Either way, these do grip way better than the airless honeycomb wheels.

-The feel and control
This is hard to explain, but the feel and responsiveness of these wheels definitely gave me the old school skateboard feeling you get with thanes without the shocks from the cracks and the random unexpected loss of traction. Any slight changes in direction were immediate. If i put a little extra weight to the heel or toe side, the wheels would take me that way instantly, and almost jerk me in thay direction, where pneumatics on the same board and trucks would be less jerky and smoother. The control loke i said was just instant and responsive. Also with how well it absorbed shock, there were times i totally forgot these were airless wheels, just damn comfortable.

-Performance at speeds
So my diy wasn’t built for speed. The highest i topped out on these wheels was around 28 mph. The box these wheels came in states that it doesnt recommend you go over 40km/h or 24.8mph on these wheels. Like i said before, definitely the old school skateboard feel with thanes. Honestly, i feel a little sketched out with these wheels at speeds, especially with how responsive they are. Imho definitely not a set of wheels you wanna do speed runs in. At least not on dkp trucks. I was most comfortable at most 20-24mph on these.

-Wearing
It wasn’t till i got to 125 miles to where the grip starting gripping better that i decided to rotate my tires. I managed to just wear out the dotted areas of the wheel and probably wore out about 1mm of the rear wheels. They wore out fairly evenly. I’m sure the average rider would wear them out slower since i was actually trying to wear them out as quickly as i could. Also i carve a lot and ride fairly aggressively. I feel they last fairly well. But my question here is will they offer replacement tires for lower cost than $229 for a full set of wheels and pulleys for a lower cost that would be cheaper than replacing pneumatic AT tires every 500 or so miles? I have yet to see an option for this, probably bc its too soon to tell.

-Temperature of the ride
So I rode these wheels in temps as low as 60°F and as high as 95°F. I made specific note of this because I’ve seen many time the airless wheels, that were glued onto the hub would melt off with the higher temps. I wanted to see the effects of the temperature on these wheels. My main concern was where the antiskid rubber attached to the polyurethane. I’m not sure how it is attach but i can assume its glued on. So with the air temperature upwards to 95°F, its proper to assume that the temperature of the pavement is greater than that, and rolling over it for 20 or so miles carving and turning, they held up well. I saw no signs of the antiskid rubber peeling or coming off the wheel. And unexpectedly, i learned that the wheels are actually more comfortable to ride in the heat. The wheel did become a little softer and so i assumed that helped it out. The box did say that they dont recommend you ride it above 115°F.

So those were the positive experiences, let me go over a few negatives, and there were actually just one.

My one only issue with these wheels was discovered when i rotated my tires at 125 miles. I observed my Metroboard rear outer bearing were starting to collapse significantly. I had a discussion with a friend. He felt that with such a large difference in a larger will and a smaller 22mm bearing, the forces on the smaller bearing from aggressive carving and cornering could be stressing out the bearings. He personally had issues with something similar when he had a set of 22mm bearing blow out on him with larger AT wheels. The collapsing bearings were more obvious on both rear trucks and slightly apparent on the front.

I did have spacers inside the wheel, but one issue i encountered was that the wheel pulley has these cavities on the outer side of them where it would look like another bearing would fit in. But a 22mm bearing is too smaller while a 28 mm bearing is too damn big. Its worth mentioning that the flipsky trucks i use are not step down axles. Its 10mm through out on the axle. And so i learned that the bearings from the side of the wheel that presses against the wheel pulley would slip into this cavity after a ride. I emailed Iwonder about the purpose of this cavity. Idk if its bc of a language barrier or what, but they just couldnt answer my question. Or they also had no idea why they put it there.

I addressed this issues by adding an extra bearing to act as a spacer. However the bearing was not wide enough to keep it from slipping bc the bearing from the wheel would slip out by about 4mm. I got a lil lazy and didnt feel like dealing with it and left it as is.

I emailed Iwonder about this and told them what i learned. They recommend i use their bearings which are the 22mm OD and 8mm ID bearings. I dont have trucks with 8mm axles that can use these wheels. And so i concludee my tests at 125 miles.

So could have the damaged bearings be related to the design or me not properly addressing this? Could be both since the front bearings showed signs of damage as well. Not as significant as the rear but its still there. Tell me your thoughts.

165R’S are just a step down from pneumatic ATs as far as grip, comfort, and performance. Has 15-17% increase in range over the pneumatics. Small issues with the design causing my 22mm bearings to collapse. I emailed iwonder and recommend they use 28mm bearings for 10mm axle trucks. They told me the 22mm OD and 8mm ID bearings are best for these. At the end, i really like the concept of these wheels. Probably the best airless AT alternative available. I just hope they use 28mm bearings in the future. 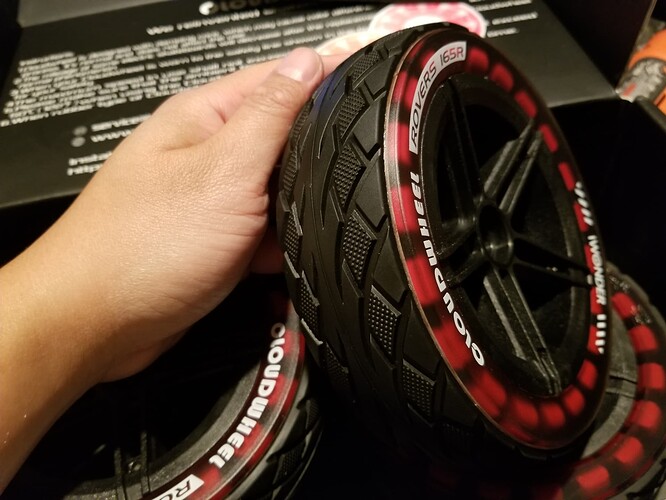 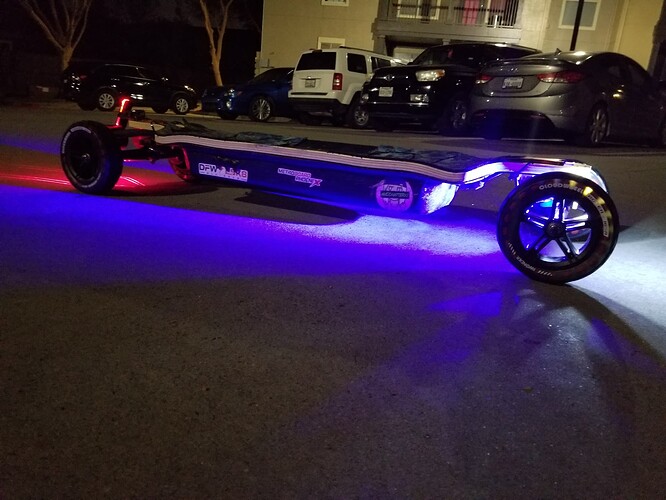 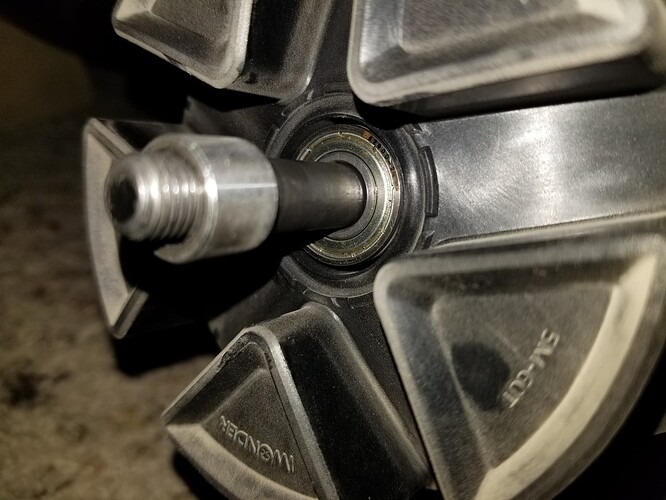 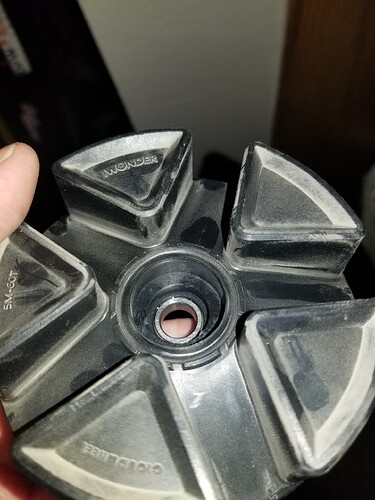 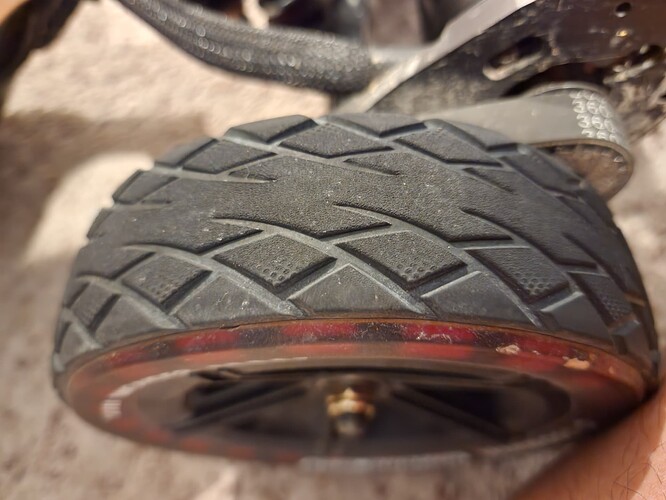 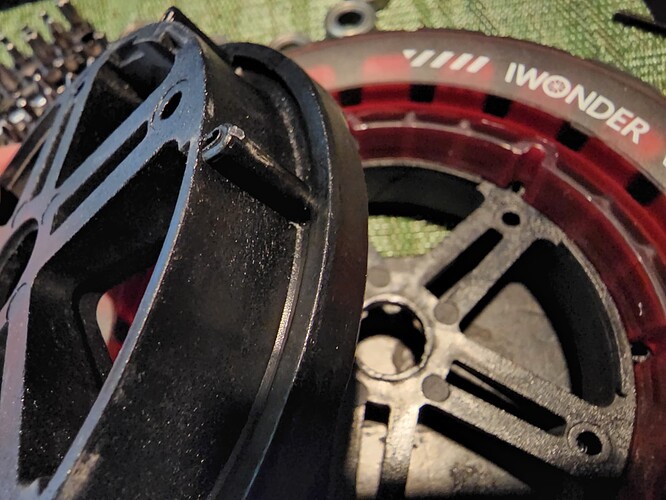 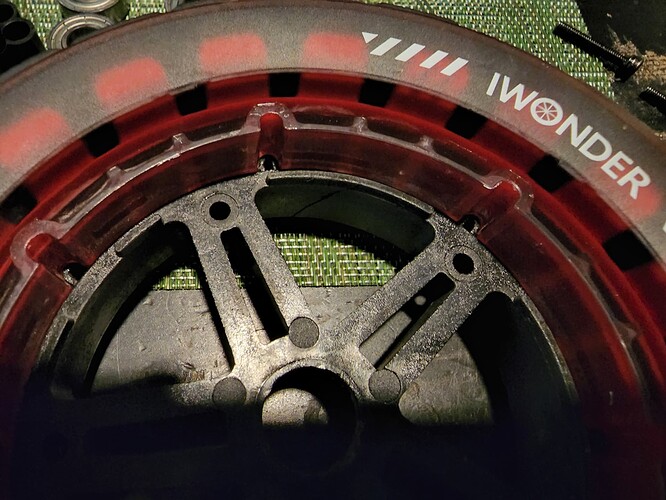 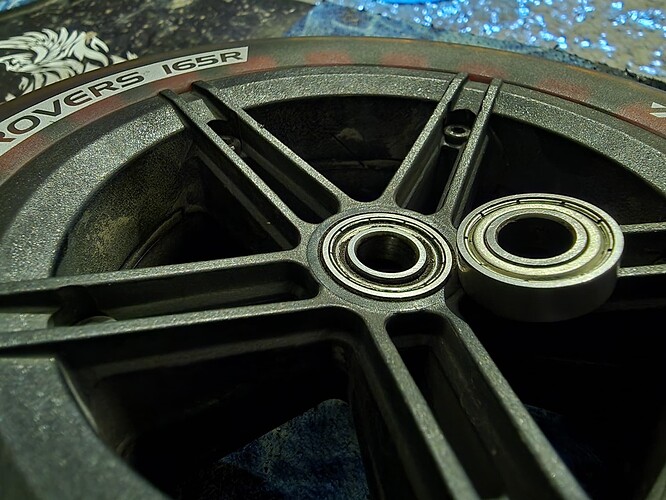 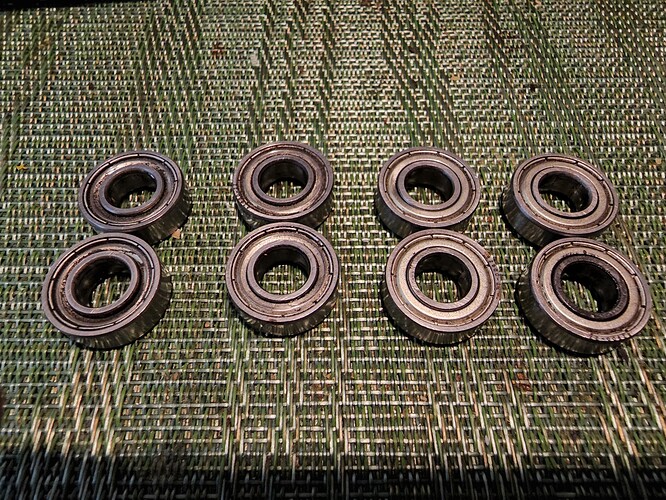 Great review, thanks for the writeup!

Thanks! It was a lot of info

Nice review, thanks.
What’s the weight of these wheels?
You are right, 10mm x 22mm are the weakest bearing (balls are too small and can be sheared by axial loads)

… you compensating for something?

Hahaha maybe, 63 miles of range is awesome!!! Its actually 3x 10s5p batteries Y’ed in parallel together

Oooof… I’m not sure. I dont have a scale