Bustin Sportster -- how low did you go

Slowly piecing everything together. Just for fun, I put it together as a drop through and I have a little over 1.7inch /44mm of clearance. It looks like it’s enough. I’ll post more pics as I go. I’m still debating top mount or drop through. Is 1.7in enough for the streets of NYC?

Just as reference, this is what I’m rolling on now.

Is 1.7in enough for the streets of NYC?

Penis joke. Also, depends on how much you like getting sprayed by bin juice I suppose? 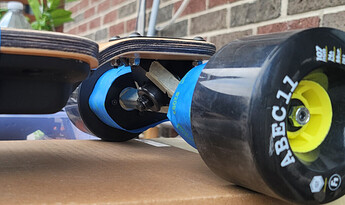 @Mikegt115 Once you do as Simeon instructed (and you should), I’m pretty sure you’re gonna have clearance issues with those gear drives in drop through mounting.

This one is as low a it gets.

Since I had a couple parts left I decided to start a fun project. The goal was to build a sexy carver with decent power and range, without being too heavy. So, I ordered a deck, enclosure, some cells and we put everything together. Parts Deck: Bustin Sportster Enclosure eBoosted MK2 with seal and bolt kit red Battery: 12S4P 21700 Molicel P42A 180A 16.8 Ah Trucks: Titan 7075 Aluminium 300mm TKP hanger with 42CrMo4 steel extended axles, HeXL 6061 Aluminium 35°/45° split angle TKP BPs, Ripti…

After playing around I decided to mount it top mound and it is still my second lowest board.

If you want to have fun with your board and don’t thinking all the time about catching an edge, I would recommend 2-3" of clearance.

1.7in enough for the streets of NYC?

@jack.luis how low is ur urethane build?

I’d say 1.7 is cutting it too close and you will smack your enclosure on speed bumps and uneven terrain.

I believe your gear drives are mounted the right way (relatively to the hanger), they are almost always mounted inward (motors deckside) otherwise the motors can would hit the kingpin when turning when mounted roadside except in some cases with ultra wide hangers/small cans or non-RKP trucks.

Edit : I see you are using 6355 motors, it’s worth a try for outward mounting, watchout for the kingpin before riding it thought.

Just install both trucks the other way and you should be good. Don’t worry dude, we all make some “oopsies”.

You should mount the gear drives to the rear. Its not much work

I never hit my enclosure, it’s my motors that are low as shit

Yes, I wanted them outward. But will see how inward looks.