Hey y’all. Over the last few months I’ve been slowly acquiring all the equipment needed to start a battery building service. I have started building a few batteries for friends so I just wanted to start a thread showing off my work. As I complete batteries, I will show a step-by-step process of my builds in order to show my work. For now, I’m only posting 1 build as I have not finished my others yet due to a crazy summer semester. As I get a bit more time, I will also be building some standard shape flat packs that I will be selling on this thread in order to get some more projects under my belt.

Until I can work out all of the details and register the LLC, if anybody wants a custom battery, I will be charging $10 per cell plus an extra amount based off of the bms wanted ($30 for Daly, and $50 for LLT wired for charge). $5 per cell and the bms cost will be due up front for initial cost and the rest will be due before shipment. I will provide free shipping within the CONUS.

If you have any questions, let me know and I’d be happy to answer.

Edit: As it has come to my attention, there have been some misunderstandings coming from my explanation given here. The $10 per cell covers the cell, labor, and extra parts included. I will be getting brand new Molicel p42a from 18650 battery store for the cells. This means for a 10s4p, the cost would be $430-$450 depending on the bms. If this is still unreasonable, please just let me know and my prices will be adjusted.

Edit 2: I had a lot of things going on yesterday and I for some reason thought it would be a good idea to throw this into the mix when I don’t have the time to write everything I needed to say.

As far as liability goes, I forgot to mention that for every build that I do, pictures of each step will be sent to the buyer, and I will not move on until I am approved. This does a few things. 1.Builds a bit of trust with the buyer. 2.This allows them to see each and every part and aspect of the build in order to trust the battery, and 3. It will reduce liability of myself. There is also a waiver that needs to be signed upon shipment that basically states that “the buyer gave approval for every part of the build and is authorizing the completion and shipment of the battery. Therefore, anything done with the battery after shipment is up to the customer, and any damages that may occur from doing so is the doing of the customer. I will not be held responsible for misuse of equipment.”

I hope this clears some stuff up as well.

When I started getting into batteries, the best advice I got was not trying to “openly” sell my services until I had gotten into the double digits. As it is, I could do that now - but I still do them one by one due to time constraints.

There is so much experience that comes from doing different kinds of batteries, working with customers, making things fit into enclosures, and ensuring that you meet our “standards”

Have you taken a bunch of time to read through the battery builders thread? I appreciate the fact that you are intending to show your step by step process - but your price is absolutely sky high for someone that has a lot to prove

IF that price is the cell+labor that is more fair, but ofc that depends on the cell. As a more experienced builder, it is slightly insulting to look at a newcomer trying to ask for that much

Now, I hope you won’t get roasted like someone else (not naming any names) who tried to do just this, but I look forward to seeing your examples of work.

Coming at it from a business perspective it seems kind of funny to say you’re starting, but also you don’t really have that much time to start? Nice to offer free shipping though.

Where in the US are you located? Approx

Hey man, I wish you luck in your endeavors here as you’ve been a valuable member of the community. Setting up an LLC is a great way to protect yourself from liability, but until you have that make sure you have people signing liability waivers. Even if they’re just friends, its always worth being cautious. I sold one battery without a waiver which was dumb but the pack of course is rock solid so im not super worried. After that, I even had close friends sign waivers.

Unrelated, but as you start this business there are a lot of mistakes other members of the community have made that have a lot of educational value for anyone looking to set out on a battery adventure. cough cough

We got DBS, Skyart, Eboosted who are selling for about $7 per cell

I charge $12.50/cell for custom battery builds, and I’ve since passed my 100th battery.

Personally, I have a very small list of people whose work I would trust, and they’re all generally in the same range.

I sold one battery without a waiver which was dumb but the pack of course is rock solid so im not super worried. After that, I even had close friends sign waivers.

I’m nowhere near a pro battery builder but I feel as apprehensive as this about building anything board related even for close friends. Had a few people request putting one together but it’s such a huge safety issue if it goes wrong, can’t recommend caution and preparing for the worst enough

Also, yes, I have read through the battery builders thread 3 times over at minimum. I also have a close friend of mine who has built dozens of batteries who I have check over my work as I do them.

If $10 per cell is still too much in your opinion, let me know. It’s hard for me to gauge what services are worth for a new-comer but I will adjust accordingly.

You set your prices however you choose. It’s your business.

Money should be the least of your worries until you’re reasonably certain that you have sound enough understanding of the problem solving nature of custom work, as well as the proper tools and familiarity with those tools to accommodate a job properly.

The more jank introduced into a job, the higher the risk. And then you need to account for your own comfort level with handing off risk to another person. And the risk incurred by those who live with or around that other person.

Liability waivers are all well and good, and legal and financial protection are important. However, so is one’s own conscience. And that’s a personal set of value judgments that one has to consider when making a relatively dangerous good for another person.

I realize many companies, factories, and businesses don’t take any of that into account. But I do. And I believe it’s important for everyone to do so, whether they actually do or not.

Best of luck in your endeavor.

That seems much more reasonable, I (and presumably @ShutterShock as well) thought you meant $10/cell was for labour

This is not including the cost for the cell itself. Sellers charge the cost of the cell plus the cost of the parts & labor. That $7-8 that they charge would be $5 for me, as I am charging $10 total, cell cost included.

Okay this wasn’t clear at first, sorry for the light roast earlier

You’re all good. All that matters is that we have everything cleared up now.

However, so is one’s own conscience. And that’s a personal set of value judgments that one has to consider when making a relatively dangerous good for another person.

I realize many companies, factories, and businesses don’t take any of that into account.

The basis of capitalism is literally against moral consciences and righteousness, it has always been about money and maximizing profit for the company.

This is precisely why I had dozens of chances to introduce investors into my venture yet refused to do so, I’m too afraid of board interventions that deems my actions “does not align with the best interests of everyone on the board”

I support @Akbrock47 taking power into his own hands, at least he gets a chance at having a conscience.

I have a waiver written by my aunt (lawyer) that covers basic liability, that will be expanded upon later. I forgot to mention in the original post that all batteries built will have pictures sent to the customer throughout the process. This way they can give approval to go to the next step and approval of the job being finished. That can help with liability issues until every single detail can be ironed out.

As I think I have covered everything of worry, I think that I will show pictures of my first (documented) build. Feel free to shoot me any questions or concerns and I will respond accordingly. 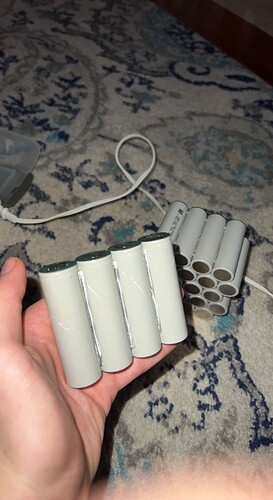 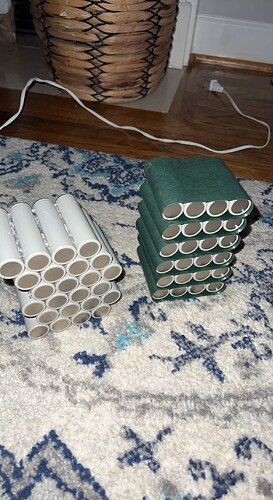 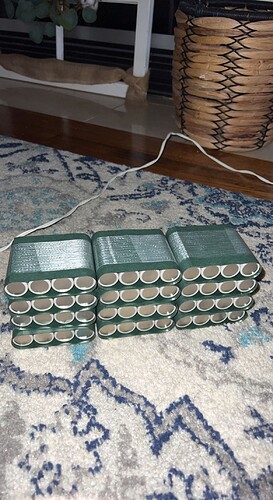 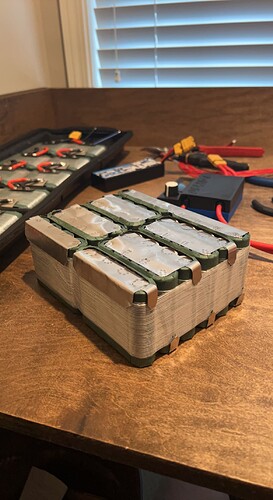 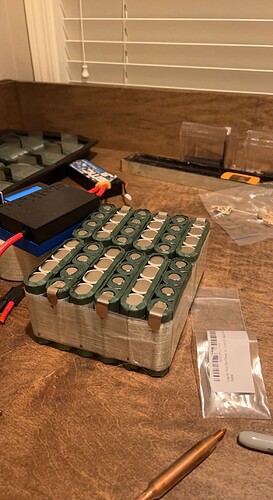 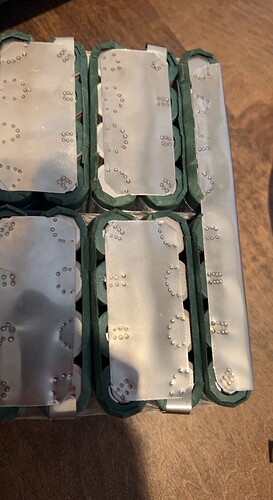 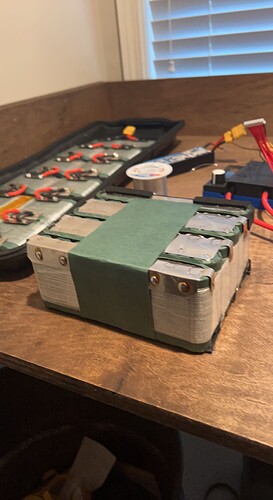 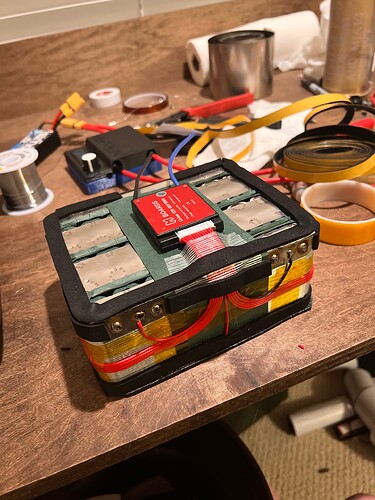 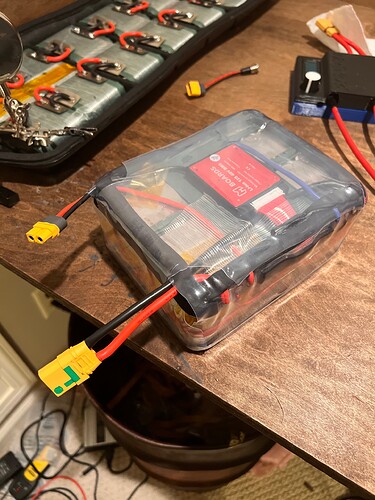 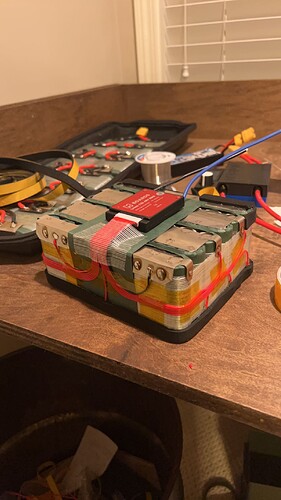 For some reason the pictures are a bit out of order. You can probably see the order things were done in, so I guess it’s not such a bad thing after all.

What’s insulating these cross-overs here? Doesn’t appear to be any fish/barley… 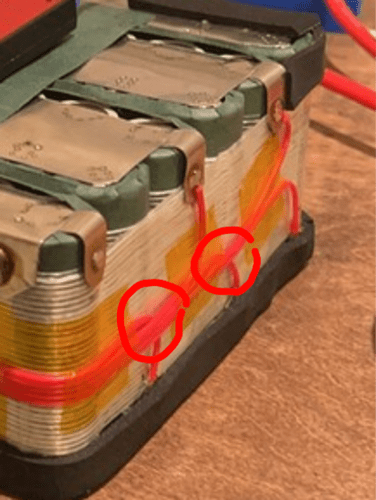