Anyone with builds using Lishen batteries?

So a long story shortish, I brought an Ecomobl ET2 and went for their 12s5p battery option, at the time they were advertising Samsung 40T batteries in their packs. Then I saw a video review where it was stated that in fact they were now using Molicel p42a’s, great no problems with that.

However roll on 2 months and When I finally received my unit. I started to notice performance issues after a few rides with regards to the range I was getting. For the fist 9 Ks the board is savage it’s torque was incredible then battery would drop of drastically and I’d be all out off battery by 16ks.

So after some back and forth emails with Ecomobl, I find out that the battery pack is made up of 4,000ma batteries from Lishen instead of the stated above Lishen LR2170LA to be exact now apparently on paper they are a match for the 40T but we are all aware paper specs aren’t really worth anything.

They agreed that something was wrong and Agreed to send the correct battery I had paid for.

So my question is have any of you built with theses before? Should I try and reuse them as the battery pack was so poorly made. I will add a few photos for you to see. I was shocked at the quality of the build especially after watching people like Lee and Pavel build their battery packs, and subsequently other battery pack builds on this forum 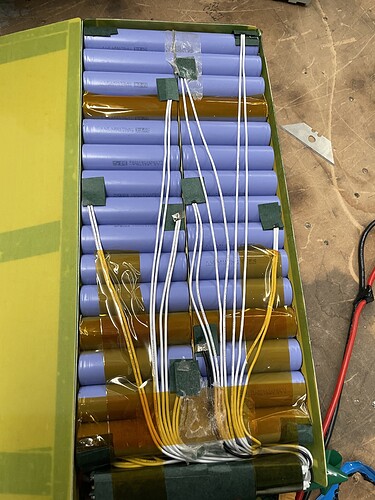 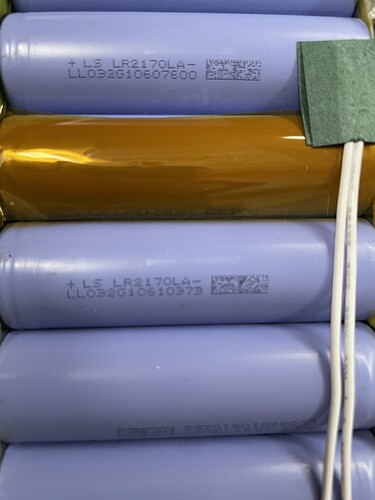 Best of luck with your question. A tip - spell check and punctuation would really help your post to be easier to understand, and to get better responses faster. (Not trying to be snarky here at all)

Thanks for the heads up I never proof read the post.

Just read it back, your completely right it was un readable to be fair. I have changed spelling and tried to correct grammar etc.

Apologies if it’s still a bit of a mess. My writing skills are not one of my strong points and I’m English so no real excuse.

If you connect a VESC to it, the in rush current to the VESCs caps will trigger the protection on the bms XD

Then you have to wait a bit for it to come back alive.

Shitty pack, thats why they use metal enclosures haha

I have bunch of lishen cells to be assembled for my scoot. They’re not similar cells as yours but the manufacturer is the same shite. 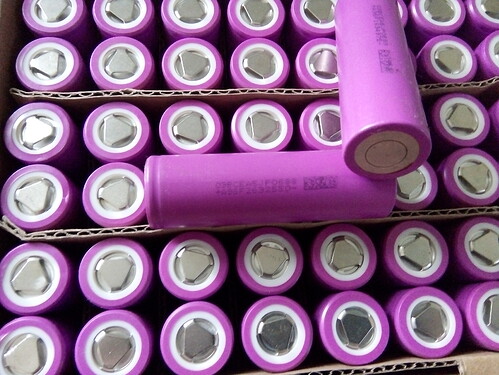 I’ve been building packs with shitty cells. Nothin resulted in fireworks so far. The rule of the thumb when using questionable cells is that you treat em as if they’re all 1C rated cells.
If you choose reuse yours, must repack em first and limit the current accordingly.

Dang this is really discouraging. I was about to buy some of the lishen 4500 mah cells for my next build, but it’s looking like molicel is the way to go.

You do know @Battery_Mooch already did a extensive testing on them right? And they are being used by a few big companies to replace the 50e

Lishen is a large, reputable manufacturer in China making a large variety of decent cells. Millions and millions are used every year by their customers.

Obviously some will be completely inadequate for esk8 use as they were designed for powerbanks, laptops, toys, and other low power applications. That doesn’t make them crappy cells. It just means you’ve chosen the wrong cells.

Dang this is really discouraging. I was about to buy some of the lishen 4500 mah cells for my next build, but it’s looking like molicel is the way to go.

Nothing in this thread has indicated that Lishen 4500mAh cells are a poor choice. As is true for any cell, as long as you build for their current rating you will be fine.

Molicel P42A’s are great power cells though with a high current rating. If that is what you are looking for then go for the Molicels. If you are running your cells at a lower power level where those Lishens can perform their best then consider buying them.

I’m possibly wrong here but I am sure I read some where that the cells in this pack also had a high discharge rate.
They were also controlling the discharge through the BMS, the esc used is a LingYi 50A power esc as they call it.

I would like to find some credible information on the cells originally put in as they are sending a new battery pack. So if it’s possible to re pack them I’d like to make use for them. If they really aren’t up to the job I will just forget about them and move on and get some new cells.

Okay thank you for the reassurance.

The 4500mah cells are rated for 13.5A discharge, so hopefully a 13s7p pack can produce 50A reliably without much voltage sag.

This is the apparent specs for the cell in question they look like decent cells on paper.

I’ve only done a little bit of googling but from some tests on flashlight forums it looks like they do actually perform well, a little better than 40Ts. Could be that your pack is defective? I really can’t see a reason why it should be that bad unless you’re super heavy, riding constantly hard uphills, and haven’t experienced another decent pack to compare it to. The last bit is only because most Li Ion packs do lose a good chunk of power lower in their discharge

I understand weight and type of riding do make a difference.

When I did a range test for ecomobl they had me do the range test in mode 2 only with a average speed of 23kph. My result was 20ks, however performance took a big hit after around 9ks.

The reason I questioned the performance in the first place is because of claimed range on their site which was for the 12s4p battery pack which stated 20 miles/ 32ks - 25 miles/ 40ks.

I know theses claims are to be taken with a grain or rock of salt. The fact is I ordered an 12s5p pack which should in theory give me an extra 20% capacity on the battery pack.

So not being able to hit or get close to their claimed ranges with a 20% bigger pack is what was my issue.

I have a couple of builds coming up and one will be for a 12s4p battery, I’m leaning to as I have also read decent reviews on the cells, that the battery pack was poorly constructed ( as can be seen from the photos above) and possibly a better built pack and better quality parts may make theses cells perform better.

“technically” it is a 20% increase but it isn’t really. You don’t actually use the entire capacity of the cells, so adding one P group I wouldn’t really expect to see more than 10-15% capacity increase

I know theses claims are to be taken with a grain or rock of salt.

Dun trust manufacturers’ specs.
Best to sample/test the cells yourself. A cheap 40$ load tester from aliexpress should be enough to make sure that your’re building a battery pack not firecrackers. 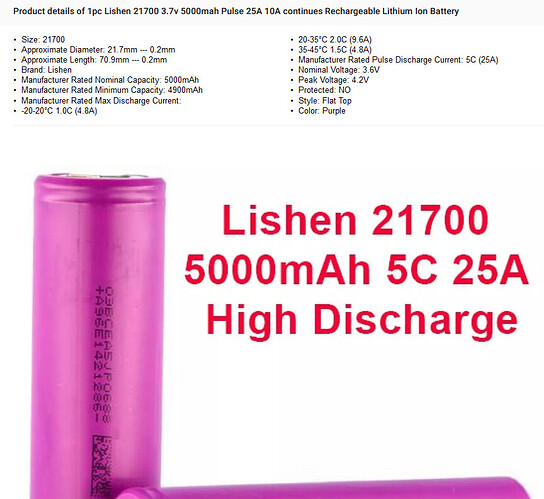 image864×794 155 KB
This is supposed to be as good as samsung 50E but it went too hot to finish 8A continous discharge test.

I understand what you are saying but no matter what the cells discharge to overall it’s still a 20% increase in total usable performance, compared to what your getting from a 4P

My ranges were in Ks not miles so it makes things even worse than it looks so I was only getting 12 miles with the bigger 12s5p battery and at cruising speed of just shy of 15mph.

My comparison from the official stated distance was reference only, I knew I wouldn’t get that range with the 4p which is why I ordered the bigger battery.

So the way I see it is either the battery is a bit of a dud, which Ecomobl seem to think, which is why they are sending me a new battery, also they gave me a battery that was not the one advertised being used when I ordered the board.or there maybe something else’s that was playing up as it had the discharge running through the BMS, which they had to separate one for some reason and it only had 11 balance wires.

I’m in the process of dismantling the battery, I have tested all cells that are completely dismantled so far and they all are perfectly balanced at 3.49v so it looks like they seem to be working correctly.

Once I have them fully dismantled and find out if they are all good I’m sure it would be worth it to build a new pack out of them.

I feel like they’re probably still worth reusing. My guess is that the drives on the et2 are horribly inefficient and that might be attributing to poor performance

I’m sure the cells would do fine (better at least) on a urethane belt drive, for example.

Yeah that’s the build I’m going for with the cells,
I believe it’s worth at least giving them a chance.

My only decision with this build now is motor size.

I received my deck yesterday and I initially thought I could get creative and fit 12s5p but it’s just to small for it so 4p it is.