Collecting the discussion about the A123 cells here in order to keep the forum tidy.
The A123 LiFePO4 batteries at Batteryhookup are currently at $50. With shipping they end up costing $1.29 to $1.69 per cell (depending if you buy one or ten packs).

I did some digging and figured what these were exactly used for: As backup power to write data to persisten storage before shutting down in these devices:
“The VNX8000 uses two 2U dual 2.2KW Li-Ion standby power supplies (SPSs) with
removable battery packs and upgradeable firmware. These SPSs provide battery power to
the SPE and to the first DAE (bus 0, enclosure 0). This battery power allows the storage
processors to de-stage data in-flight to the vault area of the reserved space in the event
of a power failure. Once power is restored to the array, any writes that were de-staged are
reconciled and persisted to the target back-end disks to ensure that no data is lost.”

The fact that they were designed to supply only power for short durataion, and the fat bus bars motivate the thought, that they might be designed for high discharge.
They seem to be spec’d for 2420W (ebay source, EMC data source).

@Fosterqc has got a pack, and maybe together with @Scepterr we might be able to reverse engineer the BMS.

Personally, I think these might be amazing value if we could use them as-is with the BMS and enclosure. But space might be an issue.
With enclosure and BMS removed, they make for great pre-welded building blocks, that just need a charge only BMS be hooked up and are ready to go. They could be fit under a board like @b264 does with his Metroboard LFP batteries, just with a larger enclosure (any ideas?).

They are bulky and don’t have the best energy density, but they have decent power density, can be charged fast and cycled for ever. And I just have a soft spot for LiFePO4 cells in my heart. I might not be the only one:

A123 Build with PCB mock up -Help me see problems

I really like the LiFePO4 chemistry in a commuter board at 12S if extreme range isn’t your need. (Just long range but not extreme range

They feel hardly any sag at all, they have a super long lifetime, they are very good in very cold weather, and generally more robust than lithium-ion. Just less energy-dense.

@deucesdown has experience building with these cells.

A123 Build with PCB mock up -Help me see problems

Read this post and the links in it if you want to be amazed by how much abuse these cells can handle.

The 5% off code is GETHOOKEDUP5

don’t know how feasible it is to use that BMS, it looks like there’s more communication between it and what it plugs into than just latching a pin to high like on the other one

Yeah, it was used in a quite sophisticated system. Well, just removing it and adding a charge-only BMS should be pretty straight forward.

Any idea what the overall dimensions of the module are?

Does the BMS cutoff the output unless it receives a certain command?

A quick skim through the documentation reveals that the power supply/inverter unit uses RS-232 serial to communicate. 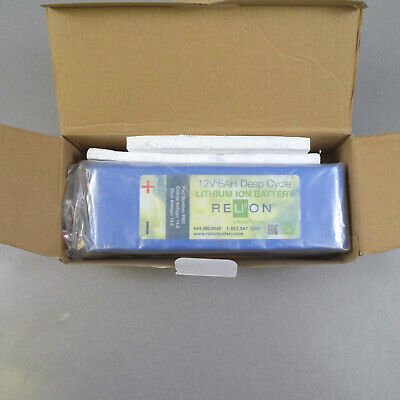 I’m guessing these use A123 cells, maybe someone wants to try to grab them.

Just an FYI the code ‘davidpoz’ will get you 10% off. This code won’t work when they have big sales on, but otherwise has worked for many months. I watched a single video the dude did on the batteries they sell and have just kept the code in my cart

Ideally you could just keep them as a brick, saving you the labor of taking them apart and re-spotwelding them.

The spot welded nickel is surprisingly thin, and not at all up to pair for outputting high amps the cells are capable of outputting (the claim 50a cont. and In a 4p setup… that’s crazy. The nickel strip is about the width of 2-3 tooth picks side by side with the thickness of what seems to be a human hair). They where definitely using this cell for its cycle life rather than its peak power.
You will not be able to pull power from the battery pack through the built in terminals in the pack standalone and the bms to be honest is just so big and bulky it’s not worth tryin to figure out.
The cells are wonderful though and the pack is worth getting.
Cut them apart, and 48 cells can get you a nifty 14s3p pack with 6 extra cells in case one or two is weak or just dead in the pack, you can just swap em.
Or if you feel sassy, make 2 12s2p hot swapable packs… at like 30$ a pop for each of those battery packs that would be a steal and a great jump on a neeto little commuter build

They are 3.65V full typically – although they rocket down to 3.45V in seconds (or less) and they are very tolerant to overcharge so this number is rather fuzzy.

Please someone (US), Can you help me order one or two…
I PayPal you them you keep it until Corona pass a bit, and ship it to me when we’re back normal ??

I could, but maybe it would be best for someone on the east coast of the usa because it would be cheaper shipping them from hookup to them, then to you.

also try emailing them to see if you could order then have them hold em.

I can do that, I’m in NYC
and I’ll poke around the BMS while I have them if you’re cool with that

promo code BATTERY works on this deal for 10% off 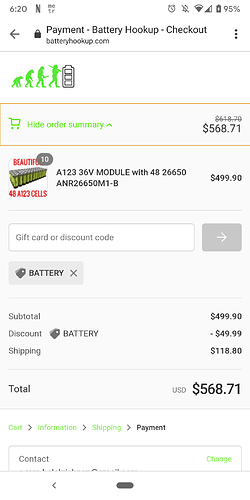 Still think we need ESK8NEWS as a coupon code.

These cells are amazing for a small board when you can charge everywhere, 20 minutes fully charged or 15 min to 80% and still 1000+ cycles, shame the energy density is so low

anyone wants to snipe me that’s cool

Hoooo, thanks a lot !! I will MP you ! I will keep thinking about the rest of the afternoon

Maybe more a US deal …

Thats quite high isn’t it ?