A scooter for the lady- Help wanted!

I want to get out on more scoots with my lady. She has tried esk8, but its not her favorite thing. She really likes some of the rent-a-scooters that we have used, and wants something like that. I have offered to build her an ebike, but she insists that she doesnt want that. “Bikes are for biking” she says. So she wants a sit down scooter that is NOT a bike (no pedals, smaller wheels, etc).

I would love to build that for her, but I’m struggling with where to start on a project like that. The first limitation is that I dont have a ton of money to drop on this build. Thats ok, because she doesnt need anything crazy powerful, but I still want to avoid going full custom everything, and would like a cheap starting point that I can build from.

Do yall know where I can purchase a scooter frame (that has a seat) that I can then build out? Im not finding anything, but thats probably because I dont know where to look. Even better would be to find a scooter with a bad battery or motor controller or something and then do a swap, but nothing is available right now on my local markets (offerup, craigslist). All the escooters up right now are the stand up type, which she does not prefer. I am looking at potentially adding a seat to one of those, as well as doing a full swap on the electronics, but I would love a more elegant solution if yall know of any.

Any input is greatly appreciated, thanks!

Check Craigslist etc for schwinn, currie, and gt scooters. 350s are nice to build on and have a huge metal built in tray. Some even have suspension built in to the front fork. Honestly the tires are big enough the suspensions not that helpful unless offroading. 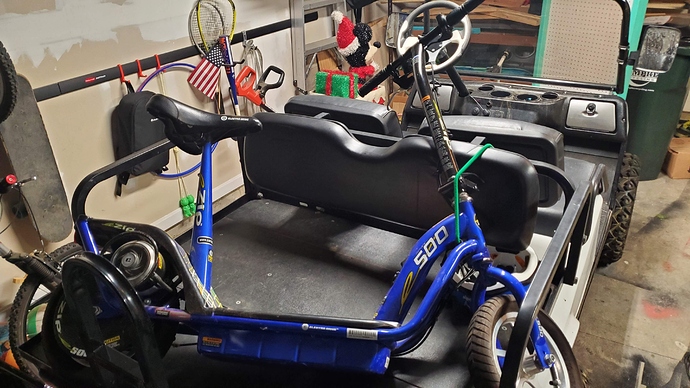 Changing tires sucks dick though cause no split rim. Get it on an ebrake so you don’t have to deal with removing the brake band system to change a tire.

I found one of these for $275 on offerup, but I dont really think its worth that to me, especially if im going to do a full electronics swap. What do you think of that price? It was posted 3 months ago, so if they still have it I could probably talk them down to $200.

Absolute shit. That one above was on the curb for free and the other one I bought a few years back for $65. I wish you lived closer, I’d give you the frame. Maybe check some neighborhood Facebook for sale groups. Lots of parents cleaning out garages.

In the same boat here. Esk8 is a no go for my so. I’m debating between a scooter or an e-bike. Doesn’t need to be super fucking beastly.

I’m debating between a scooter or an e-bike

If you can talk her into an ebike, they are better in every way haha. Also easier to build and source parts. Its so frustrating that she is so adamant about not wanting an ebike haha.

I do get her point

Could you explain it to me? Whenever I ask her to explain why she doesnt like ebikes, she just says “i dont know, i just dont like them” which is frustrating as hell when what she is asking me to build is something i see as a small, worse ebike

Cycling around can be really fun and if you have a e-bike that fun could be taken away. Although if I was in a hilly area and needed to bike virtually everywhere an ebike would be nice

Cant explain the love for scooters tho.

I guess i could understand that if you turn your only bike into an ebike, but im offering to build her a whole separate bike. If she wants to pedal manually, she still has her normal bike.

The same way I have my esk8’s, but I still have a longboard for pushing around.

I’m doing this sometime next year. Scooter is here already, its for Simon, but it could scale to lady size.

ali express 12" hub motor kit with throttles and all that: Thats pretty cool! I saw one of these large tire push scooters on facebook marketplace a bit ago, but it was adult sized and they wanted a lot for it. It would make a really cool scooter though haha.

how about the small folding frame ebikes?

Ebikes suck bc they are not a motorcycle

Craigslist is great but a ton of people have moved to Facebook Marketplace. When I was younger I had one of these https://www.urbanscooters.com/products/uberscoot-1000w-electric-scooter . The frame is great for a build because the whole base is hollow to fit the 3 12ah 12v lead acid mobility scooter batteries. And the motor was actually pretty good. The bad part was that it weighed 80lbs.

That actually is pretty cool! It would be more than enough for her most likely, and I could fit a beefy liion battery in there. Thanks!

This looks like fun Damon… did you ever end up building it? I’m looking at the chasis and wondering where you would stick the pack? I’d like to evetually build something like this for my eldest but I’m not entirely comfortable with shoving a few lipos in his backpack

I never built the scooter, no. I still haven’t built out the bike yet that I actually have the kit for.

I was looking at putting that kit on that 12" mongoose kick scooter but a metal box would need to be constructed into the frame and the standing platform raised slightly, so welding and grinding is kind of required to get a pack snug and safe inside of a structural/frame component the way a lot of electric scooters are built.

I don’t know how well it would work, but an e-bike style pack might fit on the neck of the frame below the handlebar bearings. I thought about that as well but it might get in the way of the rider’s knees, hard to say. Those are the only two solutions I was able to think of that didn’t involve a backpack of batteries, which isn’t something I’d want to do either.