Apologies, if I had more time I would have written a shorter letter.

Classical allusions are the way to my heart

What can I say, I’m commited to sounding medium-pretentious at all times xx 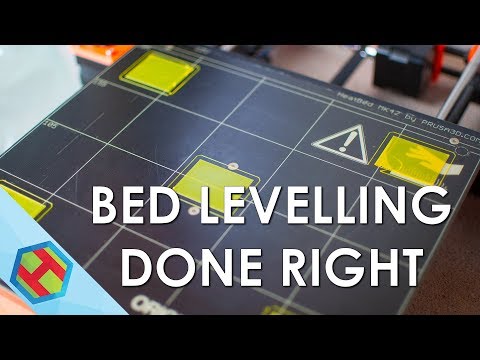 I had similar problems and worse with PETG, then followed the video above. Essentially, trying to level the bed with paper and eyeballing it or feeling it isn’t good enough for 0.2mm accuracy. Which is what you need on the first few layers to ensure proper adhesion. Printing the 5 squares is pretty quick and after a few iterations, you may be surprised how 1/2 a turn on a knob makes a big difference. If those 5 squares print perfectly I doubt you’ll have any more issues.

PETG is just more warp-prone than PLA in my experience, so to counteract this I usually use a brim on larger parts, 10mm wide or so and one layer thick. This really helps with corner lifting, and it’s easy to remove with a sharp blade afterwards.

I just recently switched from glass-and-gluestick print surface to a piece of G10 (aka FR4, fiberglass, Garolite, PCB material) because I got sick of my petg parts taking chunks out of my bed every now and then, and it’s been great so far.
The adhesion is so good I’ve actually been experimenting with omitting the brim (I used to just brim by default.)

Cheers that’s really good to know, I’m midway through the tuneup in that video. My levelling was indeed not very level

Huh I didn’t realise that’s what garolite is. Cool I’ll try widening out the brim once I’m happy this is definitely very level, I also saw a half janky suggestion to apply tape on top of a brim once it’s been laid down to anchor it and I find that quite charming

I’ve certainly done that a couple times to save a print that was trying very hard to fail on me, it can work in a pinch.
The adhesion force exerted by a brim when unbroken (not disturbed or beginning to peel) is really remarkable, and can definitely help reduce warping and corner lifting. If your parts are mostly fine but only starting to peel on a couple extremities, you can also manually add some little “brimlets” by adding 0.2mm thick and ~20mm round cylinder primitives to your slicer and placing them at the problem areas, like this: 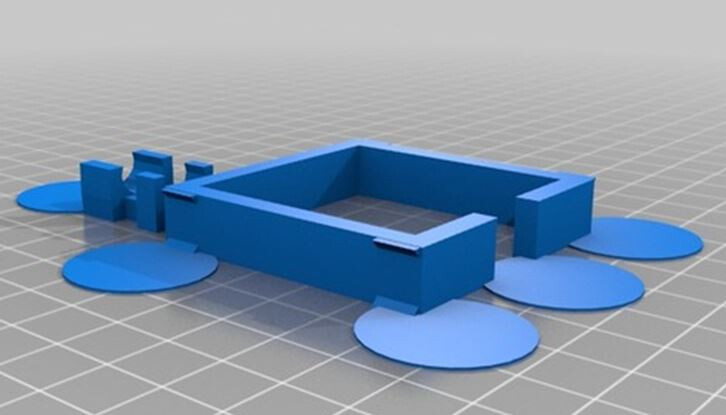 After about 5 iterations I’m fairly happy with the accuracy of the levelling, we’re now printing another riser with a big ol’ 15mm brim. By the time it’s done he’s gonna have three quarters of a stetson, but hopefully he doesn’t try and make another attempt to escape the build plate before then

Ok one step forward, two steps back. I tried adding another gcode file to the SD card that refused to be noticed by the printer, deleted some old gcode and it got worse, ended up wiping a bunch of stuff from the card. Turns out I didn’t know the Ender 3 won’t read gcode with a space in the file name, and had nuked the card including the config file. Didn’t realise, print came out with much better warping but also significantly underextruded because I unknowingly wiped the esteps, now have to fix that

Hmm I use spaces all the time in file names

I had big problems when it was the top file on the card but less so when it was in other positions? Yeah I’ve gone to google and now can’t find a source for that, other than people giving general advice to keep the file names short and cut out space to fit more characters on the small LCD. Will update if I find what I was referencing but I’ve definitely confused something. Edit: it may be a coincidental file name error, that I put in some other forbidden character like a full stop or too many letters and just misattributed it

On a related note have you had problems with an SD card with lots of files on it? Given how slowly the little microprocessor refreshes that basic LCD I had assumed it wouldn’t like to index a lot of excess stuff

Some mixed results after more attempts; I moved on to trying rafts but apparently didn’t have the z distance tuned and it’s impossible to separate. I’d wager that intended body of the part above the raft is dimensionally better than the others, but in reality the raft is fused in and is a bit warped so it doesn’t really matter

In nicer news though: I finished that spool and moved on to some transparent PETG and wow I love the look of it, I’m grinning just looking at the ugly first prints

So i did a 1 Hour print today and at the 45 Minute mark i happened to touch the Stepper Motors and noticed how hot they were.

Using a 2018 or 2019 Ender 3 (don’t remember which year exactly) with a recently upgraded 4.2.7 Silent Motherboard. Weather was 24c today (according to the weather station) Room wasn’t overly warm.

i haven’t touched them prior to the motherboard upgrade so i’m not sure how hot they got before.

These in case it’s relevant are my speed settings 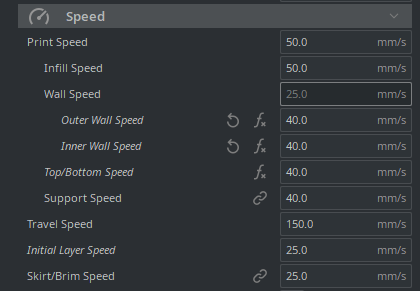 Is that somewhat normal to get that hot?

I would say it’s usually normal for steppers on a printer to get to at least 50c while printing, possibly over 60

Alright, should be normal then. They weren’t boiling hot, your temp estimate sounds about right.

They get stupid hot

I’m having trouble printing a thumb wheel part with a small locating pin, it’s a tall thin feature so I can’t seem to get enough cooling into it and the layers smush together. 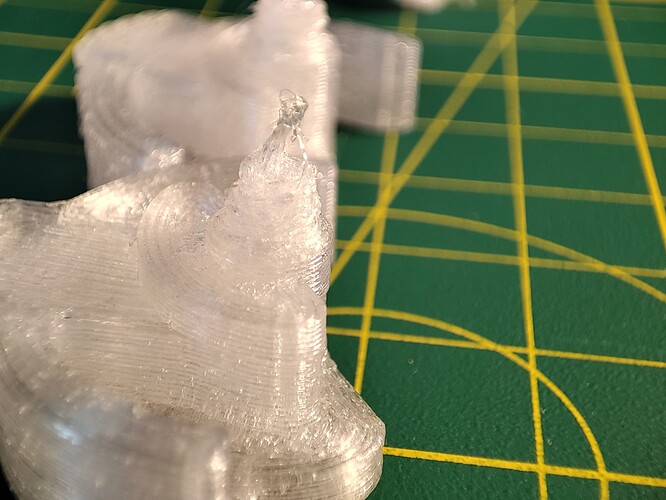 I had been printing with 20% fans all the time so I added auto fans at 80% and slower print speed if layer time is below 20s. Still didn’t work out and I reckon even if I slow down print speed the nozzle is still going to be in the area adding heat. I’ve been fighting the slicer for a while and other than ramping the fans up to 100% more aggressively I couldn’t find a slicing solution. Currently trying a janky little tower over to the side just to move the print head away and increase layer time that way, we’ll see how it works out 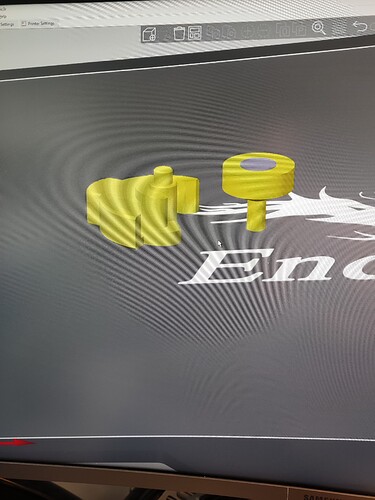 Any obvious solutions to this that I’m missing? Do some slicers have an easy way to add a “lift the head, go away, come back when the part has cooled a bit” command or does that just invite blobbing or clogging from leaving the nozzle full and not doing anything? This is PETG btw, if this doesn’t work out I might just switch to PLA

Cura has a combination of settings that could help with that. Minimum layer time either slows down the head or lifts and waits until it has elapsed before starting the next layer. That’s dependent on the minimum speed and lift head toggle.

Ah thanks, yeah the lift sounds like it would help here. My tower print just finished though and it worked a treat!

spectacularly silly video but I do really like it 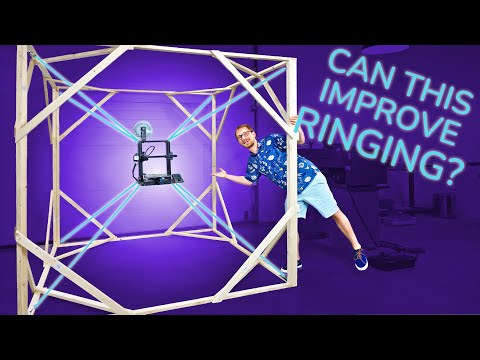 On an unrelated note, does anyone have a preferred brand of PETG, preferably available in fully transparent or coloured transparent? I’m using Rosa stuff at the moment just because it was available at an Irish retailer with v cheap fast shipping, but they don’t have any CF or GF stuff in stock and seem to have removed the clear altogether. I love clear