Hey all! I know this isn’t a full DIY build, but I’ve been really happy with it and figured I’d share.

So I own a Backfire Zealot. It has been a phenomenal board, but at around 2k miles, its deck cracked. Probably from me riding it off of one too many curbs. All its electronics (which are all original) were still totally fine, so I figured a deck swap was in order. I looked around and did my due diligence, and I ended up deciding on the Loaded Dervish Sama. Here’s how the build went: 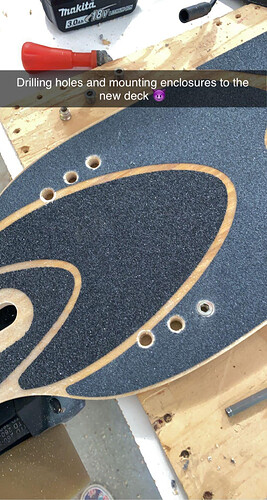 image910×1700 348 KB
To line up the holes, I just put the enclosures against the deck and ran the drill through its existing screw holes. I also used a countersink to widen out the top of the holes so I could make the wood inserts as flush as possible with the deck. I reused the wood inserts from the Zealot’s original deck, all I had to do was remove the griptape and unscrew them with a hex key, and then screw then into the new holes. 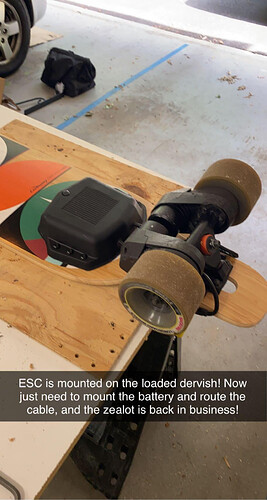 image910×1700 194 KB
The Zealot has these sheets of rubber that go between the deck and the enclosure so the enclosures don’t rattle. I elected to reuse them. I used a heat gun to loosen up the adhesive and peeled them off. I was only able to reuse the one from the battery enclosure, because the rubber around the ESC enclosure had been torn for hundreds of miles and was in desperate need of replacement. So to remedy that, me and my mom used the ESC enclosure as a pattern, and cut out a new piece from a sheet of rubber we had laying around. 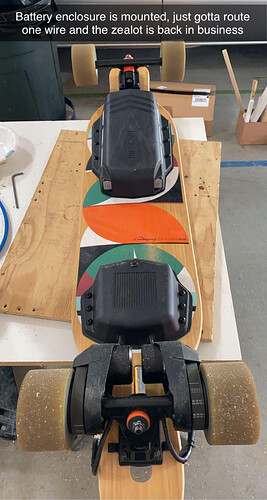 image910×1700 237 KB
I also reused the original enclosure screws and washers from the Zealot. If I’m reusing the wood inserts that they screw into, I might as well use them as well. 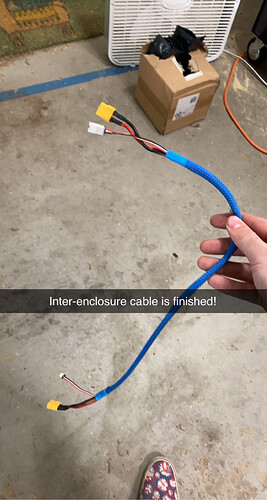 image910×1700 203 KB
One of my dad’s hobbies was building PCs, so he left behind lots of cable management sleeves and heat shrink. I used some braided PC cable management sleeving to protect the inter-enclosure wires, and I heat shrunk the ends of it to prevent them from fraying. It’s held up great and has really helped protect the inter-enclosure wires! 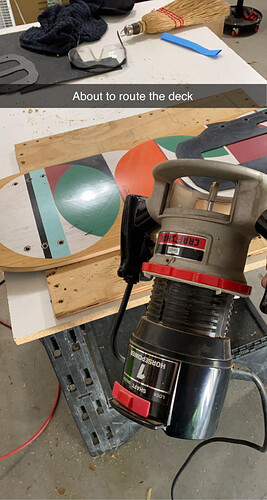 image910×1700 240 KB
I used my dad’s decades-old Craftsman router that to cut channels to get the wires out from under the enclosures. This is one of the few tools that he hadn’t taught me how to use before he passed, so I tested it out on some scrap wood first so I could learn how to use it. Ended up being the perfect tool for the job! 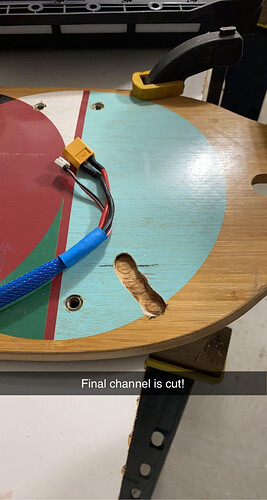 image910×1700 181 KB
Definitely not the cleanest channel ever, but it’s long and deep enough to get the wire out from under the enclosure without pinching it. I didn’t want to route a channel across the whole deck because I wanted to preserve its structural integrity as much as possible, so I opted to cut it up as little as I could get away with. My Zealot’s original deck had cracked at the wire channel, so I figured I’d just route the wire externally on this build. 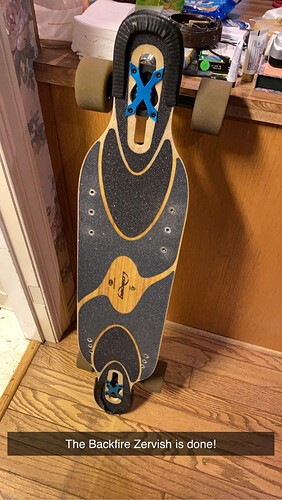 image960×1700 326 KB
The view from the top of the finished board! I actually really like the visible wood inserts, I think it gives it a cool, industrial kind of look.

image910×1700 481 KB
I used cable clamps that are normally for routing wires along walls in houses. Usually used for speaker cables. I took some shorter nails and nailed em into the deck to hold the inter-enclosure cable in place. They’ve worked great, and they’re wide & tall enough that the cable isn’t pinched and can still move freely when the deck flexes. 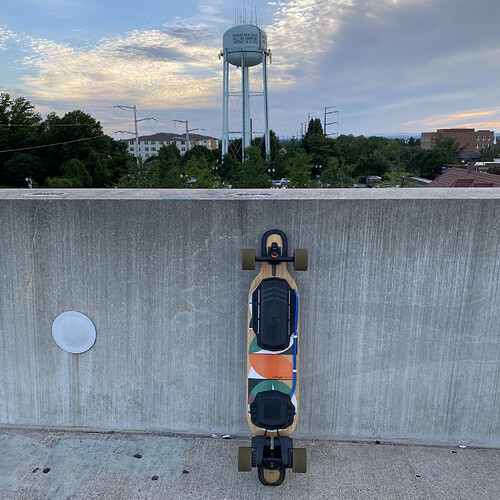 Other modifications I did:

I’m super happy with how this build turned out! Zealot electronics are rock solid. I eventually want to replace the stock Backfire wheels, but I haven’t decided what wheels I want to use. The remote shows your current speed, mileage, etc., but it only gives you a couple options for the wheel diameter. So if I get wheels of a diameter not in the remote options, my telemetry won’t be accurate, which would annoy me to no end. Also considering modding the remote by replacing its stock battery with a larger one so I won’t need to charge it as often. Overall though, I love this thing! Skates like an absolute dream.

Get yourself some MAD wheels! Sweet setup man.

This is a great thread, I’m a huge fan of reusing parts and modding existing boards.

me and my mom used the ESC enclosure as a pattern

I love that moms is in on this. One of my favorite things is riding and building with my kids.

Nicely done, that is a great choice for a board.

Also I can confirm that Backfire sells good quality batteries. I’ve had mine for almost 10 months now and it is showing no signs of dying. Compare that to the battery that came with my pre-built that died in 9 months of use.