Before we dive into my first published build, let me introduce myself briefly (I’ll try to lol…o_O)

My name’s George, nick’s Stealther cuz I love stealth games and the general concept of a lethal low-profile dude (or a girl). I’m currently studying my senior year of high-school in Victoria, BC, and picked up esk8 around 4 years ago. I started out with the Backfire G2s, and then the G2t, and then as I travelled to Canada last September, I got my board’s battery stuck in customs. I went to the airport alone and the security wouldn’t have it mailed back to my parents, so I had the remainder of my G2t and came to Victoria. From then on, I had the idea of starting my own DIY build.

The first idea was posted here

Dear fellow DIY esk8 builders Let me introduce myself for a bit regarding my esk8 experience: I’ve had two boards in the past: the Backfire G2S for a year but I only cruised on it for the summer of 2018, and then bought the upgraded Backfire G2T and...

I tried to fulfill it, didn’t really work out. The unity never arrived at my door, and just like most people’s first build, I’d imagine, it did NOT go well. I gave it my best shot.

Between then and two months ago, I was still figuring stuff out on my own, and finally, I did it.

The Stealth (photos later, don’t have any on my laptop atm)

Flipsky Dual 6.6 VESC Plus. Solid VESC, 100A continuous on each motors, and also the 21mm height is really small for its power.

Trampa Wand, great remote, not as good as Backfire’s R2/3 remotes, but it’s one of the best ones I’ve used made for a VESC.

Dual Flipsky 6354 Motors 190kv, set up with 30A each and 45A max. These motors got crazy torque, literally slaughtered my friend’s ownboard 6368 motors, absolutely insane.

Loaded Cantellated Tesseract, amazing deck, super stable at high speeds due to its original usage for downhill, and the kicktail is just absolutely incredible. The deck really gave this build its life.

Caliber II Trucks, bought because the mounts I had were from Mboards, and I didn’t really want to invest on more mounts.

Orangatang Caguamas 80a, the width of this wheel made it amazing to ride on asphalt.

The result? A nimble beast that crushes the hills and the city! The only thing bottlenecking this board is the battery pack, which I’m planning on making another one soon out of P42A. It’s got a 51kph top speed on flat ground and can climb 25% hills with a load of 100kgs. It took me a whole 8 months but I finally did it! The torque is already quite good, at 30A each, but with P42A pack that has enough discharge, the motors can be configured to 60A, practically doubling my current torque. I’d love to see how this board does after my upgrade. Right now, with mellow riding, it’s got a range of 15km with 15wh/km power consumption. I rode the other day downtown aggressively with full throttle the whole time, and a lot of stopping and going, and it was 20wh/km, giving me around 11km range riding like a jerk.

That’s it, folks! If you wish to build this yourself, the cost is around $1000 USD without the battery pack nor the BMS. All last, this build turned out pretty damn well and is definitely one of the favourite boards that I’ve ridden. I’ll update my friend’s build, which I was involved heavily, in another post, another day.

That’s all for now, stay safe!

omw rn taking them
if it was gonna for anyone, it would be for you @glyphiks

Calm your tits son, I only want you for your tessy. 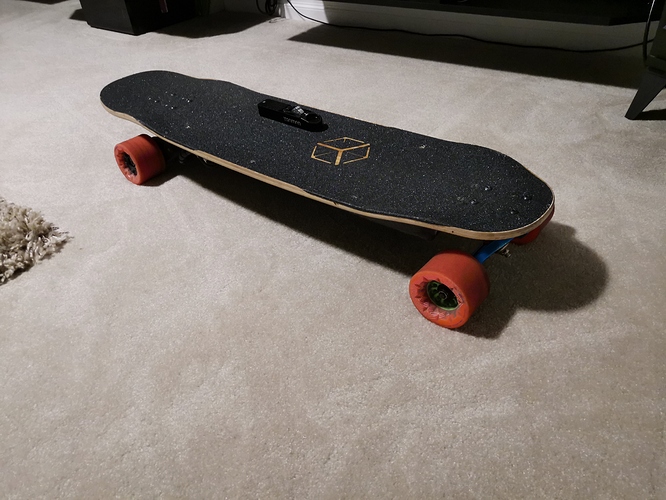 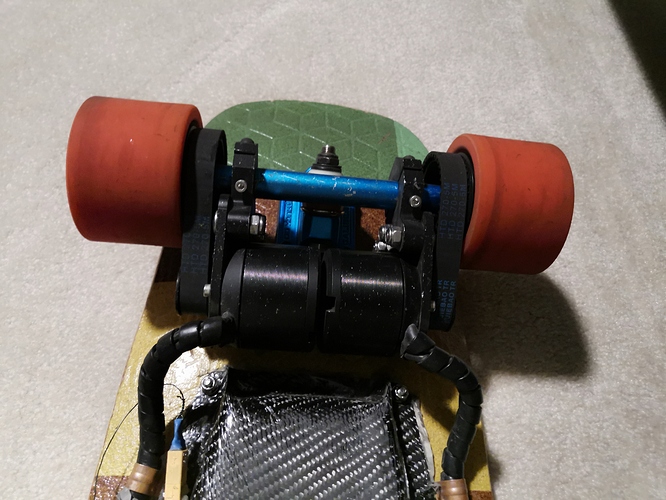 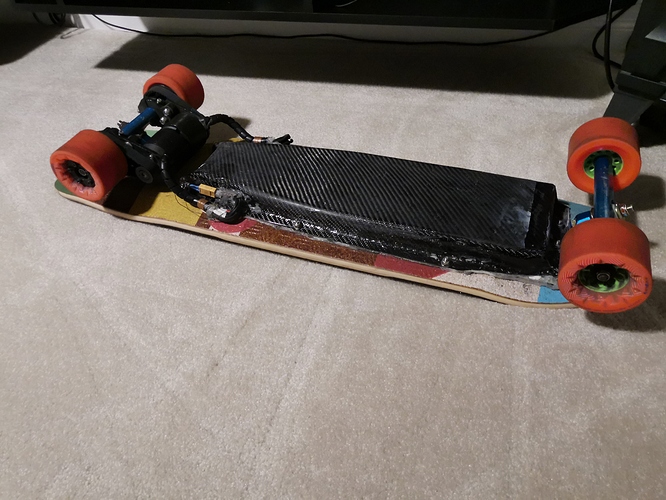 Nothing like a pimped tesseract i am not a huge fan of composite midsize decks. But the Tessy is something special.

Where does the stealth come into play?

I was gonna CB the whole bottom of the deck in the future, rn the top is pretty blacked out. Was also thinking about cooking (killing) the wheels black with food colouring. Didnt have any black trucks on hand. Also, it’s named the Stealth mainly because that’s my nick xddddd

I really need a cantellated and a truncated tessy. I have a full one and it’s such a pleasure to ride.

Had to do it from the sides, if I went in from the back (xd) the motor would squish into the wires. I did not like the idea of them hanging down the enclosure too, so looped them from the sides. It worked out great and even hid the switch and the charging port slightly.

You want this stuff:

Beautiful build Stealther. Can you confirm your Wand/Flipsky Vesc combo supports all the functionality of input calibration that the VESC tool has to offer? Specifically, control mode (ie current/current no reverse/duty cycle…etc) and throttle curve customization? I too have a Flipsky dual FSESC but my Flipsky VX2 remote does not calibrate with VESC tool. I like The Wand but want to make sure it’s fully compatible before purchase. Thanks.

My Flipsky Vesc is V6.6, and it works with the Trampa Wand basically plug and play. The Wand also offers bluetooth connectivity, meaning you don’t have to buy the bluetooth module on its own (which I’ve done and facepalmed about)

That being said, I suggest you take a look into Davega X display plus Flipsky VX1 or Hoyt Puck remote combo. The screen on the Wand is very small, and potentially presents danger when you take too long to glance at it. Otherwise, I’ve been loving the Wand, especially its wh/km display and the temperature monitoring.

Thanks a lot Stealther! Very helpful.

Have you mounted a DAVEGA on a downhill deck like the one you posted? I am, coincidentally working on a similar dual motor build using the Madrid Carbine deck (orange wheels too very funny) and i actually ordered the vx1 two mornings ago out of impatience before seeing your reply. i am concerned the display will get in the way of my lead foot in heelside carves. I will have to get the board out for a ride and see where my foot is. Perhaps there are some less robust bottom mounted displays…