this all started more than a year ago when not many 4wd builds could be seen and I wanted to build my ultimate painkiller, which would solve all the pains of boards for street:

building something that solves all of the above

so I ordered redember 44 from @jamie. some time passed and I pulled the plug and ordered gear drives and adjustable baseplates from @3DServisas. 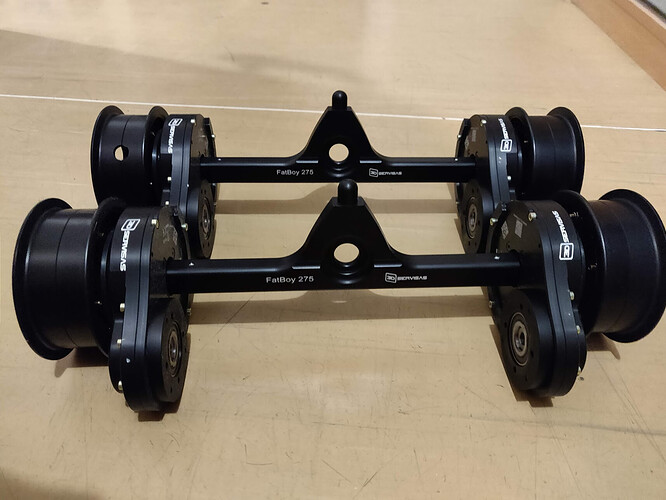 then the deck arrived, in all its 44 inches of dick erecting glory 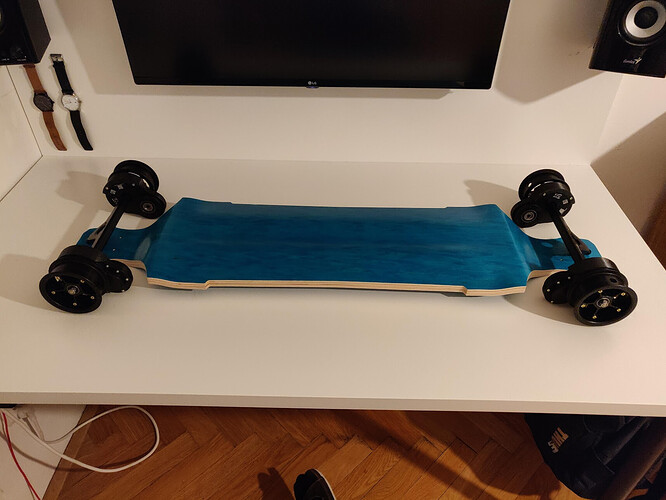 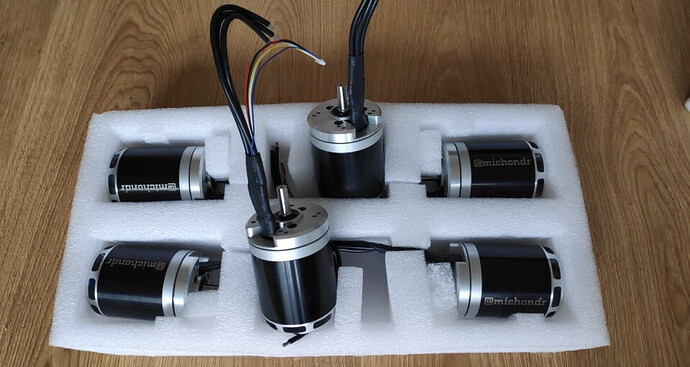 well, first of all, I got my hands on the deck 366 days after the inquiry. sheesh, that’s a lot of time. this is solved now.

secondly - the battery and the vescs. a number of cells in each P group is certain - as much as humanly possible to stick under the re44 in 2 layers. the number of S groups is first catch.

higher voltage means higher speed and at this point, voltage and wheel size are the only variables I can adjust (kv and the gear ratio is set). at 12s with 150 metro boards tires its close to 60kph which sounds nice, with 8" tires it’s 77kph, which’s manageable. at the higher voltage, the speeds are through the roof and I’m not sure if I want to sacrifice the torque.

I think one more variable I should mention - I chose to abandon the sensors - although the motors have them, I got used to the convenience of only 3 beefier wires and ditched the pain-in-the-ass sensors. a year ago sensors were necessity but after two boards running HFI on unity it seems like more work than use. and I also somewhat remember what happend to @glyphiks when he sanded his wires off.

what I’ve not seen before is the arrangement I plan to have (if battery would be 12s12p):

motivation is space, where vescs at each end take up too much space where the battery should be thickest, and longer phase wires are (what I read, heard, and used) more electrically stable than longer battery wires (due to higher impedance and current spikes). problem might be temperature, but lots of people are riding 2wd without a heatsink and inside the enclosure. there should be less heat dissipated per vesc at 4wd.

and the space in the middle next to vescs will be used for junction of balance leads from the batteries (so that it behaves like one), neptune 15 connection, buck converter for LEDs epoxied between layers of enclosure and reciever/s

I’d love to fit dzus fasteners to hold the enclosure! all the electronics will be mounted to the deck, so for a quick look or debuging something, just turn 8 screws 90° and be inside the enclosure.

so guys, what do you think of the vesc dilemma I have? which way would you go?

Looks awesome. Interesting to see different layouts. I’ve gone ESCs at opposite ends with the longer battery leads so see if I encounter any issues. I’m still yet to ride mine but it has bench tested well in 4wd using the Maker X DV6s.

I would go for the makerx dv6.

Where did you get the motors?

At the point where already this build has costed you so much you may as well go all out with the vescs no?

I think you should replace this entire section by: “I’m bored and have enough money to spend on science.”

How fast do you want to go? With the right choice of motor KV, pulley size and battery voltage, what is the limit with 2WD?

I agree there is a trade-off between speed and torque but again, how much do you need?

Just get a gear drive, this is not specific of 4WD

Also not specific of 4WD

4WD is more complicated than 2WD, so it will be harder to achieve that.

Don’t get me wrong, I like what you’re doing. Would also love to start a 4WD project, but for me the only rational reason for it would be to have more traction for offroad riding.

well you summed it up quite well, I might be more specific - we’re having quite a different places to ride here in prague/czech republic

firstly, there are the bicycle paths - I’d say this board would be too much for that, but it can ride there
secondly, the streets - there is a lot to go on streets, as @Esk8_Spirit shows ,
thirdly, the “countryside” roads,
not a lot of rougher terrain

also another variable is the weight - I can be moving 100kg of complete weight, your board might be carying less weight, so breaking and traction while breaking is big concern for me

I’m curious what you will come up with!

what are the reasons for the makerx dv6 for my case? are people using it ofter for 4wd becuase of two of them being more affordable, or is there another benefit?

that is for sure! what would be the benefits for HD compared to the MK6? or vice versa?

well, kinda. it’s reasonable not to waste money for any good reason, so I’ll welcome cheaper option if the more expensive unit does not bring any benefit

Im no expert, but I read somewhere around here that long motor phase wires will cause much bigger voltage spikes than shorter ones.
I like the layout very much, maybe someone knows more.

Im no expert, but I read somewhere around here that long motor phase wires will cause much bigger voltage spikes than shorter ones.

The problems resulting from long battery wires can be mitigated by adding capacitance, but that will directly work against your switch or antispark solution. If you’re using a loopkey, add as much as you want

Generally you want a very large capacitor (thousands of microfarads) or two and a few very small capacitors also. (tenths or single microfarads) Not solely big ones.

Size and $. 4WD with big batteries tend to suffer from space issues for components like motor controllers.

a lot to go on streets, as @Esk8_Spirit shows ,

Buy Trampa’s VESCs, brings all the benefits, opposite of wasting money. We should be pass trying out new stuff cause it’s cheaper.