Got the first of two adjustable TKP baseplates from Surfrodz. Was planning to pick up adjustable baseplates from @rey8801 but missed the group buy and was looking for something stateside where possible. Let me start off by saying the pics of @rey8801s adjustable TKP plates suggest they’re a better design but I’ve never worked with them. At $75 ea, SR was slightly more expensive as well. Get reys
Recently, surfrodz updated these were in stock. They have been present on their website for sometime, but listed out of stock.
(Also to note, some email exchange with SR revealed that they are discontinuing colors for most trucks and will focus on black and silver with limited runs of single colors from here out). The website had very little info about them and I haven’t been able to find a single photo or user experience about them here. They were like this fucking mystery that no one ever talked about.
So when they arrived, I was pretty excited. Especially since I had no idea what to expect… @ThermalChild said it best 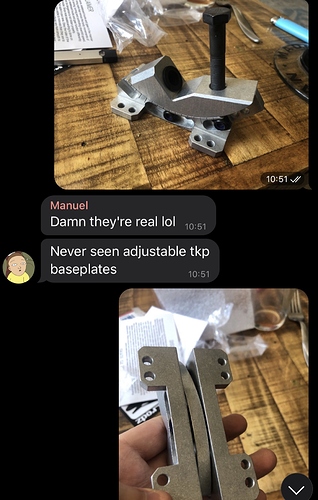 So the SR TKP are a three piece design. There are two cross bolts that hold the center portion with the pivot cup and kingpin together with two separate baseplates that come together and mount to the deck. They are not adjustable without removing on drop through setups, but would be of top mounted.

The baseplates included a kingpin bolt but not a bushing washer. Currently the bolt is 82* to the baseplate so I have a feeling I have some work to do. What’s the reference to measure kingpin angle single the pivot cup and bolt are not aligned?
I measured the baseplate to pivot cup angle at 42* on the stock. Have the adjustable at 35 currently.

Also, the ride height increased by approximately 17mm but may he position dependent 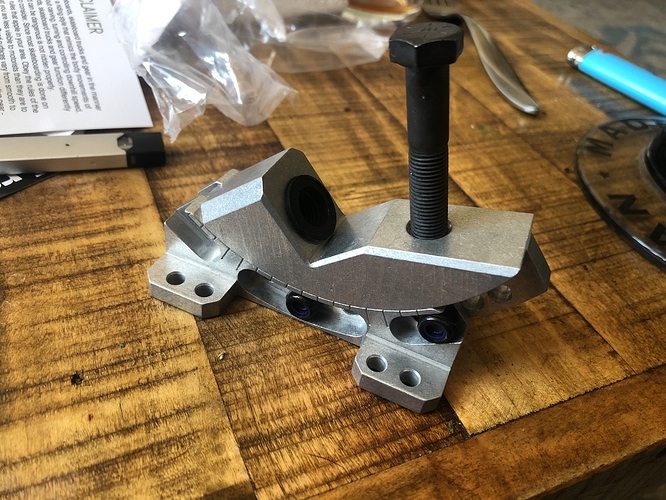 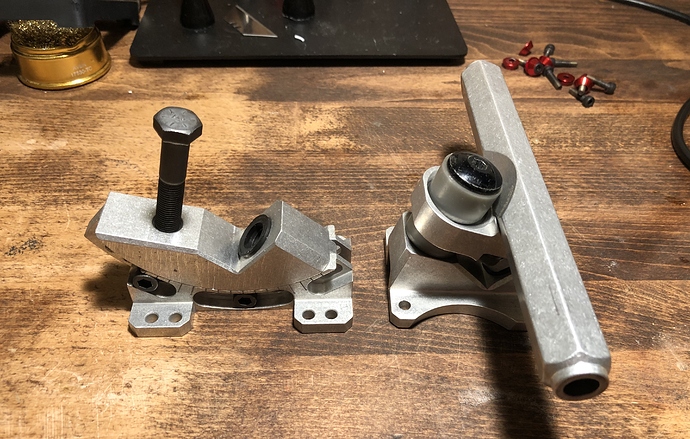 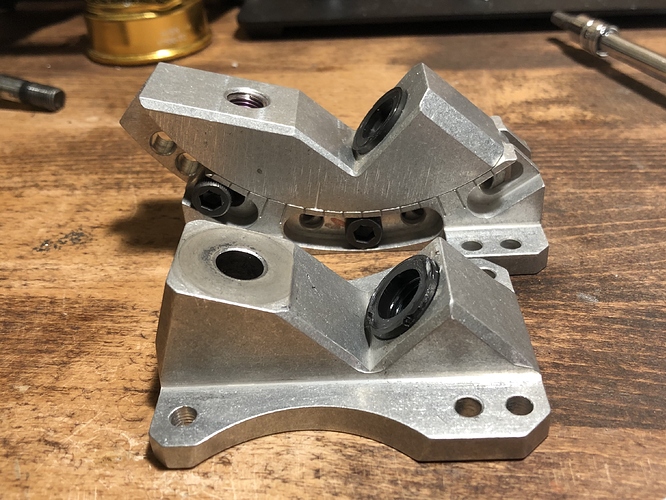 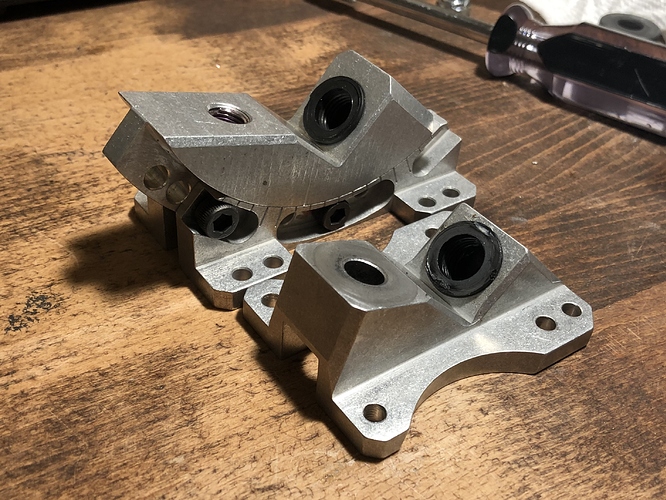 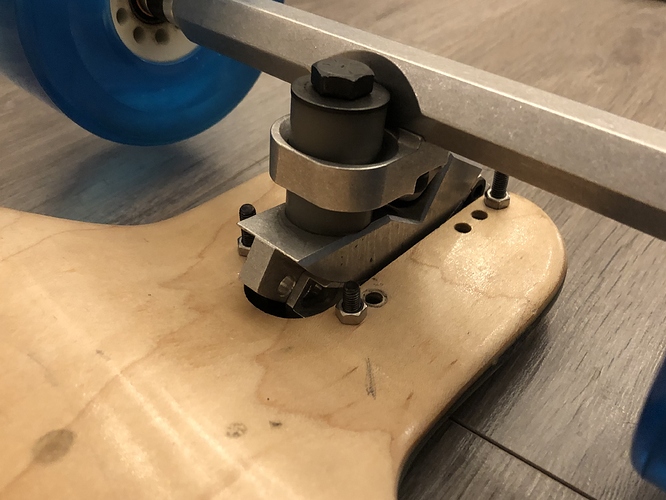 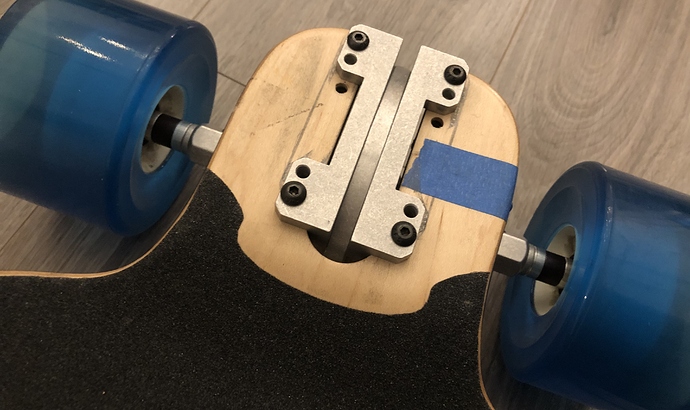 image4032×2400 2.13 MB
177 TKPs on 110s, bustin sportster
Created the thread so this was findable. Also, any input from those who have messed with TKP angles should provide some input. There’s very little here regarding tkps

Oh knock it off bro. You need to stop being so drama

Haha I actually wanted the ride height. This deck is pretty low on 110s and the eboosted enclosure won’t have a ton of clearance. I tend to hop the occasional curb and ride on shit streets so the extra 1/2” will be nice.

My OCD kicks in hella

I feel ya on that. Just had a funny idea. So these are actually about 17mm higher in the current position. I could top mount the front truck and be only 2mm low in the rear. Nahhhhh

Could never. Particular AF too.

all in the details

Hahaha exactly! @CiscoV is particular too, just doesn’t want to admit it

Hahaha ya he is @CiscoV owns no less than 13 of every esk8 part. When I need something I always check to see if he’s trying to sell one off first

We all arnt hoarders as you

@bwahl602, any issues with the threaded insert for kingpin on those? Does kingpin thread in smoothly?

Just received some and the insert looks a bit damaged (Straight out of the box) and kingpin bolt is pretty stiff to thread past the deformed part. 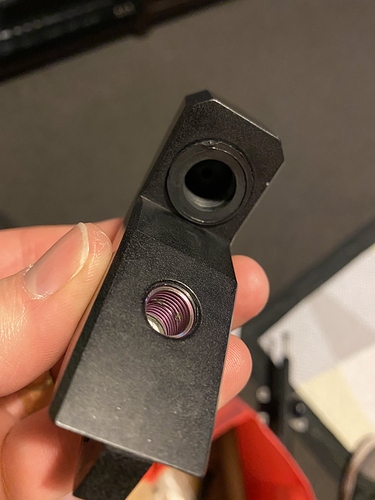 I have hit SZ up and will see what they say about it.

I will say kingpins that end at threads are not the greatest idea. It’s why most trucks have pressed bolts with extra long shoulders. Lot of repeated stress on the end of kingpin/beginning of baseplate. Not a place where u want threads. Just my 3 cents

I had a bit of a booger we area as well. It threads fine but definitely has some resistance about the depth yours does. Keeps it from falling out

And why put in an insert aswell

Yeah… Im not fond of that, prefer a good thread in aluminum then prob (with these forces rather not like you said)

its a restriction in the three piece design, theres no way they could have done bolt through.
Ideal no, availability is key.

Dudes. What are you doing for mounts and motors? You can fit dual 6374s on these 177s, correct?

Depends on the mounts. Im running some tiller plates but a press fit on the end would give a bit more room. Im running 6365, but I have 25mm of “spacer” on either side with the BN axles