I’m trying to put together my first build and I was thinking of a 4x4 Evo 40 Spectrum since it seems that eBoosted makes a 12s8p pack for it. So with two Focboxes in there, maybe I can get a 10s8p?? The main purpose of the build is some moderate offroading and general urban use. I live in an area with a ton of hills so it has to climb steep hills quickly. I’d run 200x50s most likely and probably gear it for a top speed in the low 30s as I dont need to go crazy fast and prefer more torque. I was thinking of maybe four 6368s for motors.

Anyway, I mostly wanted to know how the build differs from a 2WD build in terms of planning. For example, for the trucks would I just get two rear trucks and mount the front truck backwards? Is it more ideal to mount the Focboxes on top of each other in the back of the enclosure, or put one on each end of the enclosure with the battery in the middle?

In terms of millage, how much does adding the two additional motors decrease mileage? I’ve heard reports it’s as bad as half the millage of 2WD, and others saying it only shaves maybe 10% off.

and others saying it only shaves maybe 10% off.

I think this is more accurate but at the same time, it really depends on how much you full throttle it

for the trucks would I just get two rear trucks and mount the front truck backwards?

The trucks are the same front and back

As for motor mounting direction, I’ve seen it both ways, front mounted, or under deck

This deck and a double stack enclosure from EBOOSTED fits a 12s8p 21700 pack with dual stormcores and a smart bms if you put the bms on top of one of your stormcores.

I would recommend some sort of compact drivetrain, like gear drives over belt drives.

But honestly, from what you have described up top, I think a really good 2wd will do you much better than a 4wd. It’s alot more complicated to build a 4wd. Takes alot longer, and it gives you performance you will never be able to max, especially if you are gearing it for 30mph. The torque will be unusable and you are always going to have to be super gentle with the throttle, or it WILL throw you off.

if it helps, i’m 120 pounds, cruising only up to 30mph atm, and get, anywhere from 16-24Wh/km total give or take a few? (milking it to riding not all out, but fairly reasonably)

compared to 2wd, it’s also 2x as expensive and as heavy, uhhhhhhhhhh

complexity, it’s about 2x as much? it’s basically 2 boards but they share the same deck and battery

for the CAN it’s advised you use a shielded cable since it’ll span the length of the deck, best have an esc on eacg end to keep cable length to a minimum

atm, 5.2 also has issues with can IDs so you gotta do a few loops while setting up the escs, tho 5.3 shoullld fix that issue

performance wise, as artem said, ya it can throw you off p easy

in short, do 4wd if you’re up to the commitment, if not, 2wd is more than enough for ya, even for offroading

Awd really helps if you ride in adverse conditions and never have to carry the board.

never have to carry the board.

It depends how much power you can put down. Typically, you’ll only be able to put down X amount of power and still be able to stay on the board.

In my experience, the range hit from 4wd is negligible compared to 2wd. I even have logs showing MORE consumption in 2wd than 4wd on the same board because the 2 motors had to work so much harder to deliver the same power.

People who tell you that 4wd halves your range have never had a 4wd and they’re just jealous they can’t afford or aren’t able to build one.

Less time spent spinning out and restarting from a stop off road.

i drag mine wherever i go if i’m indoors (in the shopping cart if at store), fucc carrying my bitch (bless her gears) up the stairs more than 1 flight

can confirm, i can’t afford it and built one

it’s like 1wd v 2wd, but doubled
i don’t think i’ve seen a 2wd have galf the range to a 1wd assuming all things equal except motor count

not bad all things considered

I heard a long time ago that they have spectacular brakes but not significantly better launch compares to RWD, and that they fight you a little on turns

i wouldn’t say “fight”, it more just feels less, playful, than 2wd
turned on 4wd are just easy to make but while carving i find it’s more serious and doesn’t fling you around like 2 does

How is tire wear on 4WD? Do they overall wear less quickly compared to rears on a 2WD system, or is it still biased towards the rear due to weight transfer?

Depends on your style, throttle wears the back and brakes wear the front

i found pretty even wear 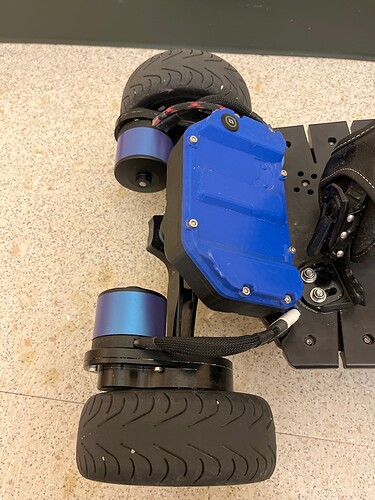 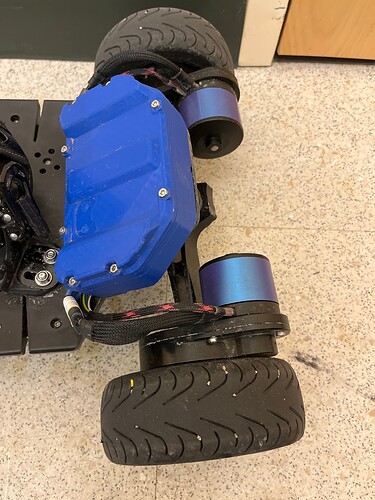 The main purpose of the build is some moderate offroading

I wouldn’t be looking at a double stack under slung enclosure for this.

This is so true with my 4wd setup i had before i broke some parts XD, i was getting 20-25 miles goin 25 mph on average on 145mm tires with tons of hills i mean literally every other street was a hill whether being up or downhill on a 12s10p p26a pack and got the exact same range in a 2wd configuration with the same 145mm wheels with the same gear ratio on the same terrain.

Alot of times @Audiobahn1000 people to try to talk down on 4wd as glyphiks mentioned having never built,ridden or did log data test comparisons between a 4wd and 2wd build of same voltage,gearing,wheel size and amps settings. Or even rode on a proper 4wd vesc based build and not some shitty prebuilt 4wd board.

Another thing to note is 2wd and 4wd are in two completely different worlds of there own and should never be compared to one another because there is big differences between the type of optimized setup that makes a 2wd board have great torque and acceleration with x wheel size and gear ratio is completely different from wat is a optimized setup for a 4wd board to have good torque with x wheel size and gear ratio.

And as far as how much range ur gonna get from a 2wd vs a 4wd it really comes down the amount of Ps u have in that battery pack configuration and the cell you choose more so then the voltage of the battery pack itself. Since not all cells perform equally and certain cells preform worse or better under load then others while also holding more energy at certain voltages then other cells. Since the more Ps you have in a pack the less your battery will sag under load aka while ur riding which will give you more efficiency/range. So for example if your riding on a 4p pack and every time u put that pack under load u voltage sag between 2-5 volts vs riding on a 8p pack voltage sag under load would possibly be around 1-3 volts ur wasting less energy with the extra added Ps.

Also one more thing i wanna add to this as well is the wh/mile difference on 2wd in particular with high gear ratios vs low gear ratios on x wheel size. In my particular use case ive currently been riding on a 2wd 4.4 ratio 12s10p p26a diy gear drive flux with 8" kendas. average wh/mile is 40 and highest was 100 wh/mile with vast majority of the rides wh/mile bouncing between 35 -80 wh/mile.

Now that same battery pack used it on a 2.78 2wd gear drive diy that was originally a 4wd with the exact same 8" kendas again average wh/mile was around 40 wh/mile and highest wh/mile log ever spiked was 90 wh/mile with overall averages bein between 35-70 or 80 from time to time. With way less torque of course but ive never personally found a benefit to havin a higher ratio for supposedly ‘more efficient wh/mile’ then a lower gear ratio using the same tire size in 2wd. Of course for 2wd u need to have at least a 4.0 ratio or higher to have good torque to blast uphills and launch off the line but lower ratios on 2wd arent good unless u use the appropriate tire size that is optimal to have that same feeling of good torque and acceleration as a larger tire, high gear ratio board.

Tell that to Lacroix and their $7000 behemoth boards

Eh those are street boards, not exactly off road boards. You can take a Ferrari onto a rally stage, but it doesn’t mean it works well.

I guess everyone has their idea of what “moderate” off-roading means.