First I just want to say, yes I have read the rules, I know I’m not allowed to say “sold to best offer” that said, I’m also not capable of pricing fairly. I don’t know the worth of my parts so I will need to take input and adjust pricing accordingly and I am open to offers. 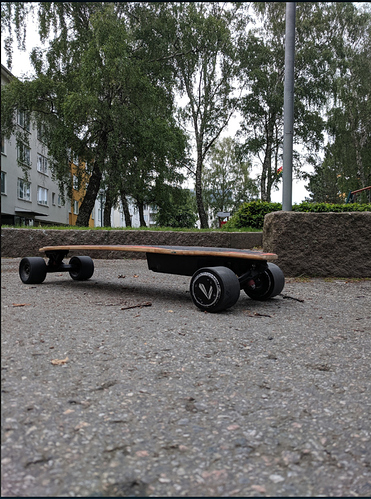 4 Landwheel L3-X batteries and chargers:
Two of which are pre-updated BMS, read more about that here: https://forum.esk8.news/c/esk8-parts-market/used-parts-for-sale
Two of the batteries are in good condition and one of which is with the new BMS. I had no problem getting far and pushing my board hard with those batteries.

The other two batteries are iffy at best, death trap at worst. The one that ended up breaking my Landwheel ESC is with the new BMS, but often shuts off and has problems. I’m not sure what can be done with well worn batteries, maybe can be fixed? I don’t know.

I have two charing docks, and three chargers.
Two 42v chargers (for new BMS) and one 40v charger (for old BMS) 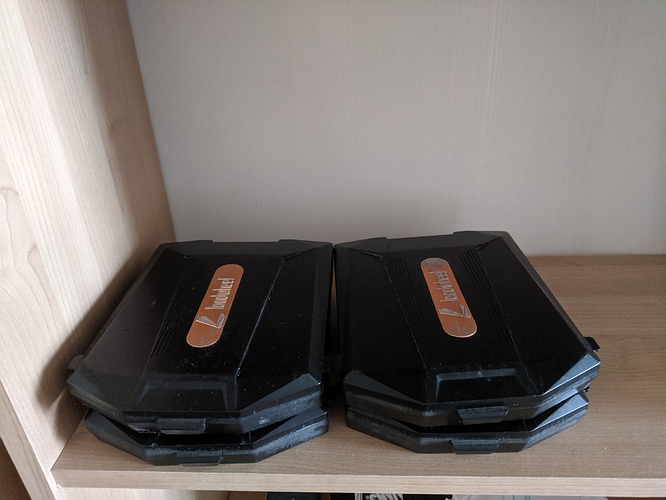 Wheels, trucks and bearings:
2x almost brand new PU wheels that were only used for maybe 50km of riding on asphalt. Sides have been sanded down to avoid chipping.
Trucks, hangers, wheels and bearings are all intact. Front wheels spin very well.
Also, NO I did not ride with only 2 screws. That picture is from after the damage when I disassemble everything. 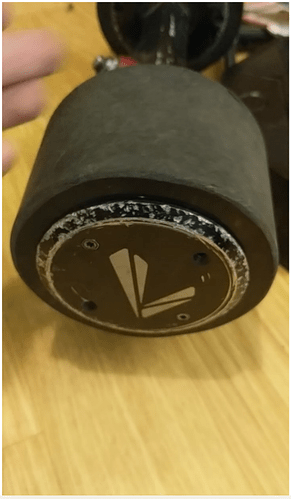 Hub motors:
One has been replaced by Flo very recently. The other motor I never had any problems with. Both ran very well.

Remote:
The remote has good battery life, no issues and was bought new earlier this summer.

2x
Never been used, brand new. One of them has been taken out of the package, just read the manual and took off the plastic. Never actually used. The other is still sealed.
This is the exact model:

This listing only ships to Germany, I had it shipped first within germany, and then to Sweden.

Pricing is not set in stone. I am willing to make deals and lower my pricing. Same goes other way around, if I figure out I highly underpriced something I could change my mind and bring up price.

what is shipping to uk going to be like

what remote and does motors mean hub motors

Here is shipping to UK up to 2kg. Prices are in SEK. in GBP for 2kg it is 22 GBP. Lighter packages are of course cheaper. 3kg is 351 SEK, 5kg is 387 SEK. Of course all with tracking and quality shipping and insurance.

do you know about the batteries

what cells in what formation

I don’t know much, what I do know is they are 115wh, 3200mAh and they have a very high discharge rate and use a proprietary BMS and are made to be hotswappable for a Landwheel L3X

I believe I have read that they are 10s, can’t confirm though.

Yes. From what I understand everything in them is the same except for an updated BMS. The updated BMS made them safer for regenerative breaking so they won’t overcharge as easily. I have used both sets of batteries and there is no power difference.

also do you have the esc for it

I have the ESC, but it’s fried. I used one of the bad batteries and the ESC broke. Now the power button won’t turn on. Was planning to use the flipsky vesc and rebuild it to work again, but I ended up getting a good deal on the upcoming revel kit and it’s set to ship earlier than first expected.

These batteries do not have traditional cells. Landwheel runs these at a high discharge rate and uses custom Lipo pouches inside. The batteries are 10s1p and the pouches are soldered to a circuit board inside the case. I know because I have disassembled these and frankensteined them into a 8s3p pack for a DIY hub build. 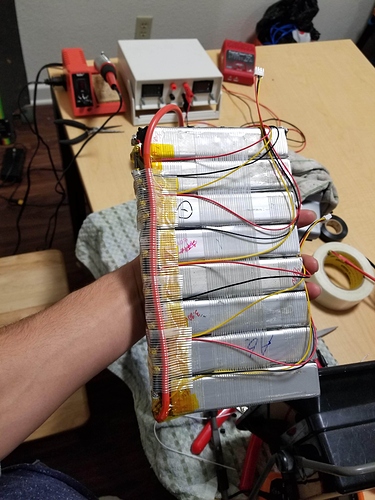 impressive. Not interested in adding to the Frankenstein monstrosity with more Landwheel cells?

@ShutterShock
How did you divide the lipo pouch?
I also have two dead Landwheel battery packs. It was stacking firmly, so I gave up reuse…

I was planning to write an article on the forum of what I did to create my landwheel battery / diy upgrade but I never got around to it. Maybe I will if there is interest, these batteries don’t seem to have very good QC, all of mine had one dead cell in each which caused them to be un-useable.

Do you mean it was stuck in the case?

Yes, I wanna disassemble the cells separately.
Is the cell fixed with double-sided tape only?

No they are literally like silicon glued into the container. I hacked the crap out of the battery enclosures to get the batteries out safely without prying them lol

Thank you.
So, has your Frankenstein build been completed?

For now, yeah. I think I will write out a build thread tomorrow and post it here!

For anyone that was wondering I have written up a complete post on how I did my mod:

Hey guys! I will start this out with pictures of the finished product since that is what most DIY threads do. This is my Landwheel mod/build and it has been ridden for probably 100 miles so far as a mod. The donor Landwheel L3-X that it originated from had pretty good miles on it as well, I am not exactly sure how many though. The Landwheel is a pretty capable machine, but to be honest, the batteries and ESC were not quite up to snuff. As you will see in later pictures, I disassembled all o…

Do you still have the vesc maybe?