I picked up a reasonably big battery for cheap because it’s from a big retail brand with a physical branch near me so if it’s crap I can at least return it easily and not have to chase an aliexpress vendor into Mordor.

It’s a “20/40V” setup, so it’s effectively two 5S batteries strapped together with both sets of terminals exposed, the tool either runs them in series if it can take higher voltage or in parallel if it can’t. Effectively 10S1P 2500mAh, in a reasonably nice GF30% PA6 enclosure (glass fiber reinforced nylon), with a skeleton, some rubberised impact padding, and an easy enough charging method - for the princely sum of €40. Given they’re power tool batteries and not super high capacity I assume they’re reasonably high discharge but I can’t find anything from the cell wrap so far, if you’ve come across them @Battery_Mooch let me know. I’ve seen these packs run a lawnmower or hedge trimmer in the past so they’re probably alright 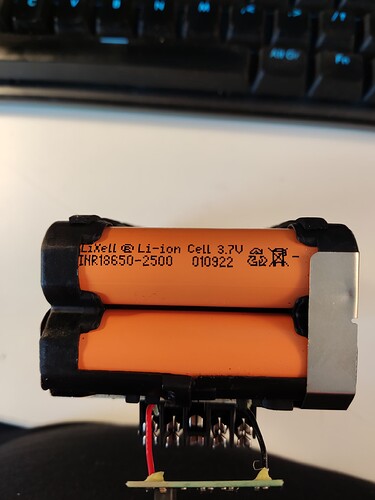 Unfortunately though, one of the nickel tabs looks to have been welded slightly crooked and soldered even more crooked, so it comes pre-shorted out on its neighbour for your convenience. It’s actually worse, it’s not shorted to the next cell in series which would kill just the shorted cell, it’s shorted the two battery negatives together. So the first tool to try and run it in 40V mode will short a whole 5S pack 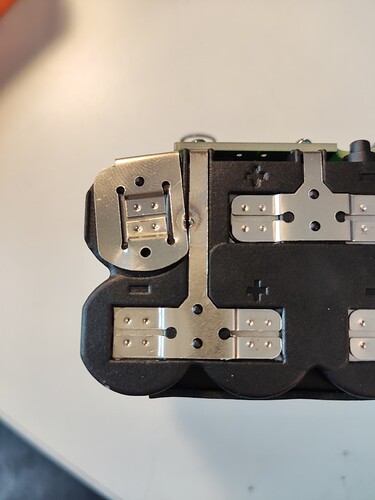 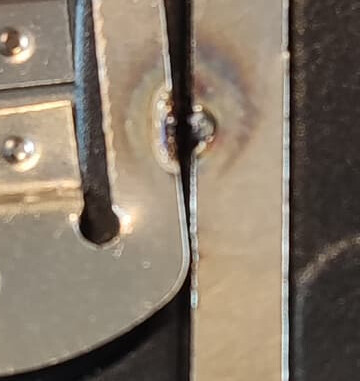 I just love the spot where a blob of solder has clearly already landed there, shorted out, then been either cleaned off or blasted off while the pack continues through production

This comment reminds me of Boltr/AvE’s commentary on tools

I’ve learned a lot from those vids, have you seen them?

yeah I’m a huge fan! Or I was until he started posting regular videos in support of the weird far right, antivax anti mask crowd

oh no, did he? Ugh, I don’t keep up I just remember from like 6-7 years ago some good breakdowns of complicated tools

YOU should become the next tool-breakdown-and-explainer-video-maker!

This is sold in your country?

Yup, brick and mortar shop in Ireland. Seems I’ve found where they cut corners for the price

…but I can’t find anything from the cell wrap so far, if you’ve come across them @Battery_Mooch let me know.

Haven’t seen them before.

Ok credit to the manufacturer, after 1-2 emails to confirm details they’re sending me a replacement with minimal fuss

Interesting turn of events - the replacement has arrived with different cells. They didn’t even bother to short this one out for me though, guess I’ll have to do it myself 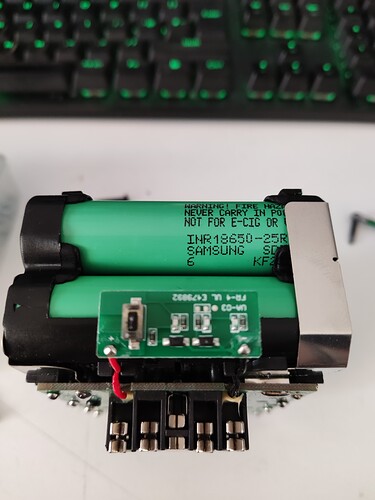 Currently checking how to (attempt to) check for forgeries, if anyone has any hints let me know. Samsung 25R this time though, and I can’t think of a reason they’d bother to use fakes when it’s very much not intended to be seen and isn’t advertised as a selling point. Although if the forgery is further up the chain and they got duped I can’t imagine they’d care too much unless the cells were a major source of returns

Small update: looks like the date code for all of them is March 2020, could be better could be worse. They’re all at 3.60 +/- the tolerance of my cheapo meter so hopefully they aren’t too upset at being woken from their nap

Currently checking how to (attempt to) check for forgeries, if anyone has any hints let me know.

Any checking would have to be done with the plastic wraps off of the cells.

There are codes printed on the can and the top one should have “25R” in the code. Other checks for Samsungs (any one of them, not 25R specific) are a character stamped into the bottom, near the outer edge, and characters stamped into the venting disk under the top contact structure.

The black top insulating ring must be free-floating too. If self-adhesive then you have fakes. Free-floating does not guarantee genuine though! Fakes can use them too.

Ah lovely, I was worried that’d be needed. Do you know if there’s any validity to the “shine a UV light on the wrap” test? I’m definitely keeping the Samsung pack intact so I think I’ll go for performance testing to see if they’re any good rather than trying to guess at legitimacy

Do you know if there’s any validity to the “shine a UV light on the wrap” test?

I’ve never even heard of that one. What does the light reveal (or not show)?

Looks to be a pet theory of one writer now that I look a bit further, they compared known good samsung cells to fake sony and the fakes don’t glow under a blacklight From that author: The 25R wrapper is not on tightly, as I took this picture after I had already deconstructed the battery somewhat.

Thanks! Interesting…time to get a UV flashlight (and good glasses?) and try this out. Though I would hesitate to use this as the only test as the counterfeiters will just switch to UV-glowing wraps once the word gets out.

Longer wavelength UV-A is (roughly, in general, asterisks etc) not harmful to humans unless it’s attached to a big power source. A is about 315~400nm but 400 is very close to visible so 400nm LEDs contain a good bit of visible light and aren’t super useful for detecting fluorescence because the signal to noise ratio of fluorescent light to just reflected blueish purple light isn’t great.

AFAIK getting a little generic UV flashlight with a wavelength around 365-395nm is the sweet spot of being useful while still being cheap, low power, and by extension safe. Stay miles away from anything advertised as sterilising though, UVC will give you a nasty sunburn quickfast and burn your eyes like a welding arc flash

Thanks! This one looks to be a decent compromise between price and power, 365nm…. 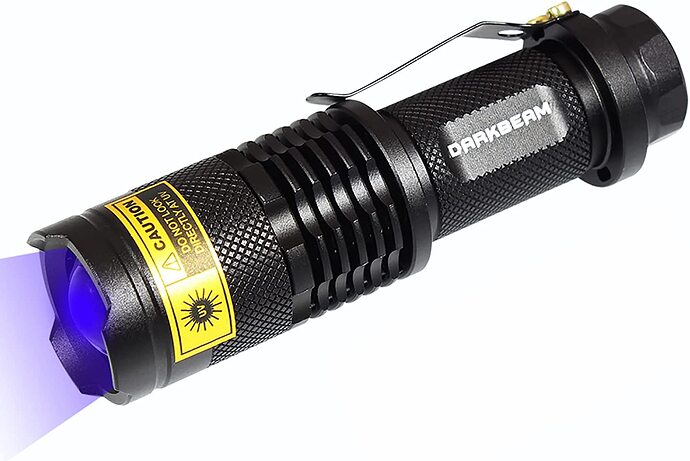