Setup Split PPM but with CAN for data?

Hi,
Is it possible to set up split ppm but have can enabled just for data?
Would it be a matter of the esc’s having id0 and id1 yet not enabling multiple vescs over can?
Has anyone done this?
Cheers

This is possible.
Just set PPM and put “Multiple VESC over CAN” on False on each VESC.

This should also work on a 3 VESC setup right? But I want two of them to be controlled over CAN and one on them from a separated receiver, while keeping CAN data

you can CANBUS between all 3, or 4

yeah, but my doubt is that if it’s the master VESC that has to have multiple VESCs over CAN disable or I can prevent each VESC from being controlled by the master

PPM connected to the master, I want it to also control the slave 1, but not the slave 2, while retaining CAN communication between all of them

It should work, just turn off can control for slave2

My plan so far was to use an Arduino to set the battery current to 0 on the slave 2, but this is easier

If one VESC on the bus has “Multiple VESC over CAN” it will send the command on the bus.
So not sure it won’t interfere with the PPM app.
To be tested.

Will try it in the future, if not I will ditch the CAN on the VESC that has to be controlled independently or just lower the battery current to 0

what if you set the slave 2 to can id:0, would it get ignored? and not interfere with the actual master vesc at can id:0

No, I will do a FlexiBMS that CAN wise is the same, should work without a problem

what if you set the slave 2 to can id:0, would it get ignored? and not interfere with the actual master vesc at can id:0

Wouldn’t this defeat the purpose of having the connected over CAN?

Wouldn’t this defeat the purpose of having the connected over CAN?

I’m getting tempted to test this… 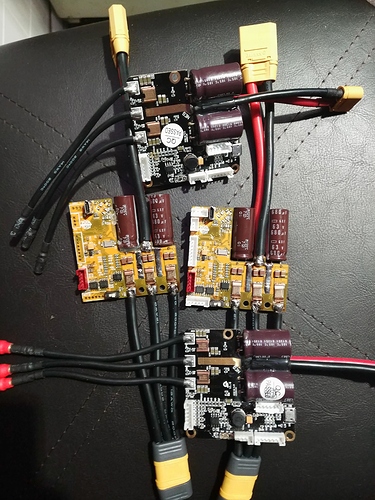 Sadly @BigBoyToys is no longer with us, the defacto canbus master

Its not recommended to have two nodes on the CAN bus advertise the same ID, because generally two cases can happen here:
Case 1: Both vescs send the same ID and Data field, in this case, CAN will consider it to be the same message, but can’t really tell which node the message originated from.
Case 2: Both messages have the same ID but different data fields, in this case if the messages are sent at different times, there will be no problem because of the arbitration rule, but if they are sent at the same time, then an error would occur because data is protected by a CRC, and the receiver will detect a mismatch and starts sending mismatch error frames.