You’re coming with me too bitch

I was ruminating on battery config on @bevilacqua GB thread but that’s no good for fleshing things out, here is better.

While I was threatening to get together a compression pack with cell level fusing I went through several iterations of some cell holders…all sucked for one reason or another. The total height to work with is just slightly over 20mm and width wise not much better. I was aware of @agniusm 2s4p packs which lend themselves very nicely if you leave off the cover and make a plane cut bringing it down to just under 17mm, the cells will sit proud of that by about 2mm but should be ok with a little protection on top maybe 1mm silicone sheet. You can see it here without the plane cut

I printed in ABS+ at 101% which wasn’t enough for my printer/filament so printing another version at 102% with the cut now. An order for cell tabs enough to build 12s4p is in now, less than €30 delivered with the WINTERSALE coupon, thanks dude 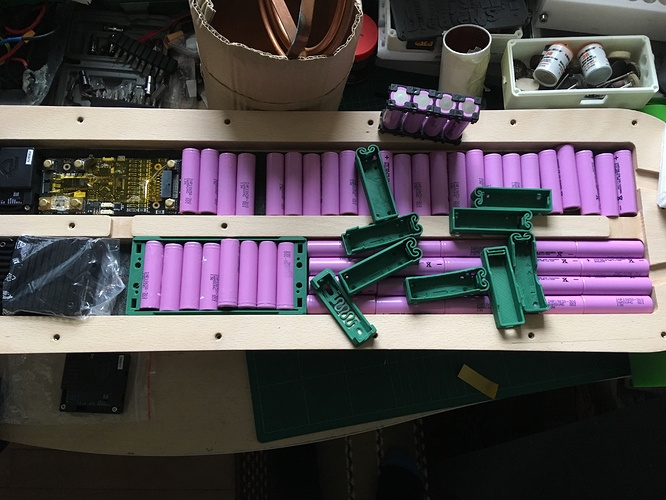 @agniusm: I have an idea for a module that could be cell height. Experimental and have no PC atm to mock up and see if its viable but the image in my head says it might be done.
Will post on NESE thread when I have some news

Without a lid there is another mm or 2 as you well know, but of course compromises strength. I used the vented version for obvious reason. It’s the bottom rails I’d like to move up I’m thinking there isn’t a huge pull one end to the other

It’s a heretical print in ABS for which I no doubt will take a lot of flak given no enclosure and no ventilation, normal room temp 19c, I opened a window later and will stay out 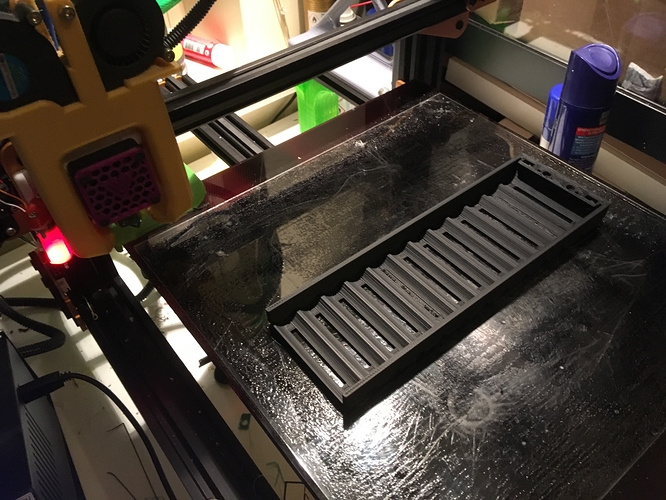 Decided that 13s is what I wanna do so DIEBIEMS will be used elsewhere a tiny charge only bms on the way. Finished printing the cell holders but need some time to build post-Christmas

Oh and she got christened

Spent some time today cutting individual pos tabs and soldering a fuse to them, ran out of time so absconded to Dingle for some dinner and a couple of drinks 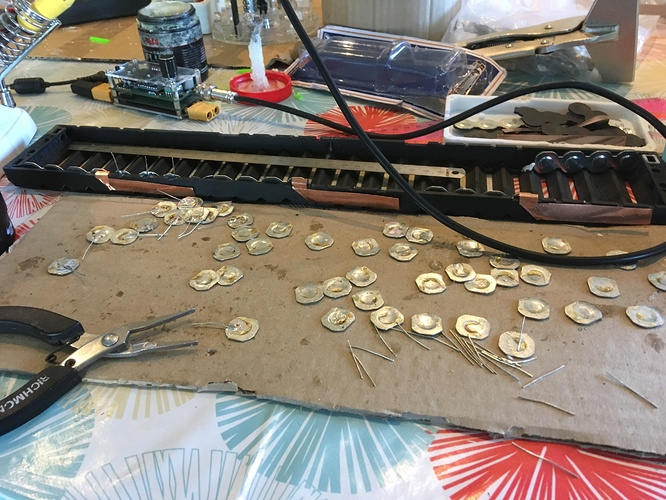 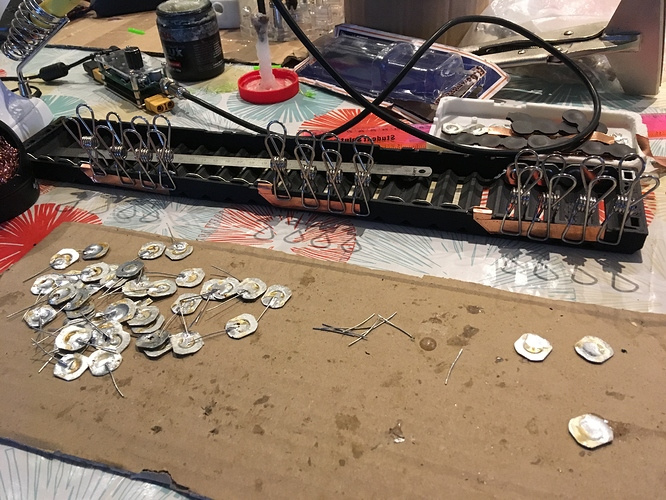 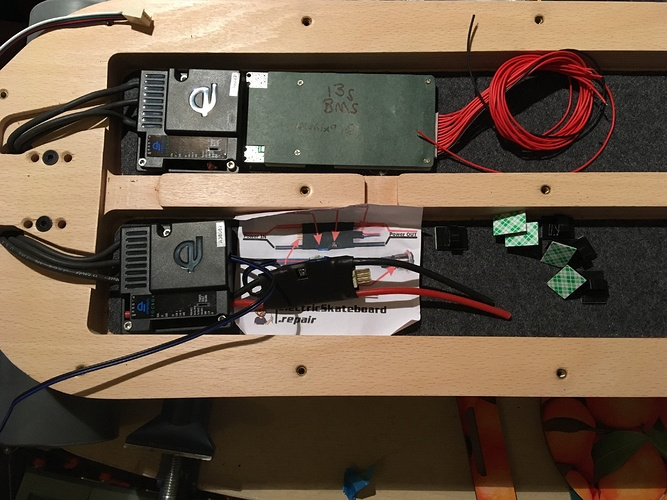 Oh and Gappy Nee Years to you all 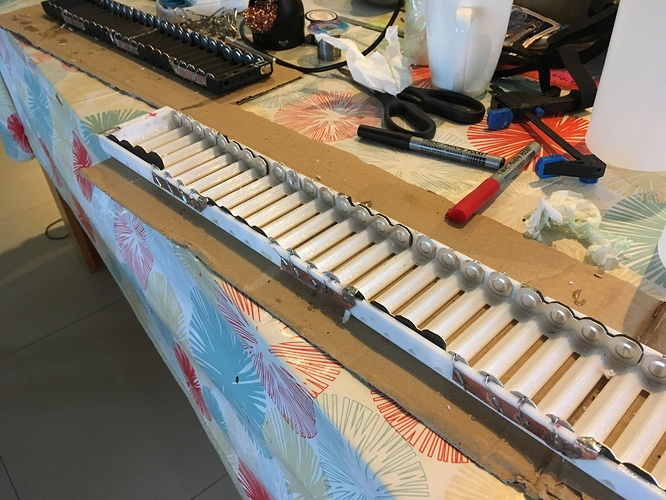 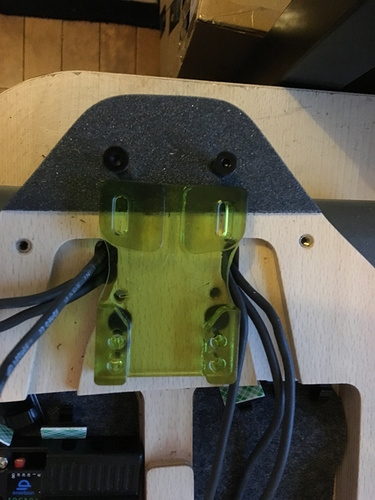 Phases to be sheathed 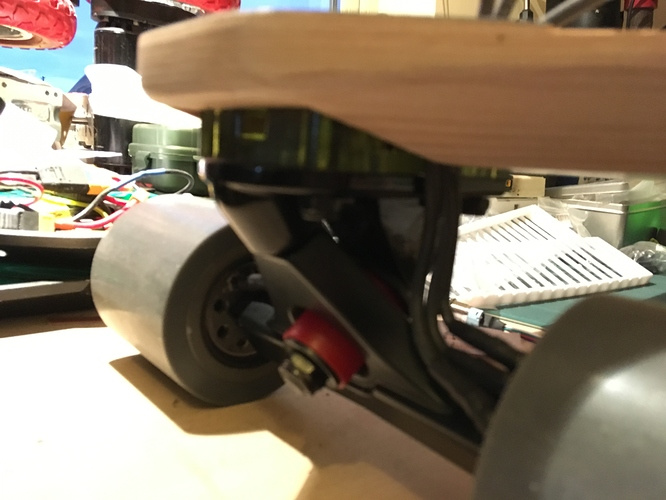 @hummie: Looks tight. Are u welding the cells or going to use those printed compressors? Anyone ever use those ?

Main thread here, @agniusm did some rock solid testing, they have a copper core and button shape

Guys has anyone tried these ? Seems like finally someone got the solder less packs sorted out the right way. I am super tempted to try these with 12s4p setup. Link to the store: http://18650.lt/index.php/product/n-e-s-e-module/

On the rear is a 1/2" tunnel riser made by Riptide, I picked up a couple in a GB.
On the front Khiro Angled shockpad, 80A

@hummie: What about those purely printed green holders w a printed spring, anyone use those?

I ended giving up on those, the effort to cell-fuse them I failed with, it ended up being easier to use NESE tab I had left over, and just bridge together a really long tray

Atlas make these precision washers, the raw steel one boardside is a hat-shaped washer on a 93A riptide cannon which should remove a little slop. Going to move inwards a notch. 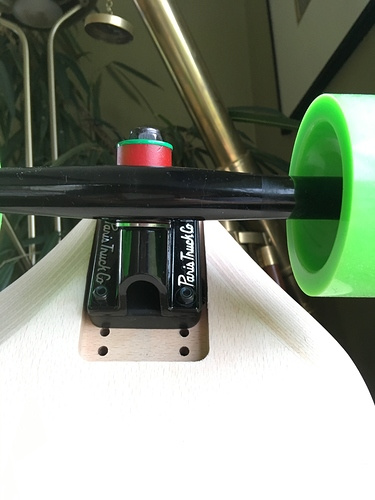 These guys are great for reducing slop in your Torqueboards 218 trucks... getting closer to that precision truck feel, increasing stability and maneuverability. I don't know if they are sized exactly for Caliber trucks, but give it a try: it's a 5...

Test fit of the cell trays, need to file down the soldered fuses in some places and glue tabs into place, also solder in some charge leads, with a little more work I should be able to get this done then heat shrink each tray and cut holes for the cells to pop in/out 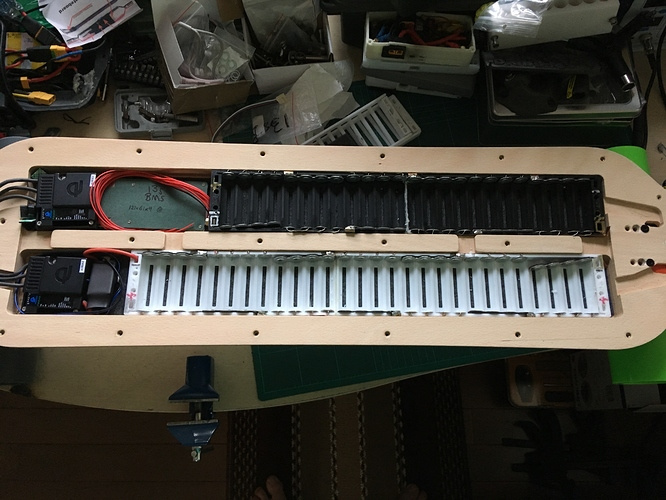 Test fit, still some work to do on her hair, I mean the balance leads, I used @Brenternet’s hair dryer to get the vacuum on the shrink wrap 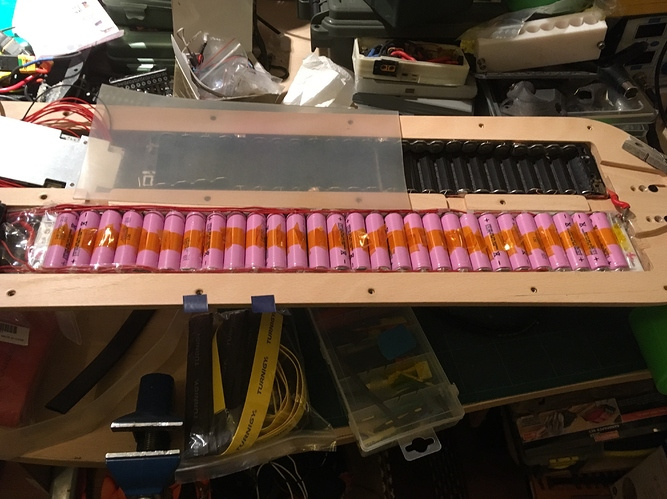 Some ankle protection and a pair of tights 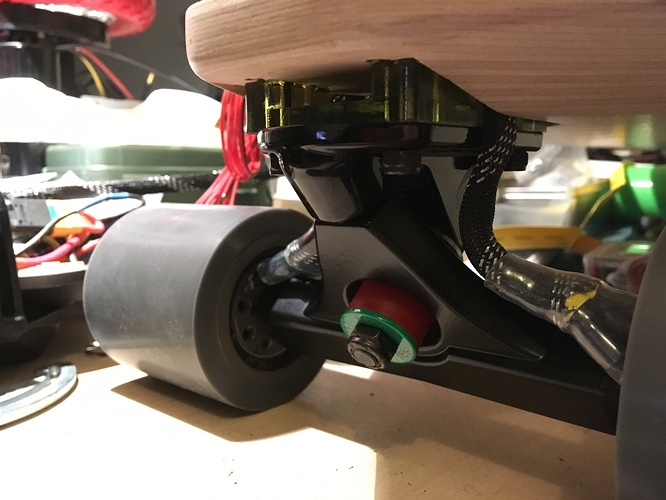 @hummie: When u do finally get it going I highly recommend the foc program w 30khz switching. Probably said it

Lately foc and that higher frequency’s efficiency has been questioned on this site and people are testing (maybe u) but it’s still the smoothest and most silent.

The yellow shrink showing through was too annoying so fixed it 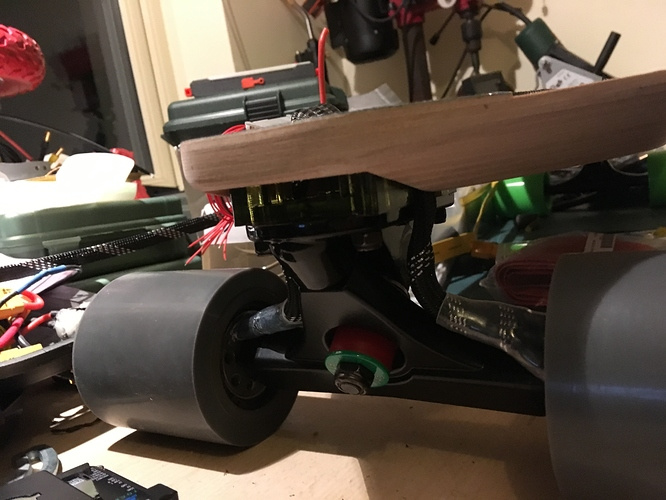 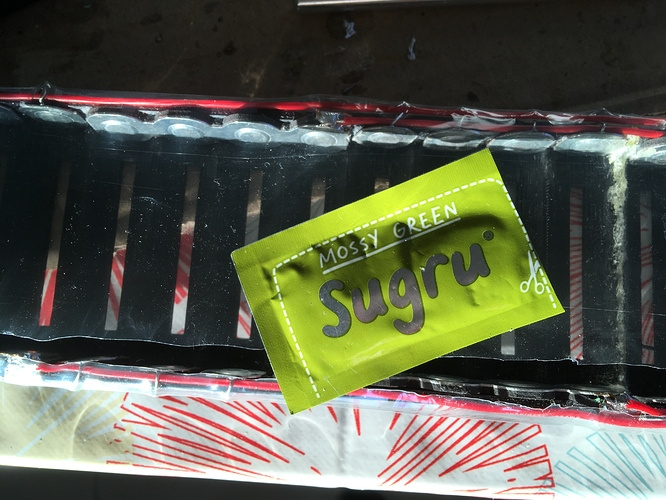 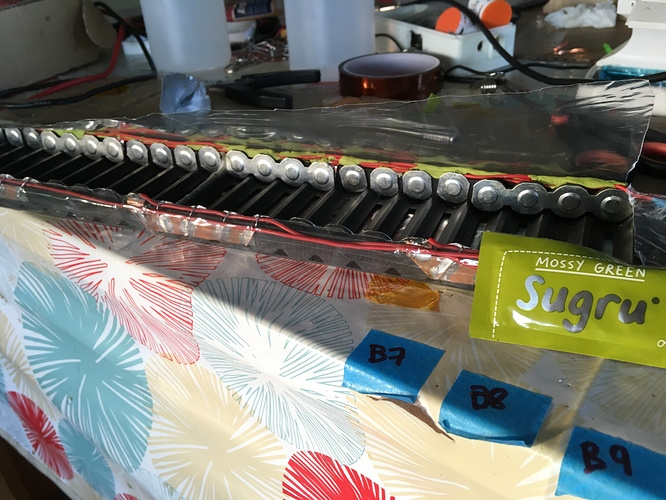 The balance wires are a concern, grounding any of them out against the aluminum deck would be a disaster.
My solution was to sugru them into position 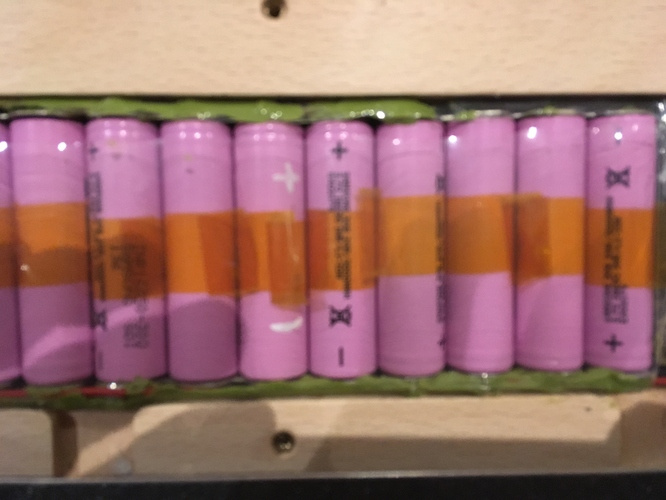 Then just on top of the cells a 1.5mm silicone layer, kind of like this 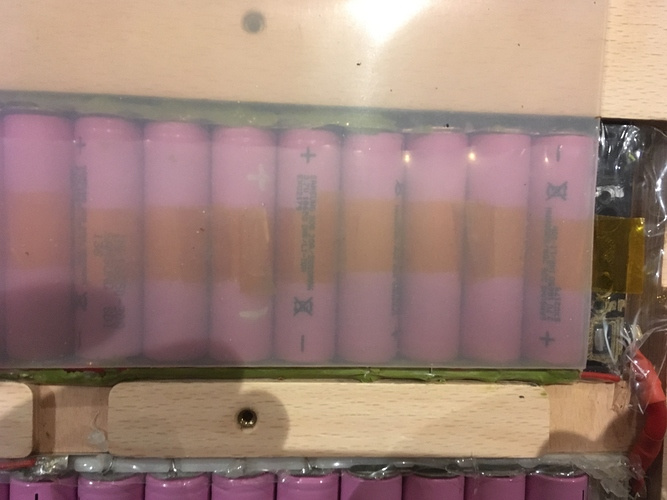 I surrendered to the Kama 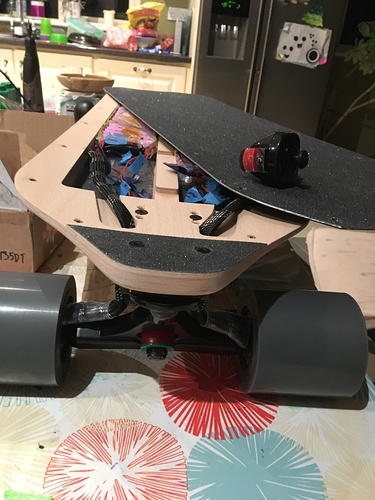 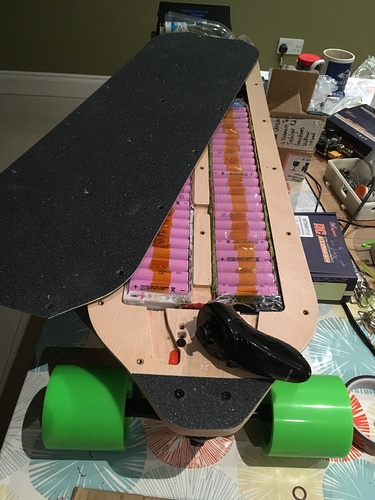 Still not happy with the clearance although I did not test with the special thin NESE cell packs on the NESE thread, I don’t really want to backstep into printing trays again and refitting the hardware so considering taking up yoga 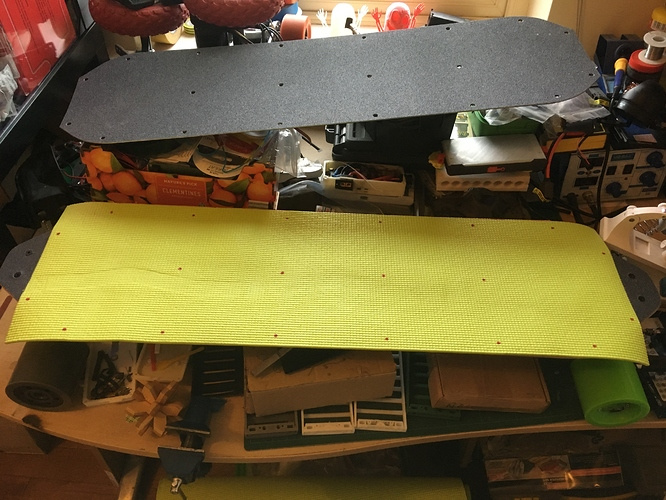 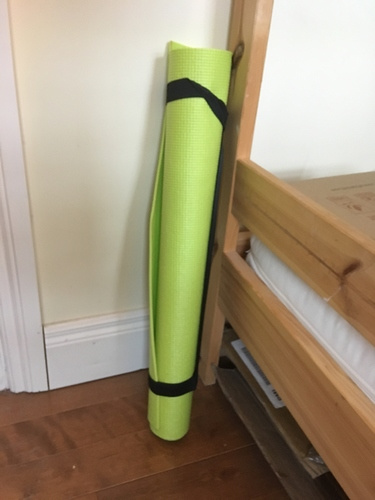 Going to open it up more like a gasket 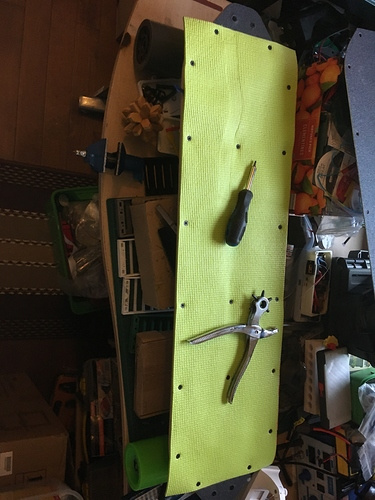 @hummie: Everyone does it differently but I’d skip the kapton tape between all the cells facing the same way and instead put a complete wrapping or maybe something more abrasion resistant between the groups of four cells. The ends of the cell especially. If the four facing the same way break through the sleeve and touch it’s no problem but if different groups of four were to contact then likely a fire.
You know.

Rodger that, good advice some fish paper is in the works for that under the yoga mat

The tape in that pic is just to easily pull cells 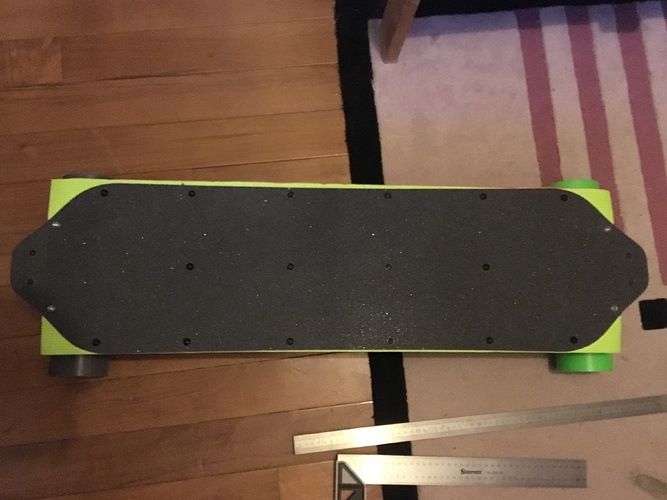 Stand on it and wiggle about a bit to get an imprint without making any template, then trim 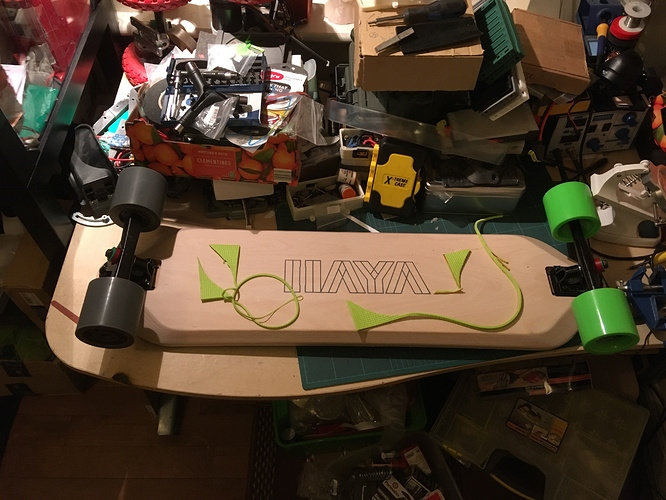 Stop it, I’m such a mess