Prototype #4: Finally something half decent

It’s taken quite some time (going from a cheap dual hub motors set to mountainboard trucks to using a VESC) but I’ve finally reached a version that fits my requirements. Already making notes of things I want to do different for the next version (printed (sectioned) enclosure instead of single fibreglass mold, thicker board with less flex), but I think I can have some fun riding this during spring and summer. 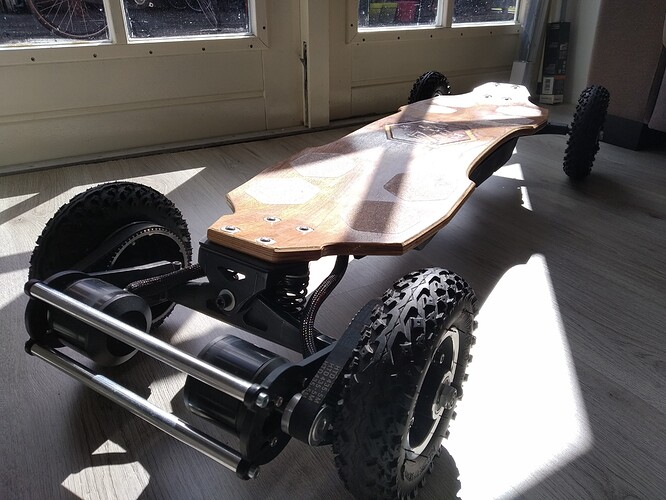 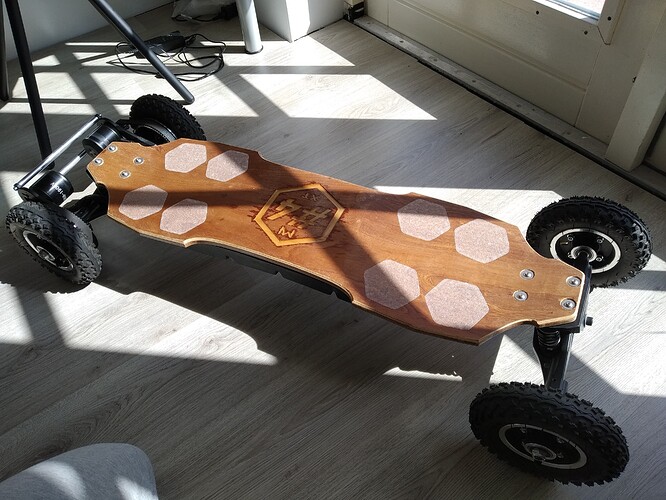 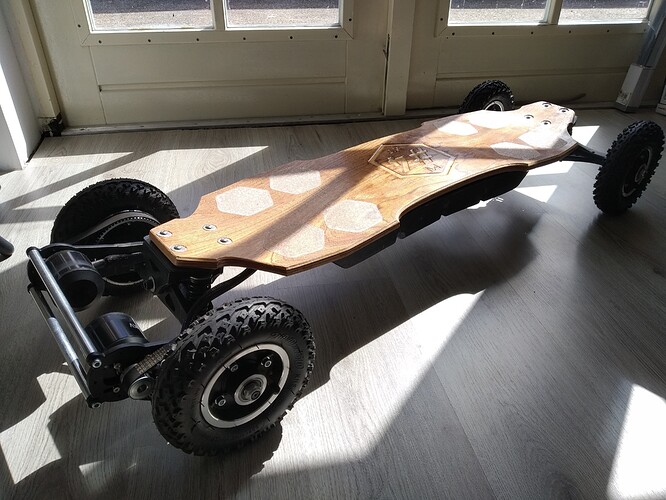 Dope deck bro! Love the kaly type shape. How did you make it?

Looks like we have a woodworker here! The chamfered router edge looks really clean.

What makes you want to go with a sectioned enclosure instead of one big boy?

How does that set up turn? Traditionally MTB trucks need an angle of 30ish degrees, I see you have then at what looks like 0?

Thanks! Yeah, the design was shamelessly inspired by the Kaly deck. The curving of the deck is a lot rounder and less pronounced because it’s just layers of ply, but I think that gives it its own personality. As for how it was designed, my CNC takes most of the credit honestly. 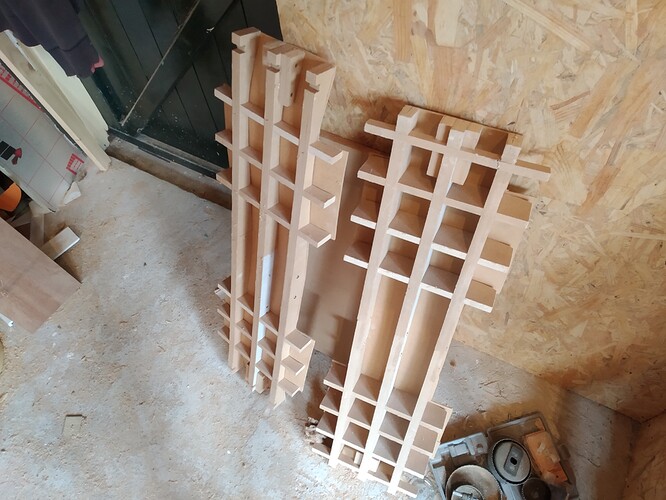 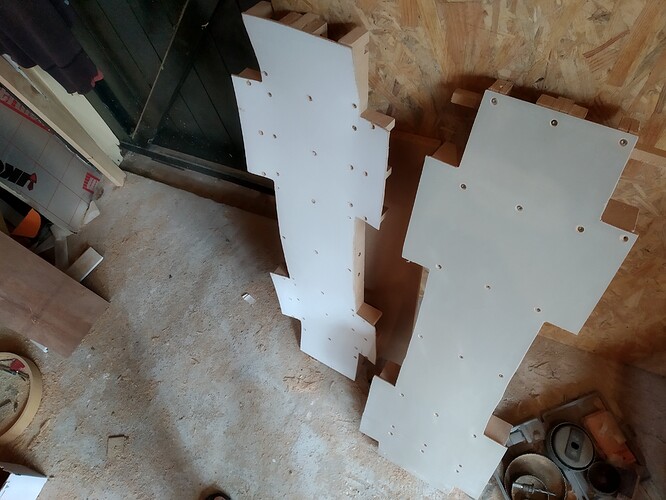 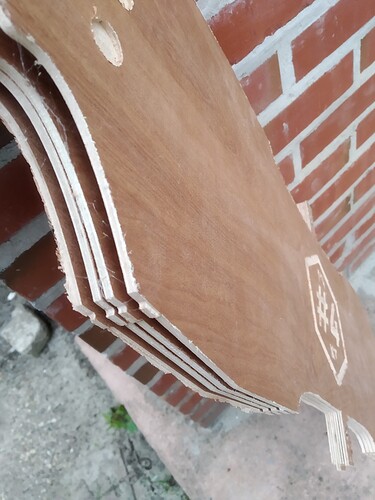 Everything was glued up with layers of fibreglass in between 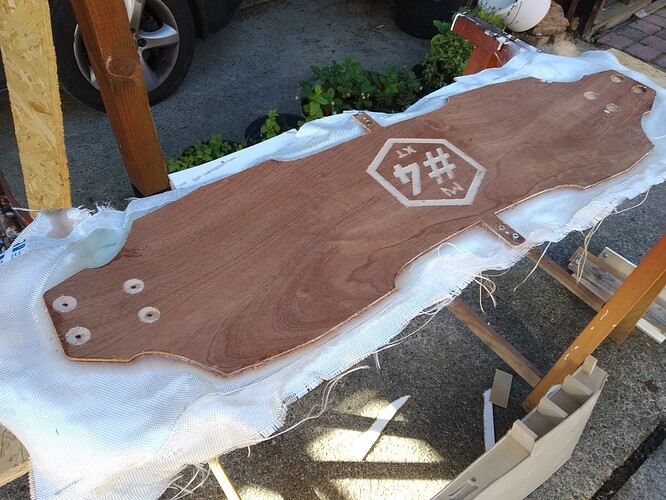 And finally clamped into the press for at least 24 hours 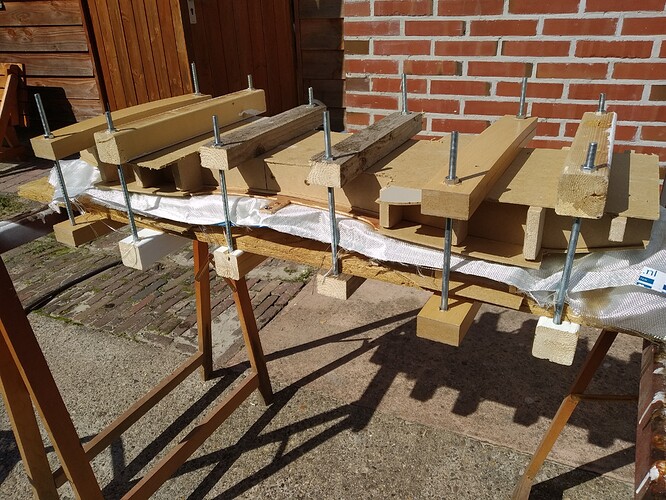 As Venom mentions the clean up was done with a router

Thanks! Yeah, I really like the chamfer compared to rounded over corners. I think, given the amount of flex in this design (and me being a wuss) there’s a decent chance of cracking the enclosure.

I’d feel more at peace if it was split down the middle to reduce the amount of force. Although I do want to make a new deck with less flex, so maybe keeping it in one piece will end up being fine.

As @Skyart mentioned, how do you find the turning? I had a 15° tipped deck with mtb trucks and found it turned pretty poorly.

I think the images kind of hide the angle, but it is a lot shallower than 30 degrees, closer to like 10-15. I haven’t had a chance to do any decent test drives (weather has been crap around here).

Prototype #3 had 0 angle and turning was ok but not great, so I expect it will at least be better.

For the next version of the board I want to see if I can push the angle a little further in the press, but I doubt I’ll get more than 5-10 degrees extra (before the wood will just snap)

Awesome work, thats the kind of build details we love to see here

Been thinking about it for a bit, and I should be able to get better bends with thinner layers of ply… Worth a bit of experimentation.

The main problem I had with that is that anything thinner than 3mm is very hard to get here (and insanely expensive; like 70 euros for a 0.6mm thick, 1000mm x 1000mm sheet, of which I would need at least three to four to get the right thickness).

But I just realized I could take some relatively cheap beech plywood and plane it down to thinner sheets.

The other option for a better angle would be to make the ends as loose inserts that get fiberglassed in with the rest, but that might not be sturdy enough? Could glue in some aluminium flat stock I suppose.

And thanks for the feedback @Venom121212 , @Creavenger , @Skyart ; it will definitely help with the next version

Awesome work with the deck!

Which wood did you use and how it turned out regarding the flex? Did you use epoxy resin to glue the layers with the fiberglass?

Also curious about which CNC machine you have.

Sorry for the train of questions

Thanks! No problem, love to share;
To be honest I’m not sure what type of plywood it is; I found some off-cuts at a local place that had a nice grain pattern. In terms of flex it does seem to behave very similar to the 3mm birch plywood I have.
I don’t have a lot of experience with other decks (my background is mostly snowboarding), so bare with me

It definitely does not feel as springy as my snowboard, but it’s not a rigid plank either, so I guess somewhere in the middle in terms of flex?
Ah, I didn’t mention the construction properly earlier; yes it’s a laminate of epoxy resin with fiberglass, finished with a few coats of PU lacquer. Basically just spread epoxy with a roller on two boards and sandwich the fiberglass in between, then rinse and repeat. In this case it’s four layers in total for a thickness of around 15mm.
My CNC is essentially a workbee. However, the plans for this machine are freely available, so I sourced the parts myself instead of buying the kit. It’s a very doable hobby project and a lot cheaper (like 500 euros total instead of 1500+). That said, I am running into the limits of the machine (accuracy is around 0.5mm, which is a bit too much for some of the stuff I use it for) so I’ll likely build my own next year or so. It definitely opens up a lot of options, I even used it to machine the cell holders for the battery pack in this board. 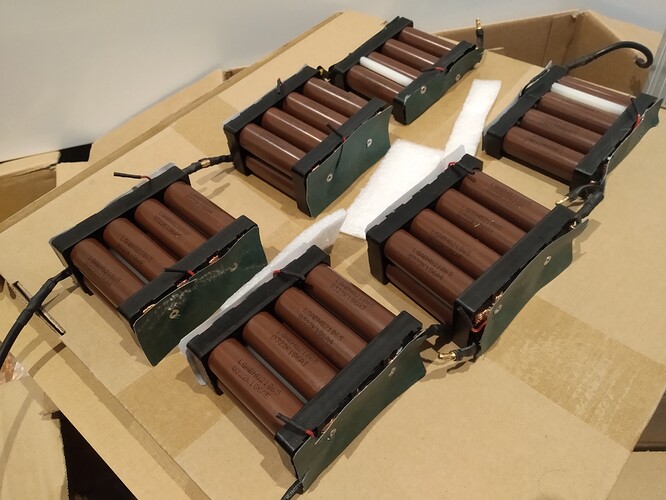 Can you turn on that thing?

I was able to do a real test run yesterday evening; it seems to turn well enough for cruising down the road.

I want to see the smallest turning circle you can manage, you can do a rail grab.

Rail grab? Oh crap, now I’ll have to learn how to board properly

I just remembered that the trucks came with angled spacers 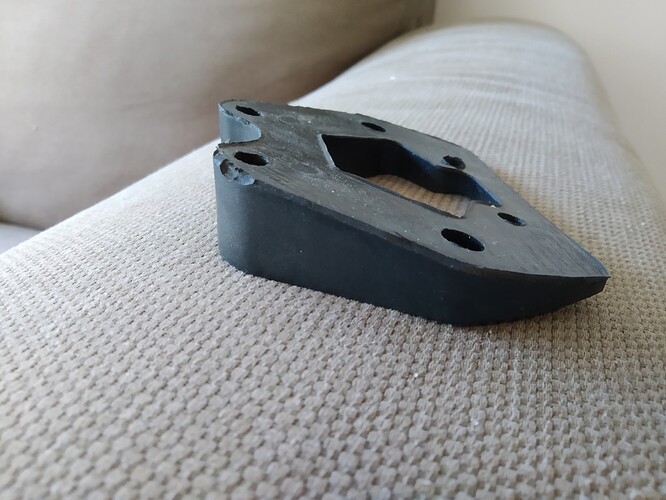 These should get the angle up quite a bit until the next iteration of the deck. And it might be interesting comparing the performance with and without them.

Hey man, respect. This is some really nice craftsmanship. Love the lines and curves. You might even consider a version with lower tip angles for a street deck. As it stands, some adjustable baseplates are probably in order.

What’s the plan? Will there be Prototypes #5+?

Other questions:
What’s that bleed around the central design?
What’s the concave look like under the footpads?

nice work. accuracy of ± .5mm? can you share some detailed photos of your machine

Yeah, the plan is to ride around on it a bit to see what I like & don’t like. And then it’s on to #5. One thing I’m still not sure on is changing the angles of the truck mounts. On one hand, if the spacer blocks work well that would be easier, on the other hand getting the wood in a steeper angle is an interesting challenge… Or maybe adjustable base plates like you mentioned.

The concave is about three mm from center to edge. I wasn’t sure how it would feel, but I’m thinking about making it more pronounced for the next version. 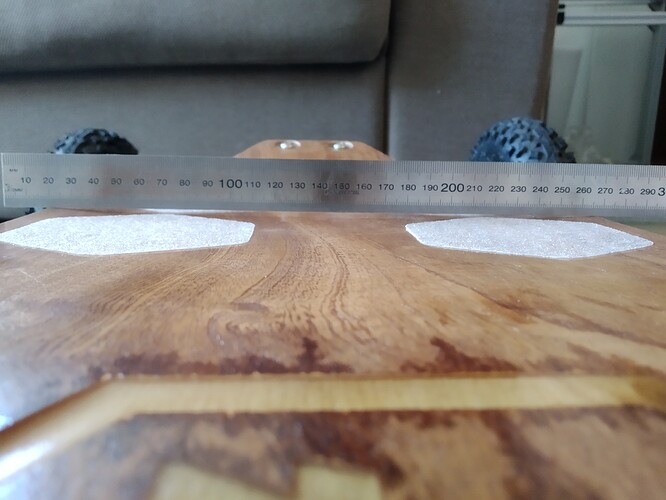