So I just watched a video of a guy who built his own onewheel and at some point he installed the lean sensor and pressure plates.
That reminded me for a board I came across a few years ago, that was built in VERY limited numbers and was intended to be an electric surfskate.
Besides looking kinda cool, the main difference was that one used weight distribution to control the speed rather than a remote.

Now I really, REALLY like this idea: It would work a bit opposite to the pressure plate / lean sensor of the onewheel, namely that it accelerates/brakes depending on the difference in weight on either truck, adjusted by the lean sensor when going up/downhill. No pressure on either trucks means the motors go to standstill.
So you step on the board, you put pressure on the front trucks and the board starts accelerating. You move your weight on your back foot and the board brakes. No remote needed and yet you can control your speed, unlike the ideas I have seen that maintain a given speed when not pushing.

What do you think about that idea? Obviously there are some potential issues (first of all how to get on and off the board, but this could maybe be solved with some “special commands” in weight distribution).

(yeah, I am also throwing this out there, hoping to inspire someone to actually build something like that because I would love to have such a thing but there is no way I could pull off building it)

@Flyboy is doing this

I had/have a zboard 2. It nearly broke my wrist once, and bruised my ass by suddenly accelerating while I was going at 0.5mph up a tiny hill. Pressure sensitive plates are highly inaccurate. I converted it to use a vesc and it’s great now.

I feel like this is really dangerous as in esk you play a lot with body weight when accelerating and braking, I also take small jumps when I go through bumps that may cause instability on the speed

Thanks! Exactly what I was looking for - interesting to see the route he took though, I would have considered custom pressure sensors between the trucks and the board!

Yeah going uphill/downhill WOULD be an issue - I am hoping this can be resolved with a lean sensor though.
There certainly are advantages and disadvantages to the system for sure though!

The point is: If you accelerate by pushing forward on the remote, you lean forward anyway, if you brake, you lean back.
That means, if the board accelerates to fast, it pushes your center of gravity to the back, which means the board will slow down.
I think if you had some sort of latency and averaging over, say, a second or so, you could avoid sudden jolts - that comes at the cost of precision though…

But please bear in mind: I am not an engineer and I have ZERO actual experience building stuff, so this whole thing might be a really, REALLY bad idea that just seems cool to a layman like me.

It’s a good idea on paper, but only on paper…
The reality of real life conditions mean that your pressure sensor will be triggered whenever you hit a speed bump, a stone, a pothole, small curb, blind strips, or when you deweight to deal with those kind of urban obstacles. Pressure also changes during turns. Having the speed changing because of that is a guaranteed recipe for trouble.

Same kind of ideas flourish on the efoil world, and it’s equally bad… Unless you restrict your playground to mirror like surfaces.

It’s been tried by a bunch of “esk8” brands, with predictably terrible outcomes.

@Andy089 I’m still in the development phase but here’s what I’ve experienced so far:

When you said to put a pressure plate between the trucks and deck, if you meant a force-sensing resistor, please be aware that the response curve on those is terrible and you shouldn’t use them. They’re also probably not rated for vibrations and shocks and all the other real-world stuff. The other option would be to mount the trucks on a load cell, but that would increase the length of the load path and therefore reduce the rigidity of the structure. I didn’t want to do that, so I went with an option that mounts directly to my structure instead of changing it.
Everything I said so far is moot if you build a board with weak acceleration and a low speed limit. Set a high ramping time, and you will just have a really chill cruiser.

@Flyboy
If that board is fully charged, and next to seven other fully-charged LEVs of all shapes and sizes, a funwheel, a shortboard, a longboard, an emtb (e-mountainboard), and an emtb (e-mountainbike), then which one are you going to grab on the way out the door?

Just to clarify, I’m not claiming that this is superior to a remote as a control method. It is obviously way more of a hassle to set up and has more failure points. Despite how cool it feels, I don’t recommend that other people build this kind of system just for kicks, at least not on high power boards.

I do this because I can’t use a remote, because I deal with repetitive motion injury in my arms. I’m going to grab the board that I’m medically capable of operating for more than 10 minutes.

I’m sorry, I was unaware. Makes a lot of sense.

No worries. It’s reasonable to be skeptical without that context lol.

I wasn’t skeptical, I just wanted to know which one was more enjoyable

I don’t know, I have no basis of comparison. This is my first esk8.

All I know is that skateboard go zoooom. 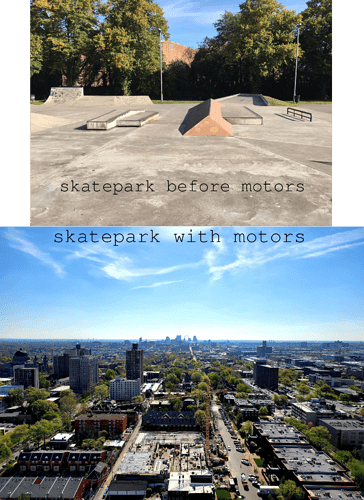