Hi!
I’m making a list with boards I’d recommend to people at different price points, mainly because I’m interested in keeping tabs on what boards give you good bang for your buck.

Are there any obvious options you feel are missing on my list so far? 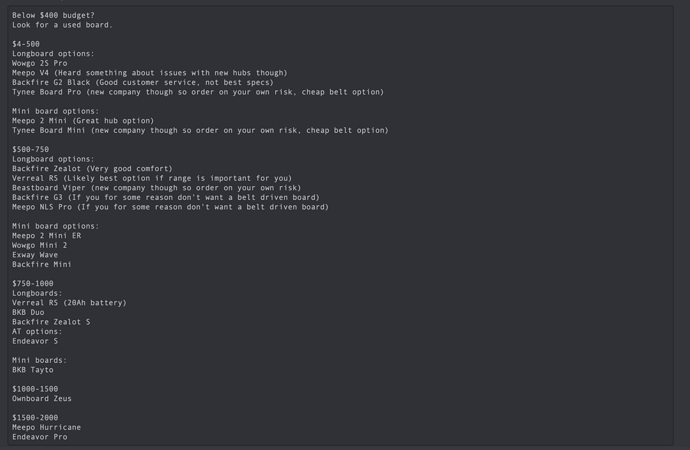 Maybe the Beast Apache? Haven’t tested it but it looks good for $999

Would be interesting to hear your thoughts on the Demon 2.0…

I would honestly broaden the list to just lists of manufacturers, as there’s simply a ton of decent choices out there with significant overlap, and the boards all feel different, which is subjective. Wowgo’s case for instance, you’ve got the 2S Pro for entry level, 3/3X for a “as close to Boosted as you can get” board, Mini for a short board, and AT2 for AT, which was one of the top recommended AT boards for some time on Reddit (still good, just competition has caught up). Meanwhile I’ve tried out most of Backfire’s boards, and I’m not a huge fan of their decks (too flat in middle with sharply curved wings, springy stiff with not much dampening). They’re good boards, but not the one for me, and I’d only recommend them if that sort of feel is what they want, or if they don’t care about that as much.

not anymore, I disagree. My buddy is an exway ambassador and he’s about to quit as they’ve gone downhill. One look into the exway owners Facebook group and you’d see that exway is ignoring emails and not servicing boards that are under warranty. The atlas is an absolute shitshow with things constantly breaking and batteries going bad.

Majority of the members in our local fb group own exway. The local distributor does excellent servicing and addresses issues right away. It was so good to the point that there exists subtle level of bullshite elitism among some of those who can afford the prebuilt board while we plebs can only diy. Now I know why they’ve been silent lately.

New to the forum, and looking to buy my first e-skate…but, can’t afford to spend too much. After a good amount of research, I’ve narrowed my choices to the Backfire G2 Black, and Wowgo S2 Pro…with the Meepo V4 being a “distant third” option. In searching out comparisons, I haven’t been able to find any pitting these two boards against each other. Suggestion? Recommendation? Any input would be appreciated.

the meepo v4 is the newest and has the best motors and esc out of the bunch, but the deck is… weird. Are you tall and/or heavy? If yes, avoid the meepo. It’s small. The concave of the deck is also weird, but your feet stay planted AF.

The backfire probably has the most comfortable deck. Otherwise it’s a tossup between the two of those.

How much are you looking to spend?

despite all my nagging to let me do a DIY for him, my roommate is insistent on a prebuilt.

he’s only ever rode (and liked) my shitty evolve GTR bamboo with a loaded dervish Sama.

My requirements for him to ride with me are:

anyone able to suggest stuff? I’ve been trying to get him into the idea of spending on an Apex Predator, Kaly or Trampa but he complains about the price on those. I don’t want to just point him at an evolve clone like the Zeus, Hammer or Hurricane, he deserves better than those.

not particularly possible on prebuilts

not particularly possible on prebuilts

isn’t there something that’s at least VESC-based? or uses mostly off-the-shelf parts?

boundmotor flash. Pretty sure you can message them and order it with a 12s4p p42a with a 100a bms. Comes with a makerx DV6.

that’s a pretty good idea, only real downside is that carbon fibre decks have zero give and transmit 100% of vibrations into your shocks [knees]

i feel like im stuck in 2019, loving extremely flexy decks and rkp

First, to answer PropulsionBoards question, less than $500 (not including tax, shipping, or extended warranty (if available)). Remember, this will be my first e-skate. While it would definitely be ‘nice’ to have something better, it’s about the most I can afford for now. That being said, if I discover I really enjoy it, I will save up for something better in the $700-1,000 range.

Getting to Evwan’s comments/questions, I know the V4 is the most recently released…but, as for the ESC, I can neither confirm, nor deny, it is “the best”, as it’s from a company I’ve never heard of. As for Hobbywing (the brand that’s in the other two skates), being that I’m also involved in RC, it’s a brand I not only know extremely well, but is a brand that countless people around the world know, and trust. In the works of RC racing, it is considered to be one of the best, and it’s probably used many times more than any other brand. Speaking of the V4, when you say the deck is “weird”, what do you mean? A quick side-note/question - you didn’t say anything about the Wowgo S2 Pro…why? Considering many, many others have indicated (in their typed, as well as YouTube, reviews) they think of it as one of the best (a few even said “the best”) ‘budget’ options, it surprises me you didn’t mention it

As for height & weight, I’m 5’8", and approx 230lbs. Yes, I know that’s, medically speaking, considered ‘overweight’, but I am working towards getting that back down (was 235lbs before I went to work for Amazon, and 175 when I left just less than 2yrs later…and, since becoming a Professional Chauffeur 7yrs ago, I put back on most of the weight I had potentially lost. My ‘goal’ is to get back down to approx 200lbs…slightly less would be even better.

The tricky thing is hub motor boards will unfortunately struggle with anyone over 200lb. Even with me being 200lb I can easily overheat hub motors without going fast. For learning, any one of the two hobbywing boards will work but you’ll likely outgrow them very quickly.

In terms of the ESCs, I believe lingyi was making esk8 escs before hobbywing, and the new ones in the meepo v4/hurricane are really good. They’re smoother than the hobbywing escs and more powerful, but the v4 is probably not for you.