Guys, take a survey.
On a skateboard, people are more likely to choose between one dual-drive controller or two single-drive controllers.
What’s a better one side current?

Depends on which ones they are and how you wire them. I’ve had multiple bad experiences recently using a pair of Trampa MKIVs with that momentary button wiring they support.

in my opinion, its more reliable to run two singles on an e-switch or a loop key, with loop key being most reliable.

building is easier with duals though. BKB Zenith / unity is dead simple. Trampa HD60 has some button wiring to do but its also easier than duals with that funny button wiring or an e-switch. Stormcore is just as easy but it’s fat. Spintend UBOX is fatter but there’s no external receiver (if you get the integrated one) so you don’t need room for it. Fat ones make you arrange things funny in single stack enclosures sometimes but in big boards they’re gold.

but two singles over CAN and an eswitch are usually my go-to for more powerful builds. When you use that trampa button wiring trick and the ESC fails or error codes it will fail in a way that requires you to open the enclosure to resolve. With an eswitch or loop key you can just reset it and roll again.

When you use that trampa button wiring trick

What is the trick?

you can use a single Normally Closed momentary LED pushbutton to turn on and off one or more of the trampa VESCs via their built in mosfet switches. this is for the HD60 but you can do it with the singles as well. 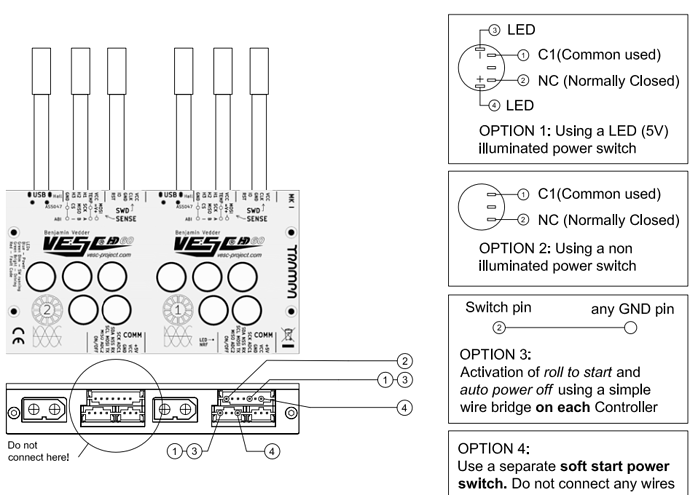 but two singles over CAN and an eswitch are usually my go-to for more powerful builds.

You have an eswitch to recommend ?

You have an eswitch to recommend ?

They have no built in mosfet switches. They can hibernate. If only one turns on, simply spin a wheel on the other one, and then both are on. No need to open anything.

They have no built in mosfet switches.

when one is locked up in an error code and won’t turn off the button is useless and only turns the side on and off that isn’t malfunctioning. Then you have to disconnect the power. spinning the wheel doesn’t turn them off. In that situation it does nothing.

well… unless you’re in discharge bypass… then it will just drop cell voltages to replacement values.

If those single units are foxboxes then yes, if not unity/stormcore all day long.

In that case there is an issue that needs resolving. Either the HW is damaged or something else is not quite right.

It’s some hacked together SR latch circuit made from diodes that disables the logic supply rails by disabling the buck converter.

Seems it works well enough, but it also means the power stage is fully energized with nothing asserting MOSFET pull down. This works fine for something like a power drill where everything in the system is well controlled. However, if something capacitively couples into the MOSFET gates, well…

Oh, and you still have to deal with the atrocious boot time.

Apparently the watchdog is enabled in vesc firmware, so it’s unlikely one will completely lock up to commands except in rare cases where main threads starve.

VESCs via their built in mosfet switches.

To build it, in practice, what is the maximum speed of the skateboard in Km/h?
Have you tested how much A the drive motor reaches at the maximum speed?
For better construction and selection of more stable drives.