I have two prebuilt battery packs, both with a built in (charge only) BMS with (separate charging ports) and the discharge ports wired in parallel to the ESC. I would assume over time that the cells will become unbalanced due to the way they are connected. Should I use a diode on each positive lead to prevent balancing from the discharge port of the pack?

I think you are overthinking it. If each pack has its own bms and the two are in parallel, the two should remain in perfect balance no?

If you introduce a diode, you would be allowing the packs to drift…

I assume that aswell but this isn’t a perfect world. I brought this up because I had one pack plugged in to charge and left it on there longer than I should have. I unplugged the first one to charge the other; but the other pack also got charged through the parallel connection. My assumption is that over time one will become unbalanced due to being charged through the discharge connection.

Maybe I should add a switch to switch between packs?

Surly if the packs are wired up to charge only BMS then the packs are commend out to each other so you infact bulk charging both packs simultaneously when using either of the charge port just not activating the balance circuitry in the other pack. This is dangerous because the hole pack will be = voltage to each other any drift in cells will result in some been over charged

Edit: presuming the 2 packs are in parallel

That is what I was assuming and what I dont want to happen. Which is why I need advice on a diode to use so current flows one way and not the other. Which would be easier and cleaner than wiring up a switch to toggle each pack.

That would stop the brakes regen of the VESC and proberbly cause issues with the ESC as it can no longer use the battry as a energy dump.

The packs are already split for charging. Each has its own charge port. Just the discharge port is wired in parallel. I can see the regen being an issue maybe?. It has a HW esc not the VESC. I dont think it creates enough energy to make a difference.

Also each pack is on a pcb, with the bms and cells soldered to it. Like the evolve’s battery.

I dont think it creates enough energy to make a difference.

Why bother charging the ports separately? BMS usually start balancing at a particular voltage regardless of whether it is charging through its circuit or not. You could leave both connected in parallel and just charge through one, both packs will be balanced each time.

I used 2 charge ports because I had them. I know I can have the charge ports in parallel. What I’m referring to is when 1 battery pack gets lower than the other, the lower battery will get charged from the higher volt battery through the discharge side. Due to them being connected with a parallel connection.

What i meant was, if the packs are in a parallel connection, it’s impossible for one pack to have a lower voltage than the other

BMS usually start balancing at a particular voltage regardless of whether it is charging through its circuit or not.

Most need to be activated and don’t balance on discharge If 1 charger is been used this will not activate the other BMS bss as balancing.

If 2 chargers are used this will confuse the cc part of the charge as both will see the voltage from the other charger and keep upping it.

switch between the two positive

As fare as I know it should work but remember both packs need to be the same voltage before reconnecting or 1 will try to charge the other very very quickly. And it’s going to need to be a very beefy switch 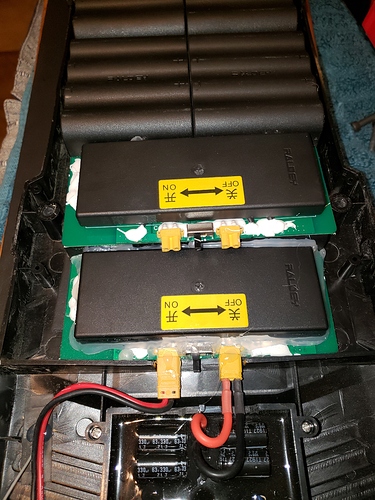 What I originally was doing is option 2.
I have 2 packs, each has their own charge port because each has a built in bms and the discharge ports were wired in parallel to the esc.

Most need to be activated and don’t balance on discharge If 1 charger is been used this will not activate the other BMS bss as balancing.

Really? I was told different by Bestech. That balancing starts once a certain voltage is reached, as it is a different circuit than high/low v cut from the fets

I was told by APS who use best tech that if no voltage was applied across the charge port then the balancing is not activated.

Would it not be a active balancing BMS otherwise. Why have a charge port at all if it balances on detection of increas of voltage? Wouldn’t voltsag cause the bms to balance the cells during use?

APS who use best tech

Ehhh. Maybe its manufacture dependent. A lot of smart BMS has configurable settings for charge only balance, balance voltage trigger or all time balance. So it’s not set in stone how it works

As I understand it there is

This topics is about charging thro the load of a normal BMS due to the issue of 2 BMS been conected on bypass in parallel taking that in to consideration dose this still apply?

That balancing starts once a certain voltage is reached,

I guess one way to find out, test it. Take a pack sitting at 4.1 and charge 1 group to 4.2 manually and let it sit for a few hours and check again