My 2nd Build, almost but not quite right :-)

Decided to build a board for myself based upon what I learned from my build for my son. The 8mm axle I used on his board was bending under my 225 lb load. So I searched for local steel with a larger diameter - everything is imperial, that would telescope with a metric steel rod since most bearings are metric. But had to be larger than 8mm. Ended up with a 16 mm high strength steel shaft. I try to keep everything to McMaster since I’m using Fusion 360 and that greatly helps simplifying ordering and tracking parts. The steel is 3/4 " outer diameter which supports the bushings, then a larger dia steel to push the bushings together and tie into the octagonal couplings. The nuts outside of the motor plates put the pressure and squeeze everything together.

I originally had a stabilizing bar between the octagonal couplings but the larger 3/4" heim was almost resting on it and preventing any turning. But I have two aluminum bars between the motor plates anyway so that seems like plenty of stability. So now I just use the aluminum connecting the octagonal couplings for alignment and then remove it after everything is assembled.

Been test riding it for a couple of days. Two things aren’t working, the bushings and the wheels. The 95A durometer bushings are way to stiff. They are huge compared to normal esk8 bushings (3/4" inner dia and 1-3/4 in outer diameter) so I think I may need something as soft as 85A to effectively turn the board. I didn’t realize how large a difference 8mm to 16mm jump would be on everything. Just the nylon lock nuts alone are beasts to tighten. With that said, the thing reflects a tank more than a skateboard

The wheels are the bid culprit right now, just didn’t work out on my CNC. Flipping aluminum and getting it all to line up perfectly and balance without a lathe was too problematic. So I think I need to get a machine shop to make the wheels. The vibrations are too much and the ride isn’t stable above 20 mph. And I can’t turn, so that doesn’t help!

Went with the MakerX DV6 Pro and Hoyt St puck (used Flipsky on the first build). Much better, and upgraded my son’s board with the same VESC / remote and he’s much happier now too. His urethane 110mm wheels and board run really smoothly now and seem quite stable compared to signal drops and such with flipsky.

I tried 3D printing the enclosure and made it larger. I used 3mm bolts with hex nuts embedded into the walls to join the 3D printed parts together. Then used a soldering iron to melt the joints. It’s quite strong but the shape warped slightly and wasn’t perfect, but it works. I’ll probably cover it in carbon fiber at some point for esthetics.

Kept the deck and heim joint design the same as the first build except the main heim joints are much larger. Those EZ lock washers are crazy hard to undo, they really do dig into the aluminum which is great, but hard to take apart! But I don’t worry about them loosening during riding. The smaller heim joints for the 3 link get loctite which works well - they do vibrate loose without loctite.

Ended up using Kaly Phatty tires since the eXcel tires aren’t available. The 200mm Phatty’s are pretty huge, I think I’ll prefer the 165mm if they become available this century

The battery is similar to before based upon the @Winfly build. I used Molicel 21700 P42A this time and CNC’d the delrin holders which use flat set screws to put pressure on the braided wire above each terminal. I changed the shape of the delrin holders slightly to make space above and below them for the BMS wires and to stack the batteries with a slight offset to minimize thickness. Kept with the same BMS, LLT Smart BMS - thanks to @skyart for providing that.

Added the Maxkgo LED light strip battery system to the perimeter of the deck. They have added a sticky tape to their LED strips and it seems to be adhearing well to my HDPE outer deck for the moment. I’m a little dissapointed the braking function of their lights doesn’t initiate when I start braking, only when I’m almost completely stopped. That “delay” isn’t really ideal - I’d prefer everything to turn bright red when I start braking. But maybe there is a setting to change? Have reached out but haven’t heard back yet from @Maxkgoesk8. But having the LEDs on at night is nice - I want to be seen for safety purposes, my son thinks they look cool. Also kept the “Motorcycle Headlight Cree U7 LED Fog Lights Spotlight Daytime Running Lights with Blue Angel Eyes Halo Ring” on the front and back. I 3D printed a new holder for them as the thin aluminum they ship with ripped apart on my sons board several times. Just too thin to handle the esk8 vibrations. Wiring was a little challenging, but it always is the hardest part for me. I think you need to be an artist to have a tidy looking enclosure! I’ll never get there… but at least there is plenty of space this time!

I think I had to cut and extend just about every 22 AWG wire in this build. And the motor connectors didn’t fit the VESC and the Hoyt puck didn’t fit into the VESC. I will say, at first I was a bit nervous about cutting wires on my new “anything” - thinking perhaps I was missing something? Now I cut, solder and get on with life with no hesitation!

So aside from the ride being unstable and can’t turn, it’s great! But I think I will resolve that shortly and it is nice having pneumatics which can handle some pretty rough streets and such.

I can’t believe the McMaster order history I have through this… wow. Talk about a rabbit hole. But, it’s been a real joy to build when accounting for the temporary frustration and I am grateful to all of the wonderful and helpful information on this forum. No chance I could have accomplished any of this on my own. 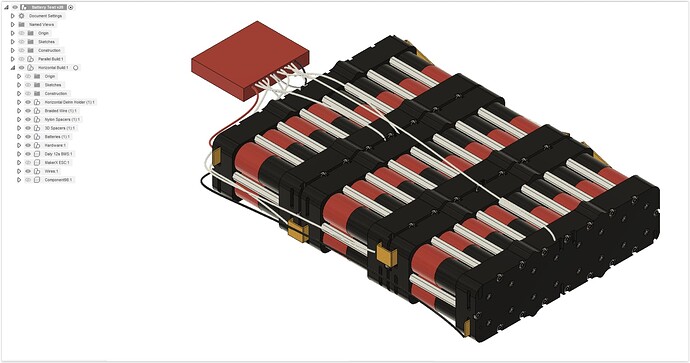 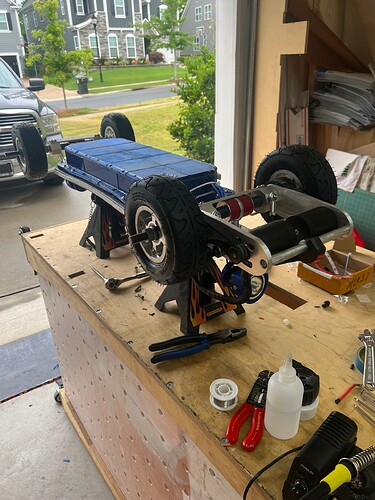 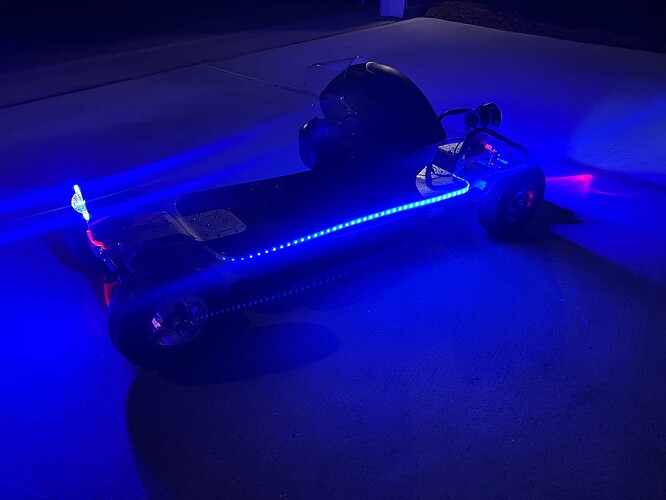 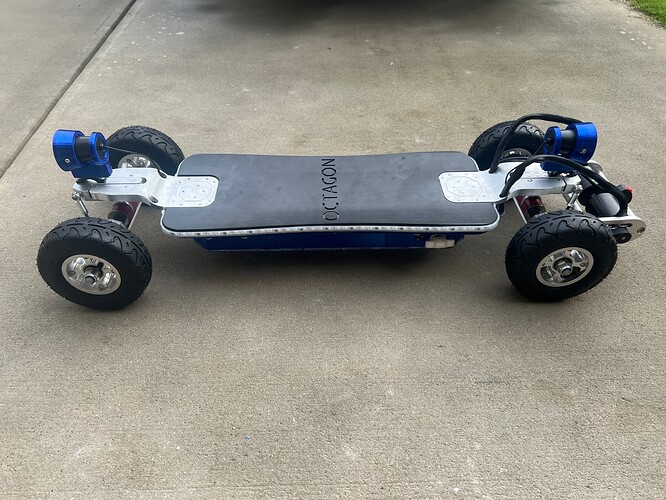 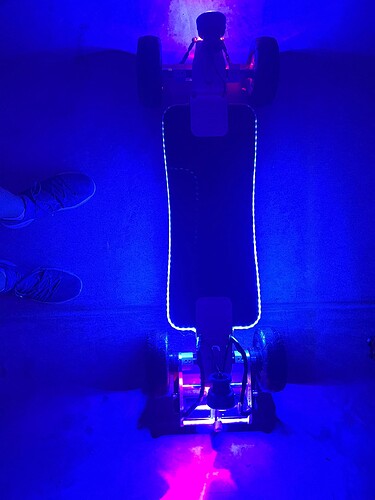 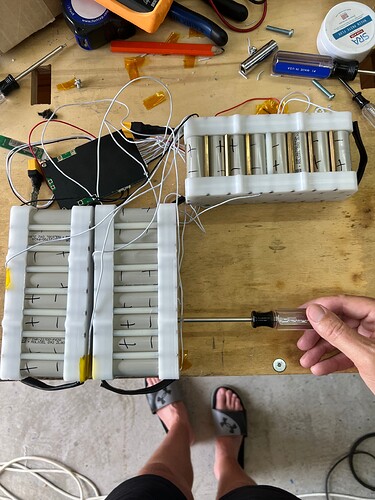 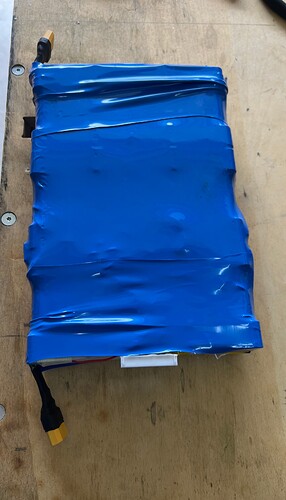 Really interesting build! Would love to see it in motion, I’m not fully understanding how it would turn. When you lean wouldnt the wheels just go slanted? I’m curious if that would offer a decent enough turn radius. Beautiful board man, looks like a beast!

I’m working on getting some softer bushings as it doesn’t turn much at the moment! 95A durometer is way too stiff. I’m ordering some 80A and hopefully mill some new bushings this week.

But, when you lean one way or the other the front and back wheels get closer on the low side and further on the high side which turns the board. Definitely don’t want any twisting of the main axle, thus the reason for the EZ Lock washer and nut on the main heim joint.

The 16mm axle definitely support my weight better so I’m pleased with how that turned out. The board is very heavy. I treat it like a bike and lock it to bike stands whenever I’m out and about. 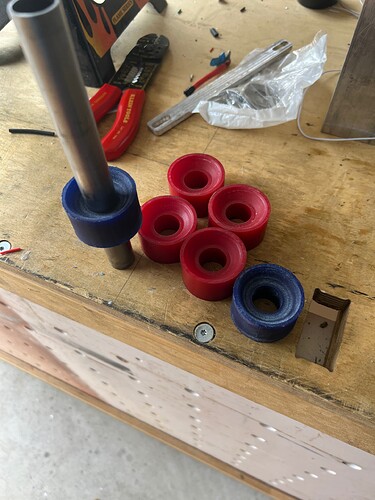 Changed the front bushings to 80A and back to 90A. Much better! Board turns pretty well now.