I’ve been riding a Slick Revolution Flex-E for a few years and finally building my own! One thing I’ve wanted is a kicktail, not for braking but to give me the option to turn in tighter spots, and when I was hunting around for a nice deck I found the Mindless Longboard Surfskate and just loved the idea of it!

I took delivery a few weeks back and put the magic front truck on my Flex-E to see how it rides and it is a lot of fun! 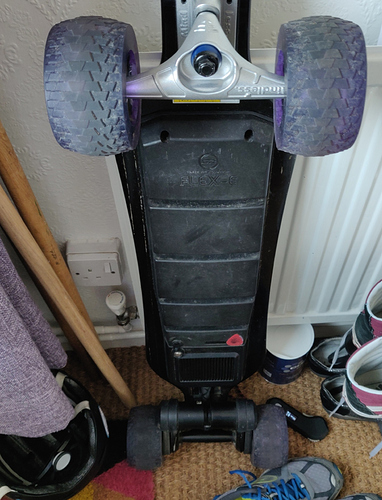 I’ve a pair of brushless motors from a previous build, they weren’t powerful enough for a skid steer ridable tank (long story…), but should have way more power than I’ll ever need on a board! Overkill, yes, but it’ll make getting my ass up hills much easier. I’ve only briefly had my Flex-E in max speed mode and got nowhere near the top speed on it so not fussed there.

These are the motors I’m using, annoyingly they’re too wide for side by side so I’m going for a dual diagonal setup. I’ve a pair of VESCs from the same project, they’ll be connected via CAN and I’ve a VESC Wand to control it. Batteries will be 12s4p, I’ve the cells already and I’m waiting on the BMS.

Another benefit of the kicktail is (I hope) the ability to lift the front end to get up on curbs, with the dual diagonal I’m hoping this will work a treat but we’ll have to see. Because I’ll be trying this I’ll mount the motors behind each axle, this means that if/when I mess up there isn’t the risk of me smashing my motor against the curb. The rear motor mount will be a lot beefier too, I’ll act as a kinda wheelie bar to stop me scraping against the motor if I step on the rear too hard.

I’ve Foamies on my Flex-E, I’ll try with those or go for the Cloudwheel 105s. Either way I’m expecting to carve out the deck a little to prevent scrubbing and maybe adding endstops to prevent the worst of it. I’ll have to see once it all comes together.

I’ll be designing and printing the battery and electronics enclosure, I’m planning on printing in transparent PETG in sections that overlap and will seal with RTV. It’ll not be optically transparent but enough that the lights from the VESC and other bits will show through, I’ll be mounting a pair of LED strips in there too for shits and giggles.

Between the VESC and the VESC Wand dongle I’ll have a Teensy too, it’ll control the lights and also allow me to add in a pressure sensor in the rear truck to act as a deadmans switch. One thing I want to try is having the lights pulse along the underside of the board depending on speed and a rear brake light too. I’m not sure how yet but I also want the two strips on the underside to light up while charging to show how full the battery is. I’ve used INA260 sensors on other projects so I may just throw one on the charge port, it’d be an easy win.

The enclosure will be split at the point between the two battery segments to allow for a bit more flex, I haven’t got that far in to the design yet.

I also love the almost tribal design on the underside, I’m going to design the enclosure to replicate that as much as possible.

Lots of work to do, I thought I’d run a build log on here as I’ve been lurking for a while and learning from the other builds.

[Reserved for future use]