I’ve finally got my first build to the point where I’m happy with it after (???) months/years…
So, I’m proud to present my abomination: Lilith. It may not be much, but it’s mine <3

Building this board was a blast, despite taking the majority of eternity to complete…
I originally started with my LiPos in parallel on 6s hobby ESCs, but switched to 12s and Unity after not too long. So far really impressed with the quality of the TB motors, lots of nice torque and they run nice n’ smooth.

The enclosure is mounted on screws right through the deck cause when I started out I didn’t know about inserts. The trucks have had the shit kicked out of them so the appearance is somewhat ah… rugged? But I think it adds some charm to the whole thing. The clone wheels actually ride crazy smooth despite being on the cheap side, which I’m really happy about. BTW, if anyone has stickers they want to send me, I’d be more than happy to add them to the enclosure stickerbomb

I’ve yet to add my taillight so I’ll update the thread when I figure that out (also yes, my headlight is a flashlight clamped to the deck, get over it

Here’s the pics… I’ll get some better ones when I take it out for the first real ride. 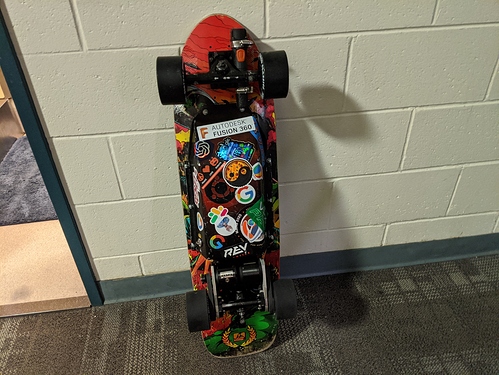 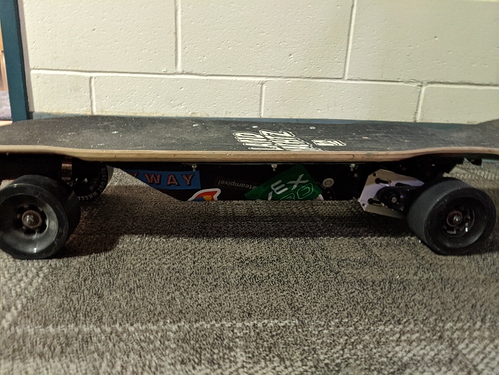 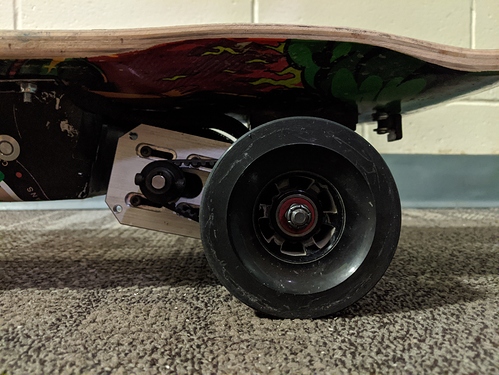 IMG_20200131_2026454032×3024 3.97 MB
Y’all have been a huge inspiration while slogging through a lot of setbacks building this thing, so I want to offer a heartfelt thank you to every one of you for being the amazing folks that you are. Cheers to you guys

How ya charging? Did you wire up a BMS?

Looks good dude. Let’s find you some better wheels tho. I might have some.

looks good and at 12s I bet it’s fast. What gear ratio?

Unfortunately, I don’t think these pulleys are ever coming out of the wheels… They are v stuck and I used adhesive to keep them that way

I was having trouble sleeping, so I decided I’d stop waiting for drier weather and take the board out for a little run. I have to say, after far too long tinkering trying to get this board to work, the wind on my face was so nice.
Did just shy of 2.5km (just a loop around campus) at pretty slow speeds (avg 10kph, don’t get mad at me, the roads were wet and I nearly skidded out twice).
So far I have to say I’m seriously impressed with the @torqueboards motors and @Boardnamics mounts on this thing. Motors run ice cold and make a real sexy hum, and the mounts held up really well so far. Excellent products from both vendors!

I don’t have metr so I’m just using geotracker on my phone which seems to work pretty well, except the elevation and slope data which appear to be borked.

Hell yeah man, welcome to the clurb. Love your choice on the deck BTW

Thanks dude! Glad to be a part of the community

Honestly love at first sight with this deck though… The concave is just right and the kicktail is amazing. Nice n’ wide too which I liek.

Update: been riding the board to and from class the past few days, including some somewhat inclement conditions. Everything is performing beautifully so far - took some getting used to with current control since I came from hobby ESCs, but the smoothness of FOC more than makes up for it.
Still thoroughly impressed with the torque of the TB motors, which is enough to buck me at full throttle from stopped.
I rode on some really smooth dusty concrete a while back and the brakes locked up and I fishtailed a bit which was interesting.
Looking forward to many more incredible rides on this build!

Further update - Since I have the board down for maintenance anyway, I’m working with a few friends to effect some overall quality upgrades.

I only have a week to complete as much of this as possible, so wish me luck! I’m super excited to see how this turns out!

First goal to be completed: batteries have been unfolded and repacked into the new form factor!
I’m going to start working on the deck today but I don’t expect to get much done. I have to wait until Tuesday to get my fiberglass so tomorrow will also be focused on deck work… 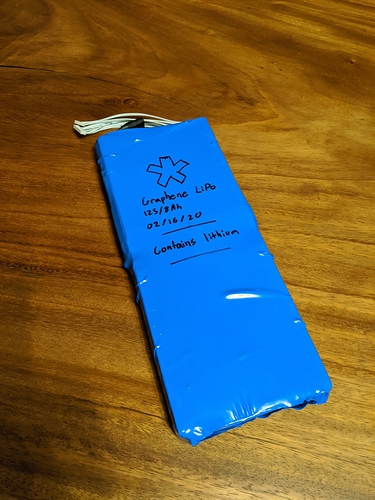 I got a smidge of work in on the deck today… Took it up to 400 grit with an orbital sander.
Currently contemplating how I want to arrange the enclosure, how I want to finish the deck, and how I want to route my cable slots.

I now have the assistance of a good friend of mine for the week so future development should come quicker. Night y’all!

Good work so far on overhauling a board. I’m going through a similar process rn since I’m converting my board from the raptor hubs to a belt drive, along with some other improvements.