I’d like to present my first build. I learn’t a lot, both from research and error, and overall I’m pretty pleased with the result.

After falling in love with the design of the Landyachtz Evo Falcon, I didn’t hesitate in deciding to base my build on it. The deck performs just as well as it looks providing stability at speed whilst still allowing for comfortable carving. Learning that @Eboosted made an amazing enclosure for it absolutly sealed the deal. The enclosure Alan made is truly a work of art, it fits the deck like a glove, has enough room for all the components and looks amazing all at the same time.

The battery I used is a 10S4P 36V 12000mAh made locally here in WA buy @Marsen Energy. The quality is top notch and construction fast with a three day turn around. Attached to it I have the Bestech BMS bypassed for discharge. 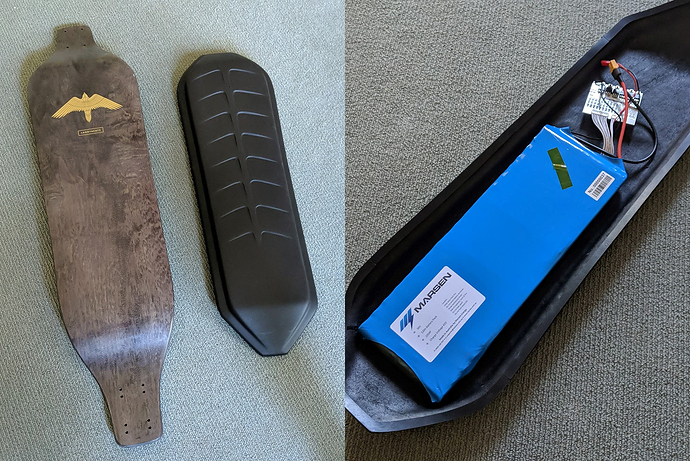 Considering this was my first build the electronics were quite intimidating at first, but after some decent research and planing I managed to get it all together. I ended up removing the connectors between the switch and VESC soldering the wires together to simplify the wiring, and secured all the parts using velcro strips. I ended up having to cut the end of the enclosure off as the motors had zero clearance. 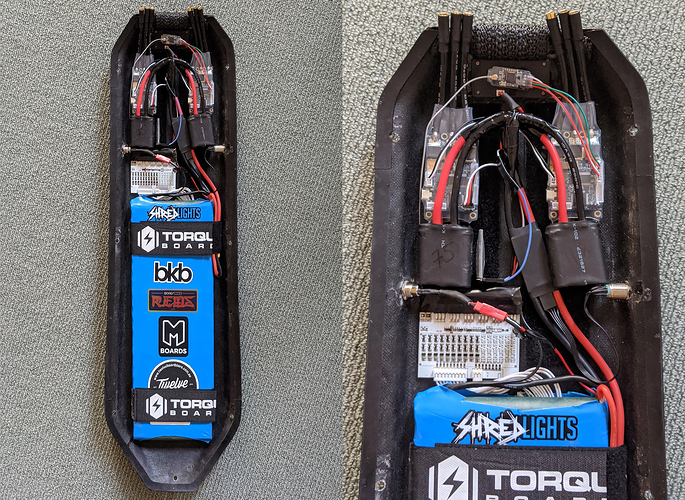 The motor set up was also quite a challange. The motor mounts from eskating eu are top notch and fit the caliber trucks perfectly, however they do position the motors quite low resulting in minimal clearance. The angled riser pads did help, but as mentioned before I did have to remove the end of the enclosure. Combined with the massive 97mm wheels from @torqueboards the buisness end of the board turned out nicely. The rest of the build was securing everything together and although mistakes were made along the way I’m happy with the over all product. 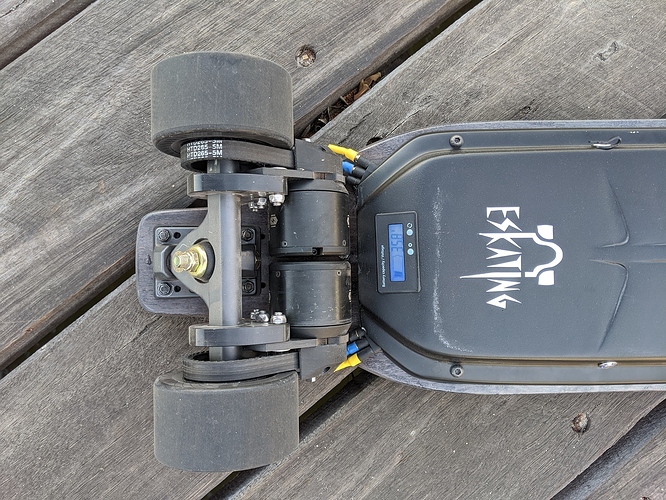 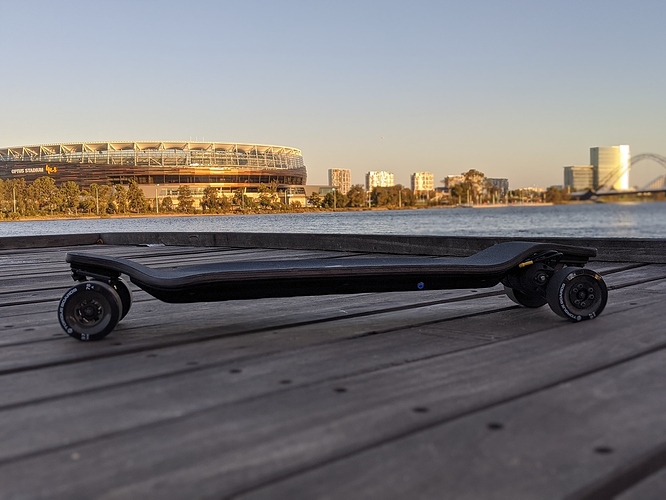 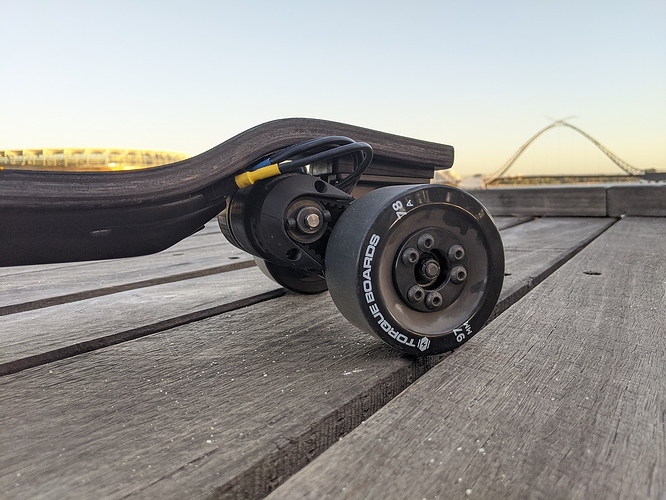 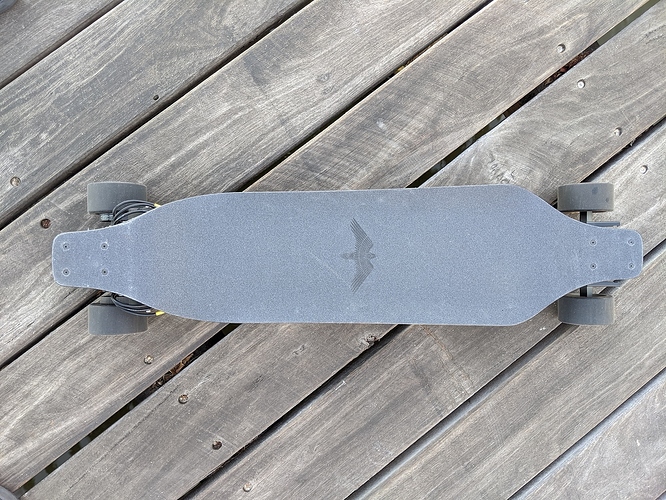 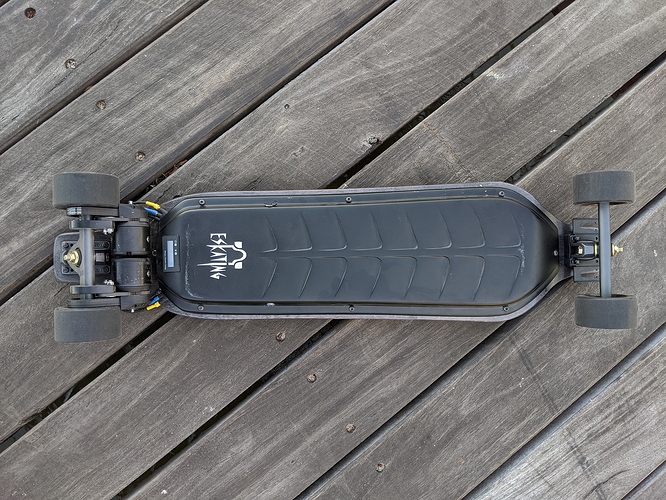 For the VESC programing I used the software by Ackmaniac. Here are some screenshots of my configuration. Any feedback would be appreciated as I’m still not 100% sure on the settings. One issue I’m having is that the battery percentage varies between the remote, battery indicator and app. 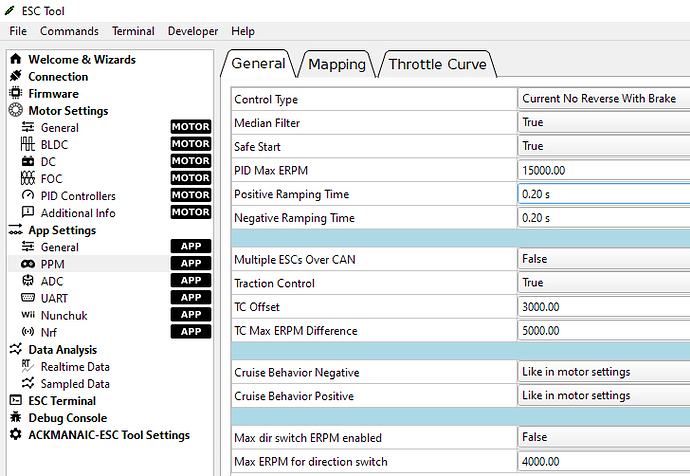 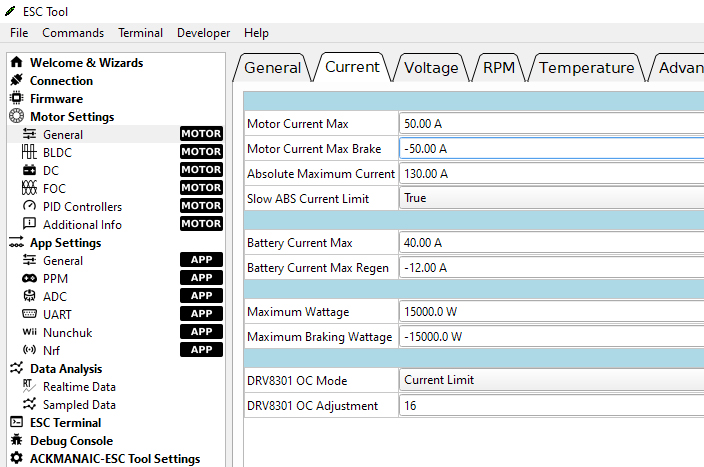 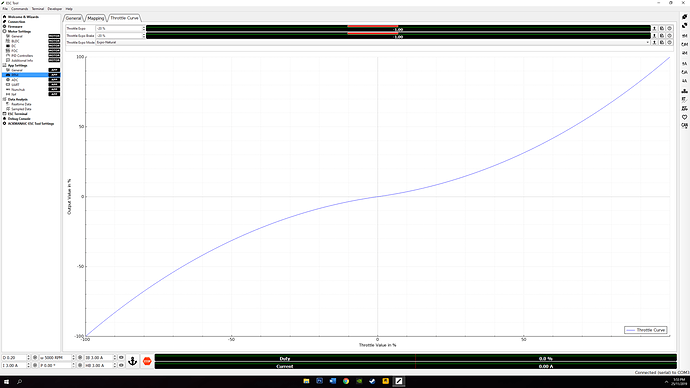 This is pretty close to my current build. I fucking love evo’s. What ever you do don’t un wedge the deck. The Evo’s +9 degrees wedge in the front and the -9 in the back is sweet on 50 degree baseplates.

Is it just me for whom the pictures aren’t loading? Perhaps it’s because you just joined the forum, @BillGordon should sort you out if that’s the case.

Saw the photos on the other forum – your vesc settings are good!

Solid build, only thing I would change to improve it is the wheels (they’re just cheap clones I think). Shame you had to cut the end of the enclosure, I wonder if that’s an oversight when designing it. I guess others just have more risers on their Evo builds?

Glad you made it over. I bumped you a level so you won’t be limited on posts and images.

Nah, I run mine out the back is all. I ran into this problem when I first wanted an Evo build. I had to dewedge mine and it kinda sucked. I switched to rear mounting mine with BNB 63mm idler mounts. The clearance is pretty good.

So I decided to do a range/speed test today and ended up getting just shy of 30km in distance and a top speed of 48km/h. So pretty stoked!

On a negative tho I did notice that something is going on with my motor. When you hold the motor in place and spin the wheel the motor shaft/motor pully rotate slightly. The other motor however is rock solid. Anyone come across this before?

Looks like the shaft is moving with the motor pulley while the can is stationary. So the only possible explanation is that the shaft is not secured properly to the motor can.
Check the set screws at the back.

I run my evo with no risers and 50 deg surfrodz rkp! I would never dewedge that thing.

I wasn’t keen on the risers, but without them the motors touch the deck.

Yea, a flat riser shouldn’t be too bad, just dont do an angled riser.

If you want to try angles, adjust 5 degrees at a time, nothing more than that. You can really tune the geometry of that deck and your handling with +5 -5 degrees. 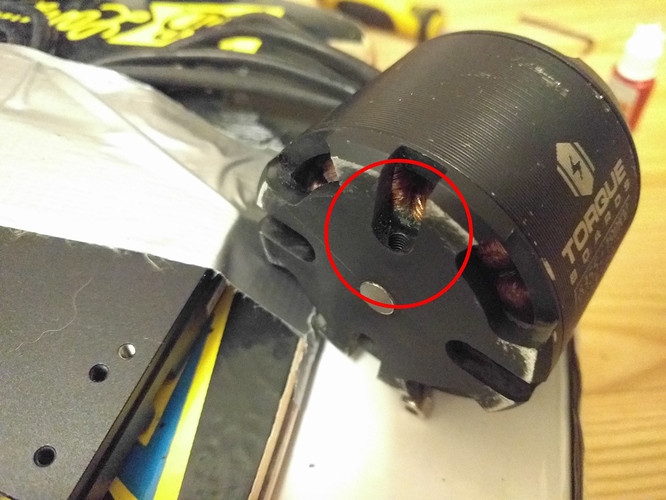 TB Motor can loose from shaft

https://www.youtube.com/watch?v=RU_QWrjOC7Y Video explains it best – the shaft has some wiggle room relative to the can of the motor. Didn’t notice this when I first got them (been riding for just 2 days). The noise also troubles me a bit, as the 2nd...

Moral of the story: Bought a new motor. Other old one has the same problem as yours now, but the can is still centered, so I’m going to use it until it breaks. New motor is still holding up strong, but I see that your motors are already the new kind, so I guess the problem persists between generations. My suggestion would be to get motors from a different brand, and longer truck to accommodate them.

Or do nothing and see how long you can live with it like this. Tighten the loose grub screws if you can, maybe add some more thread locker in there. It won’t break and toss you off your board in its current state; you’ll notice the can being off center once it starts making noises like mine did. Until that happens it’s safe to ride imo.