Anybody know how to fix these things? Or why they seem to work for a couple months and then stop working?

I’ve had an OG lone Star for a couple years and within the first month of having it both the headlights went out that was because the fuse blee on the sentinel board so that was wonderful having to take the enclosure off to replace the sentinel circuit board but once I did that neither of the headlights worked so they sent me replacement headlights which worked and after a couple months one of them stopped working got another replacement this time had to pay half price then the other stopped working had to pay full price for that one and now both of them are not working again.

I also just got a Kaly XLR and I’ve had that for about three and a half months and the left headlight on that went out couple weeks ago. Ernesto immediately sent me a replacement with all the fixings that I installed in works fine now… but every time these lights break on these boards I take them apart first to see if there’s any way to fix them and I can’t ever see any connections that have gone bad or any burned up parts of the circuit boards… I’ve never been able to fix one or diagnose the problem myself.

most times I noticed that the LED on the housing of the headlight, the green circle that lights up around the on off button will still be lit up but lit up at a much lower brightness than on the other headlight that may still be working properly so some Powers getting to it but the light doesn’t work actually on the kaly headlight that just failed a tiny bit of light comes out of the non-functioning headlight and still changes brightness but it’s so dim it’s probably throwing out a couple of lumens on the brightest setting… Anyone else experience this phenomenon… repeatedly?

this is in no way shape or form a complaint about LaCroix or Kaly… I could never express properly how unbelievably wonderful and responsive the folk at LaCroix and Ernesto have been anytime there’s any issue with their boards… even when I’m just reaching out to ask theoretical questions and try to gain knowledge from them I get phone calls and thoughtfully emails and eagerness to help they even suffer through my ridiculously long emails which if you’re reading this is saying something LOL.

I would love to be able to fix these and not have to bug them about it and go without lights from time to time and carry around Giant flashlights to keep me safe on my long middle of the night rides. I put 100 to 200 miles a week on these things so I certainly put them through their paces and it’s only and always the headlights that fail over and over and over and forgive me but no shred light or any other rechargeable mountable light that I’ve tried is anywhere near as good as the products that are used by lacroix and Kaly.

Too long didn’t read …sorry for my loquaciousness…but if anyone did make it this far and it has any advice I’d be very grateful for your knowledge and experience.

The HyBeams seem to break because of the cable failing so the supposed fix or workaround is to attach a blob of preferably black hot glue to the area where the cable is entering the back of the HyBeam case.
I had done so until the blobs came loose and now I just don’t care.
So far the lights keep working (knock on wood).

I’ve been told by a fellow Lacroix rider the cable is under some strain or somesuch and wires on the inside can break, that would explain a non-sorking light or even a dim power button.

I’ve wrapped that cable with epoxy when i first got them, was going to do the inside too but it came with lots of glue. 7+ months/4,000km and they still work

Yeah I did that with my second set and I felt like maybe I didn’t use strong enough hot glue or do it correctly but eventually the hot glue came loose and then I think that became part of the problem with a larger area to create a moment / torque on the connection and I don’t know maybe it kept it working longer than it would have but I’ve definitely have tried to reinforce that connection where it heads into the high beam case & still end up with failures.

I pulled all four of the lacroix versions apart
I can never see any connections that are loose or areas of the circuit board that seem burnt out or damaged or anything from my experience with the first set that went out because the sentinel circuit board fuse blue is that maybe they’re just getting overloaded somehow when my 240 lbs of human + the weight of the board is accelerating and topping out going up some 35° incline in San Francisco for a couple minutes straight or something I don’t know…shout out to the stormcore 60D… Thing consistently blows my mind… It’ll give out on me once in long whiles but it has yet to cut while im moving …waits until I stop and step off the board then it will shut down… So curious what an extra 25 volts would feel like on those supersports… Anyway thanks a ton for the reply… Safe riding! 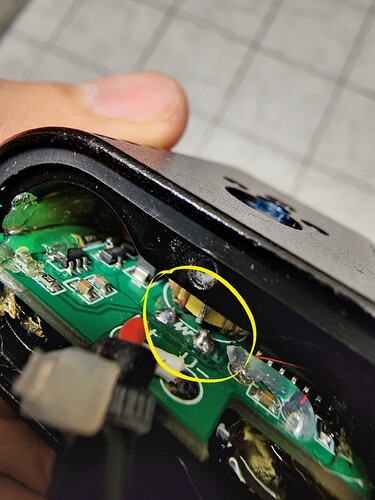 Possibly same issue with you?

Are there any lights in this form factor that are built by people that actually care? They all seem extremely fragile and poorly made.

They all seem extremely fragile and poorly made

Esk8 is an extremely harsh environment. But most lights would do better being potted to the brim if heat could still be dissipated.

Thinking about using hybeams to light my latest build. Does anybody have pictures of the cable reinforcement that I can use as an example?

Was going to do the same since i have the lights and connectors on hand but bailed on the idea. 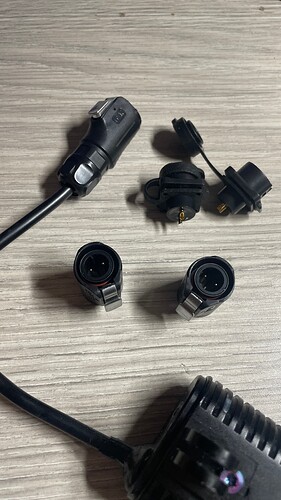 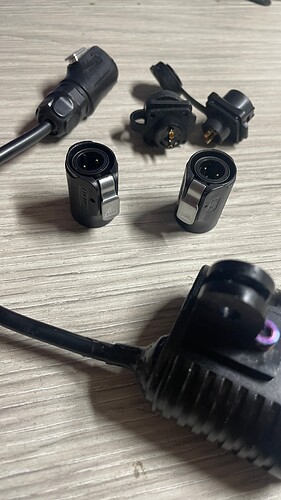 If you’re not planning on using the lights, would you be willing to sell?

Mine got done with the coil breaking itself from the contacts. Resolder and a bit of glue to make sure it no longer vibrates against the pcb did the trick.

man belated thx for the pic.

I actually just got two of the four lights that previously stopped working from my lone Star to work just now!

couldn’t find any bad solder joints but turns out just by lifting the coil a little bit to check the one that runs under the coil somehow the act of lifting it up allowed the light to work again.

Now that I’m putting it back in the housing I’m seeing that it’s possible for the coil to touch the enclosure copper to aluminum… which that can’t be good.

I’m wondering if I get this thing in a position where it’s working can you just hit the circuit board with some hot glue to keep everything in place or does that not mix well with circuit boards and potentially conformal coating?

maybe that’s why they’ve got the white glue on the top of the coil… to keep that copper from hitting the aluminum light casing perhaps?

It felt like a huge accomplishment to get one shining again… kept thinking how can this not be fixable?

Well prob in a bajillion different ways & I still don’t know the root cause but learned a little.

Anywho I’m going to keep tinkering I learn anything of note I’ll update .

And thank you again. wait did I say thank you…oh ya i did.

yeah I think cuz they’re attached to the trucks which are constantly moving back and forth maybe just the act of that cable changing position every time you tilt the board one way or another so basically constantly just the movement causes things to slowly weaken and fail.