How useful are impact pads?

The latest out of Germany suggests that, above cycling speeds (i.e. ~25 km/h or 15 mph), impact padding makes all but no difference to impact-related (as opposed to abrasion-related) injuries. The exception is helmets… thank God.

I’ve had one moderate spill at somewhere around 30 km/h wearing a Leatt 3df Body Protector under my hoodie and I was really glad for having it! I ruined a TSG Pass but I was otherwise completely fine… so it’s difficult to know what to think. Any other experiences to support or refute the report?

And you can’t ignore the abrasion related injuries, I would argue they are even worse than impact at these speeds than the impact, again, would rather have it than not.

Id have to agree. If you fall, hard enough no pads will ever stop your bones from breaking or gettin bruised.

Honestly though. That’s sensationalist journalism at its peak.

will not prevent fatal injury at speeds over just 25 km/h, or about 15 mph.

Of course it won’t, a little pad won’t stop a fatal injury, that’s why its fatal.

For the 98% of falls that don’t outright kill the rider they will prevent wounds that can become infected, take months to heal and further negate worse injuries that would have been fatal.

It’s like saying you shouldn’t put sunscreen on because it doesn’t completely stop skin damage from the sun. No it doesn’t, you stay in your mom’s basement if you don’t want to fall off your skateboard or get a tan

Obviously not us, we’re DWEEBS. All in a midlife crisis, we are. @Brenternet

they will prevent wounds that can become infected

That would be abrasion-related then presumably, not impact-related.

I think my interpretation of the practical value of this report is that if you’re hitting the deck at speeds exceeding 25 km/h, padding will be all well and good, but if you then proceed to hit a stationary object such as a lamppost or bollard, don’t expect the padding (‘little’ if you’re exaggerating for effect, or otherwise) to stop your spine from snapping or your neck from exploding.

But Brent is right.

Did you really think hitting a stationary object at 30mph would ever end well? Of course not. But if it is going to happen, my dinky little pads certainly won’t make the situation WORSE… but may help…

As someone who has fallen with and without pads, I will pick pads 100%. Sure they wont help if you smash into something going 30mph but pads do help with scrapes and secondary impacts

And here’s the clincher, if you were to end up in triage, every little injury (even abrasion) counts against your survival. Hence why motorcyclists still wear padding (we love our fleshy bits). 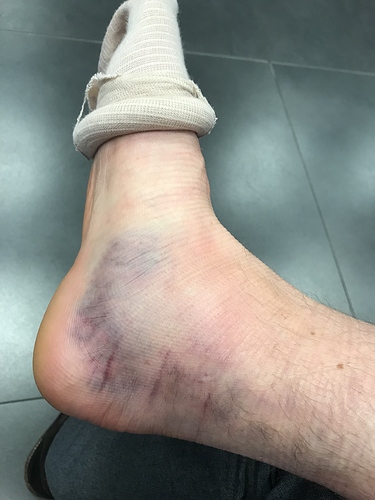 A good set of boots.

I don’t think a good set of boots would provide enough ankle support when trying to run at 40kph.
He is lucky he didn’t blow a knee.

Think it’s just ankle ligaments… Heel bone not broken which I am very happy about.

Did you get that checked out?? That looks nasty, take care of yourself plz and hope you heal up soon man

Cheers mate. Yup X-ray yesterday. Follow up later after swelling down. Only other mark on me was a small graze on my knee. Ninja roll worked well (ish). Lucky. Not going snowboarding this week I guess

. Gonna slow down a bit in future I reckon. Less speed, less impact. 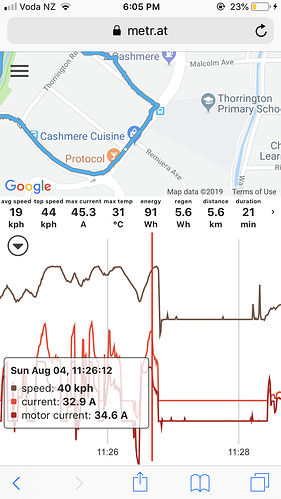 what’s the best way to bail once you get going that fast? slide on all fours? tuck and roll? Running it off clearly not an option

Need pads for sliding bro. Not just jeans, gloves and a lid.