How are my settings?

I am currently pulling my board out of the closet after winter and looking for some feedback on my Vesc settings. What do you guys think if ya care at all? (

I appreciate any feedback on what yall think about my settings…

I think I can go higher on my Motor/Battery settings (w/ the exception of the Battery regen) but I’m not sure what my limits are. What do you guys think?

U can regen way higher as it’s a short period of time. If it’s a decision between brakes that u want and ur battery’s max charge current go with good brakes

Current limits on motors aren’t a real thing either. They make stuff up and generally considered a continuous rating, but ridiculous as could be 2 hours or 2 days or 20 minutes. There’s no standard of assessment. Could be the equator or North Pole. At worst it will become more inefficient but it’s not a hard limit

They make stuff up and generally considered a continuous rating, but ridiculous as could be 2 hours or 2 days or 20 minutes.

Technically continuous rating means the maximum power the motor can dish out with a stable temperature. whether it is 2 minutes or 2 days, the continuous rating is the point where the core temp is near peak threshold but never crossing it, if it does lower until it does not.

That would depend on the outside temp. The wind.

Well that’s just going into semantics. Room temp (73F), no wind. Obviously if you run a motor in a cryogen tank it’s going to sink way more amps before it overheats. But general testing is always room temp with no forced cooling.

testing isnt done. Compare two motor spec sheets on hobbyking or any of the other stores or brands and u can see they make it up.

Well, just because the criteria is there doesn’t mean they do the testing. Some don’t even bother to do QC. But I would say for usage purpose and setting up ESC, max current should be equal to or slightly above stator saturation, since anything past that is just wasted heat.

max current should be equal to or slightly above stator saturation, since anything past that is just wasted heat.

You can go way into saturation and still be making increasing torque and it’s not as u say.

That’s why I was asking what current he was hitting. People will saturate their motor slightly or more without even knowing it. Vedder’s position control relies on no saturation though or it loses synch w controller

Once magnetic saturation is reached, flux flattens out dramatically. You’d be pumping excessive amps for a marginal gain on torque. It’s hardly worth it imo and as you say, desynch is very likely at a certain point, especially as heat increases.

This tells how with saturation it isn’t dramatic and shows the curve:
https://www.quora.com/What-is-the-effect-of-saturation-on-a-motor

Uh, doesn’t that graph show the opposite? At saturation it is literally almost flat-line. So no matter how much more power you pump in past that, you’re not getting any more flux density out of it…

Did u read the words? They explain the graph.

Okay? I read it. Are you trying to imply that I’m switching the point of maximum permeability for maximum saturation?

I’m talking about magnetic saturation in a motor and how it occurs.

You said when saturation is reached flux flattens out dramatically.

You said there’s no point in going above some max amp rating of a motor when the stator saturates as anything above is just wasted heat.

I’m saying and the link I posted explains saturation isn’t that drastic in the motor and u can keep pumping in amps and getting more torque just with less efficiency, less torque per amp. First the tooth tips saturate and so on.

Lemme point and quote:
“The motor torque vs current will follow a trend much like the BH curve, assuming enough current can be supplied without over heating the motor.” 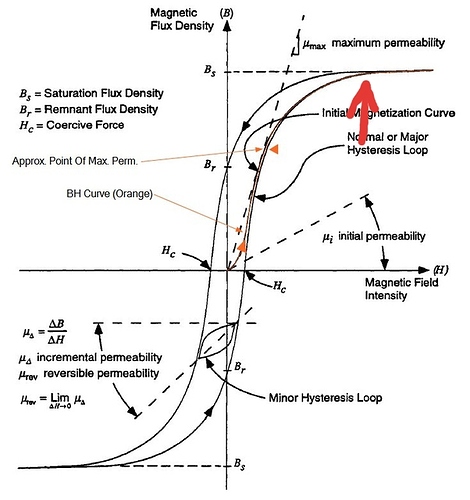 Follow the BH curve, the arrow is where you stop pumping more amps in because the saturation flat-lines past that point.

Yes. That’s way beyond where saturation begins in the motor. It gradually saturates the whole motor. U can add more amps and get more torque while saturated until that final point at which u will get no more possible torque, ur red arrow

But I’m done. Ur gunna argue I’m sure but I’ve seen it before from u as u go on and on. You told someone the max current u should set a motor to should be at saturation or just above as the rest is wasted heat. That’s not accurate and I brought this link showing that. Nothing more to say on it.
And you’d probably go on telling me cogging is due to eddies regardless of what I posted as well. Let’s agree to disagree if we must

Well I guess I meant saturation end, not begin. I found on 50xx, if you set amps to some high number, say 80, you will find that it feels like only half your throttle works. push full throttle to accelerate feels exactly the same as 50%. So I would go n say that some point in there, torque is peaked and all the rest is wasted heat.