So this is just another basic vesc 6, chain drive emtb. for those of you who have seen my thread on my MUD MONSTER know that it is riddled with design flaws and poor execution.
the thread- MUD MONSTER, Scrub mountain board | vesc 6 mkIII | 1:7.5 two stage chain drive
don’t get me wrong MUD MONSTER kicks some serious ass, but after upping the motor amps it really put the drive train to it’s limit. so from the ashes/ spare parts arose Harbinger a hopefully reliable mtb to bring good times and good vibes. anyway to the build

i had a spare trampa 16ply deck lying around and some over parts to build off. 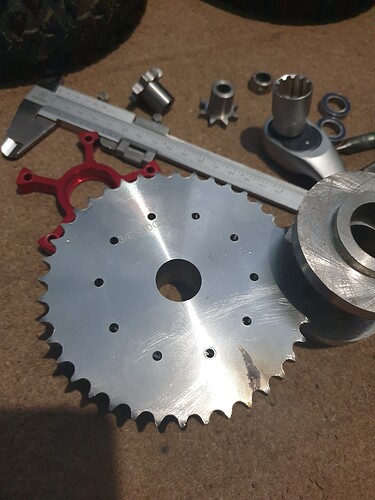 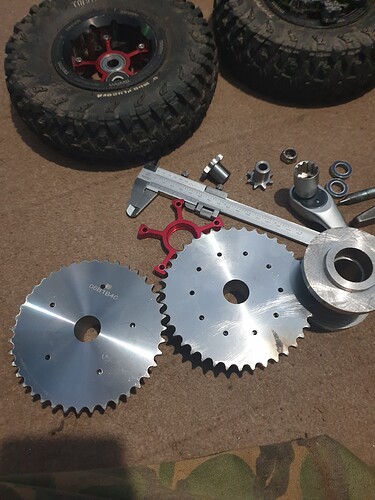 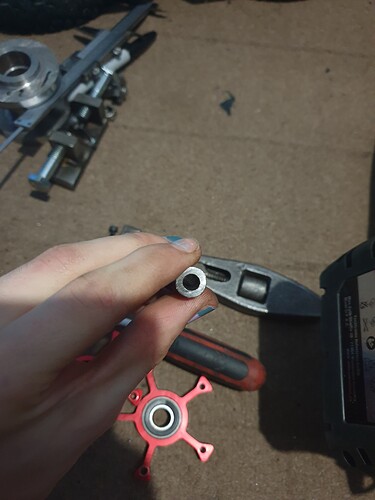 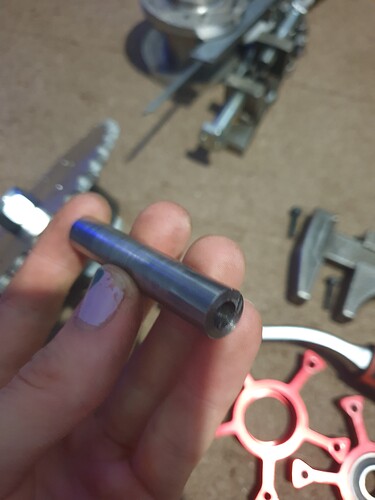 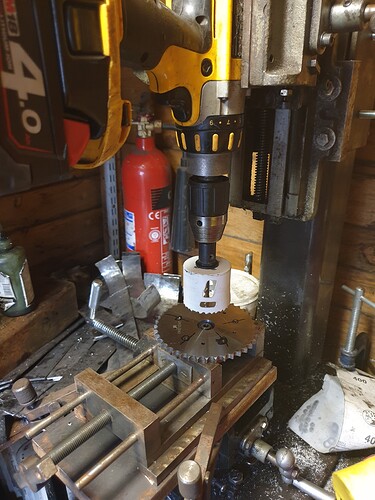 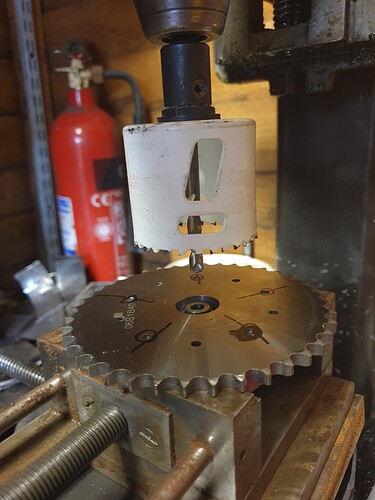 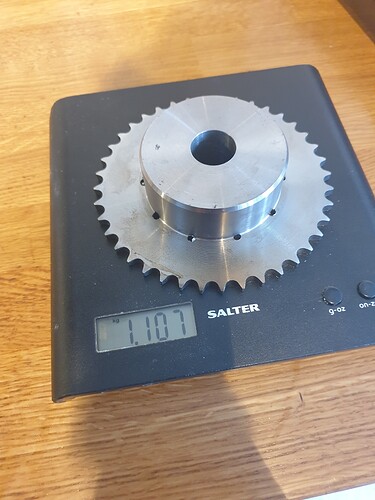 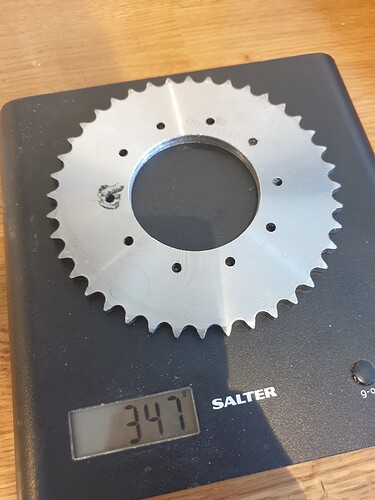 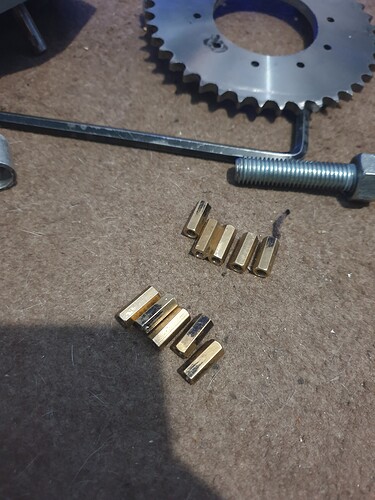 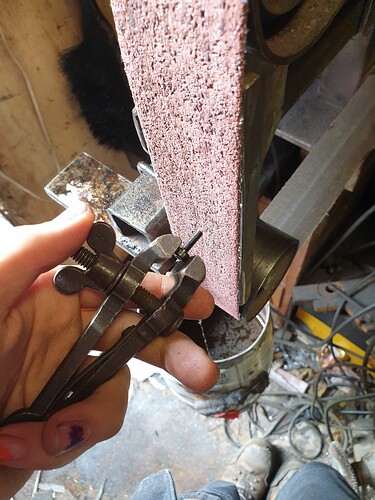 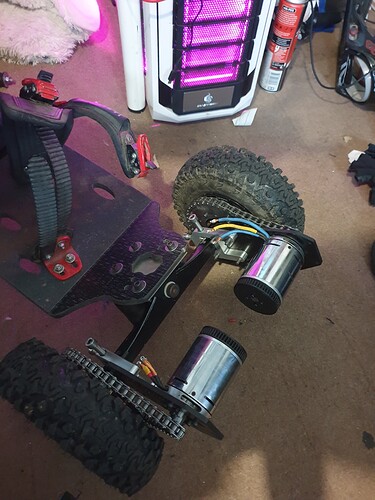 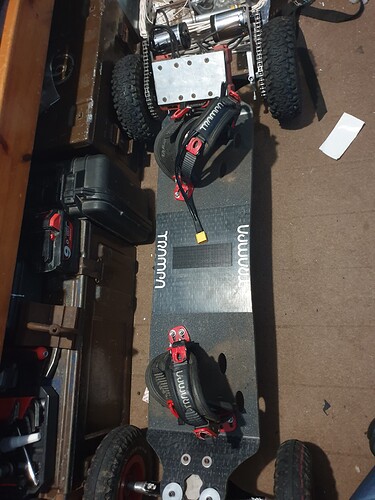 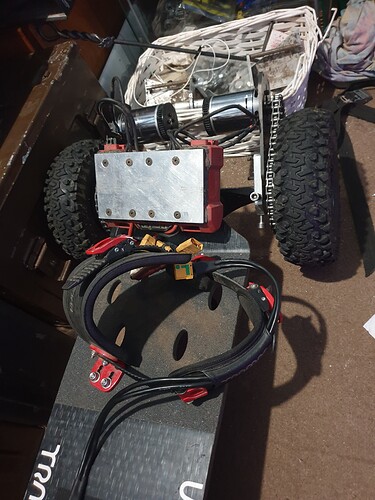 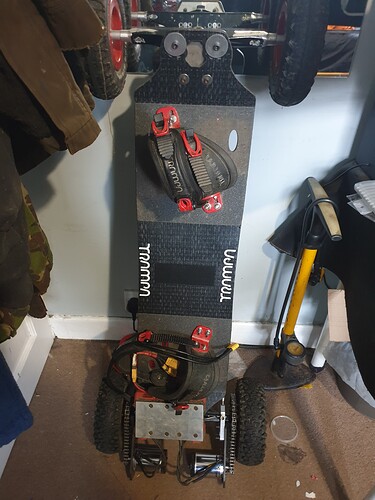 No mucking about! Nicely done.
If you could get some temp sensors you could always try ASS or without you could battle on with HFI mode?

Great work on the sprockets.

How’s the torque feel for you at that ratio/tire size and what motor amps are you running?

from testing in the hallway startup makes the motors ‘scream’ but when moving it seams to have plenty of torque, as for the amps each motor is set to 120a you may ask why, simple because why not

If you could get some temp sensors you could always try ASS or without you could battle on with HFI mode?

i have temp sensors and was thinking of trying ass, but can’t be arsed rn with installing the fw for it

Is there a specific reason why you didn’t used platewheel sprockets and just drilled them out?
I mean for the wheel sprockets.
They are usually cheaper than those you used and the middle part gets drilled out anyways.

mainly because i forgot plate sprockets existed, but the hub on the sprocket allowed me to clamp it in a vice while drilling it and the hub is made from a large hunk of decent steel which i most likely will reforge into tooling

took her for a spin today. i do miss the torque of MUD MONSTER but it is still quite good and for it’s purpose it is plenty. one big positive to bunny hopping a 33kg board is this one is nothing in comparison. and stability at high speed is crazy while i can still carve hard on it.

did some maintenance on the board after bout 60miles on it, first waxed the chain in motorcycle chain wax, this stuff works wonders on chains keeps the dirt out of the links and keeps them lubed, so no more ‘crispy’ chains.
adjusted the tension on the motors to account for chain stretch, re-added thread locker to some screws which needed it. had a bag made to put the batteries in with padding 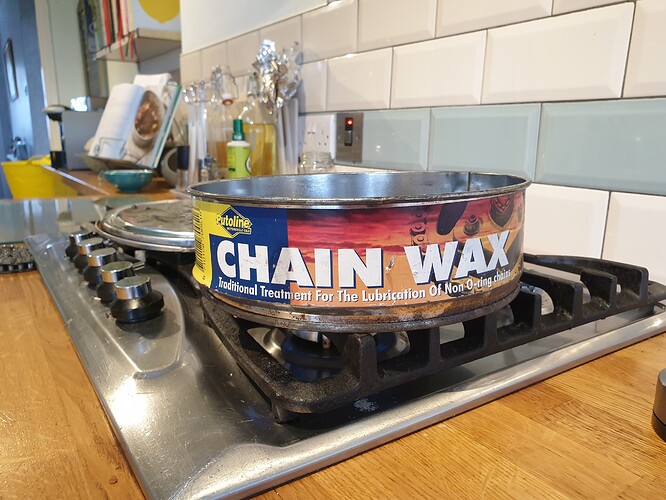 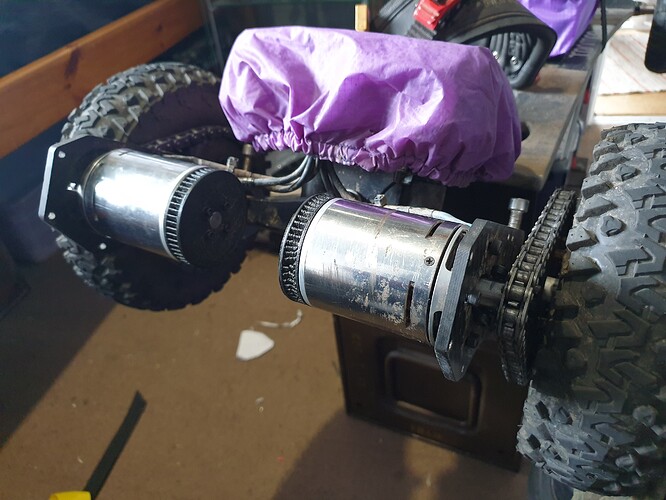 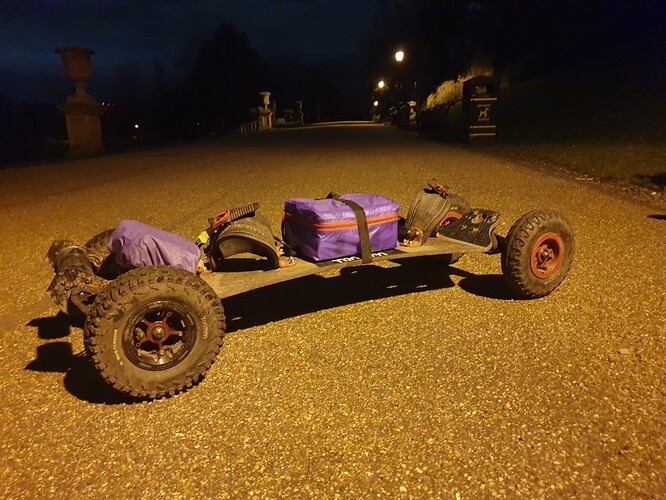 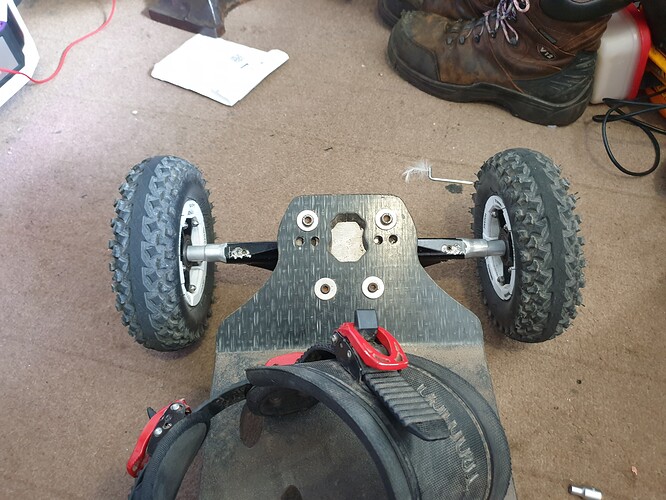 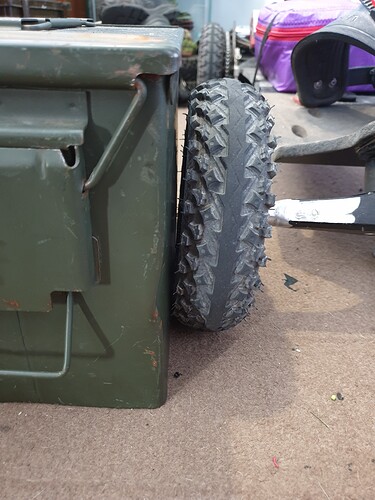 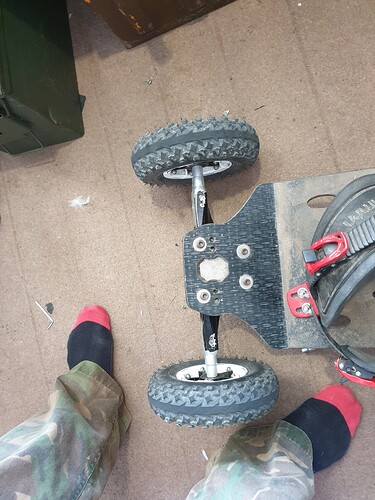 bent the front axle after i landed heavy after the the board ‘ran away’ from me- @Trampa you know whats going on?

also broke the clasp on my vesc box 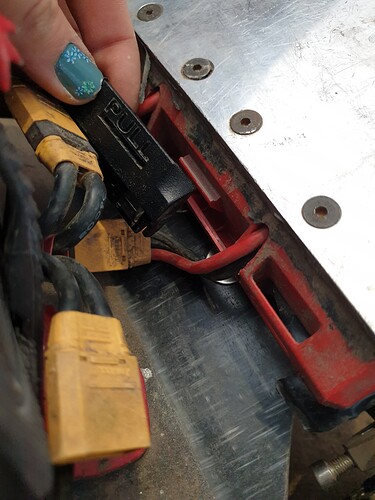 and crushed the carbon fiber mount 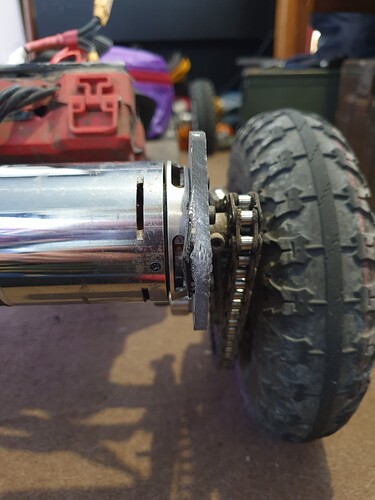 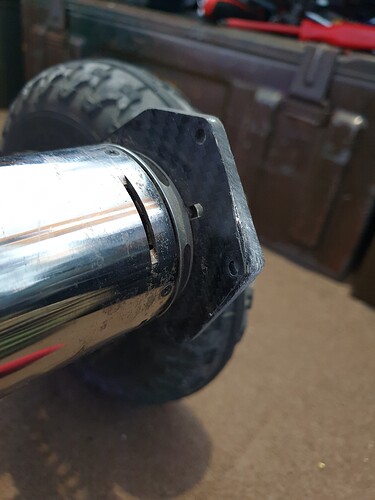 Are you good bro?

@rich do i get to join the club now

Don’t worry, now you are one of the leaders of the club

yeah i’m good, my pads worked a treat so only a scuffed finger. the board is a lil beaten up after it decided to do full throttle at the top of the ramp and the motor mount dug a 2 inch chunk from the bmx pump track 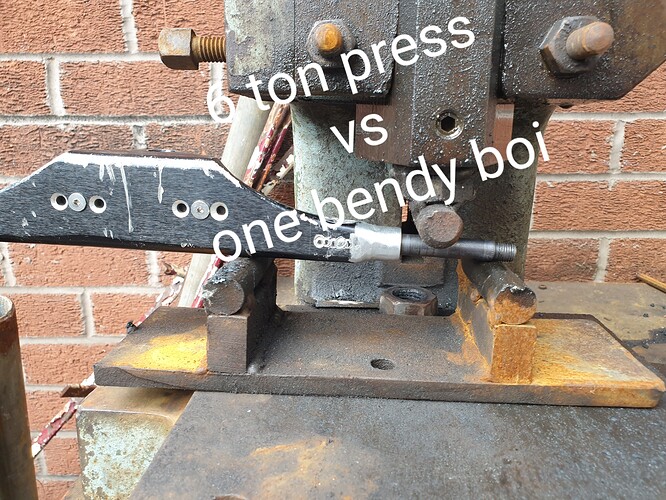 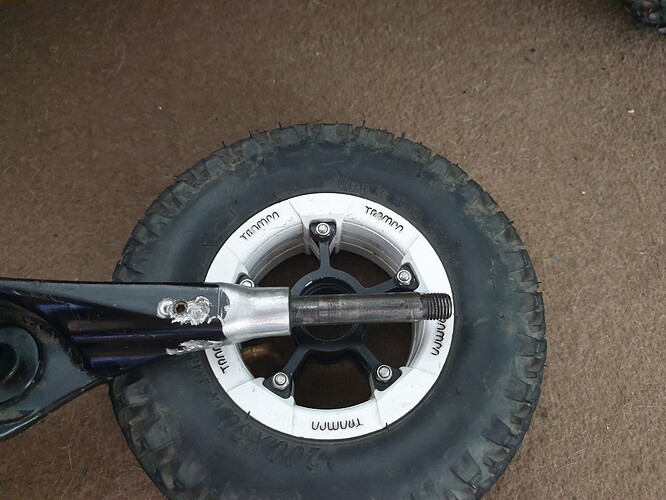 Just pre bend them in anticipation