I’m looking to be able to suddenly take my thumb off the throttle and not have the board rapidly decelerate. This can be done in software (there’s probably already a vesc setting?), but if your fine with lower torque it can also be done with low gear ratios.

What combinations of motor size, gear ratio, and wheel size have allowed you to be able to release the throttle and not get thrown forward?

If you go below 1:2 in gearing, you might as well go for hubs, cause it wont really do what it’s sposed to anymore. (which is increase torque and decrease overall current consumption)

Sounds more like you’re describing the mellow endless ride function, that does not exist in the VESC that I know of.

If you want legit freerolling I sudgest getting a hub build.

I don’t need endless ride, that would take pretty complex software. I just don’t want to be thrown if my esc craps out or if my remote disconnects.

The later can at least be solved with software.
Does kv affect freerolling resistance?

that would take pretty complex software

Not compared to anything else in the VESC

Nah not really.
Has more to do with airgap/cogging force in the motor.

There are motors that have very little coggin resistance, but you’re talking a different tier on cost vs. flipshit motors f.e.

Furthermore, the friction from the belts overpower any cogging you might feel. In terms of inertia atleast.

I advice you try hubs, really nothing like when it comes fo freerolling.

Direct drive or hubs, anything like above very high gearing is gonna be pointless for free rolling and cause very wierd issues, like high amp loads and extreme top speeds, i’d just reccomend sticking to direct drive or hubs as they freelance better.

I got 76mm urethane on also very loose belts with 15/32 and 6355s and the free roll is pretty awesome. The BN M1 urethane drives are also pretty great for free roll.

try adjusting the negative ramping down time. it basically controls how long it takes for the remote to send a signal to the motors to slow down. it can give the illusion of freeroll but you are still using power. I set mine to like 1s-2s so that it doesn’t jolt me when I release the throttle on the remote at high speed. 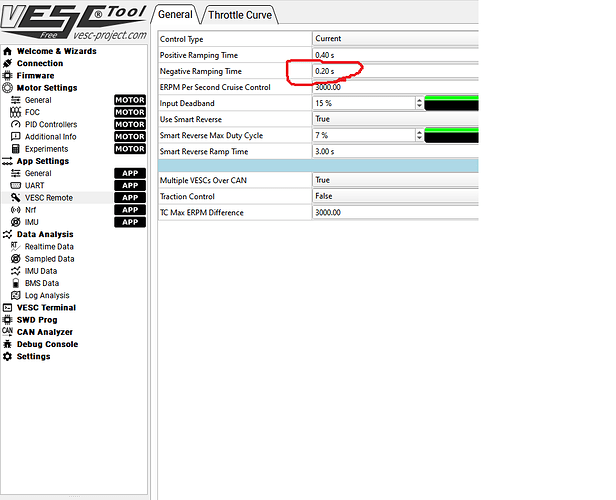 I would never do that, any time you need to brake quickly, your brake will take 2 seconds to fully engage and that is way too long

I don’t think that is the case. I believe braking output is a positive ramping time factor as well.

But that has always made me wonder if a higher negative ramping time would keep braking for a bit when you let off.

your brake will take 2 seconds to fully engage

no it doesn’t, ramp down time is only affecting how fast the motor slow down when there is no input from remote device

As you can imagine, the lower the gear ratio (wheel T / motor T), the easier it will be for your wheel turning (when free-rolling) to turn your motor. Motor KV doesn’t seem to affect free-roll, so you will probably want to decrease it to give your ESC an easier time driving the motor. Your motor’s max power rating will go down, so if that / overheating matters to you, you might want a larger motor as well to compensate.

Loose belts definitely give better free-roll than tight ones, and low gear ratios where the motor pulley has a lot of teeth allows you to run loose belts without worrying about teeth skipping. Gear drives might feel even better though, Idea has 1:2 gear drives for surf rodz TKP and evolve DKP trucks I believe. Or older moon drives with a lower teeth count wheel gear could also give you a low ratio. Although pneumatics don’t have great free-roll to begin with, unless you’re a masochist using Trampa gummies or something, lol

+1 for direct drive and hubs tho

That changed in recent FW? Because this isn’t how they worked in the past

For example, if you had two ramping set a two seconds for positive and negative and were at full throttle on the remote, it would take 2 seconds to ramp down to zero and then another 2 seconds until it ramped to full brake, don’t ask me how I know, wasn’t a fun experience

I wonder if that changed in FW as well. Because I could swear that when I once tested it the values seemed like they summed, but then some people here disproved that by setting 10 second negative ramping time, and they could brake just fine.

I can’t confirm as I always keep my values super low but I only noticed it earlier this spring.

Lets say you have your motors are set to 100 A, and cruising at full speed takes 10 A on the motors, for a 2 seconds ramp time, your board would only begin to slow down after 1.8 seconds since the set point for the currents will take that amount of time to reach the 10 A value and then ramp down to zero or brake from that

Inrunner + chains does freeroll for ages. Doesn’t matter which gearing.

the positive ramping time is what influences acceleration and braking. negative ramping only influences how long it takes for the motors to spin down on their own without any user input. I’ve been running positive 0.1s and negative 2s since 2020 and my breaking is completely very good.