I have some motors that are damaged in various ways and I am wondering what it would take to fix them.

First one is flipsky nonbattle hardened 6384 motor. all of the sensor wires broke so I started using HFI and that worked almost as well as sensored but then the motor started stuttering and I traced the issues to one of the phase wires being partially cut. 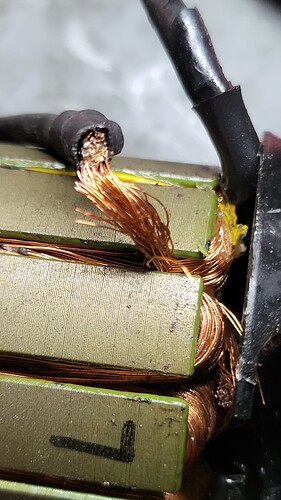 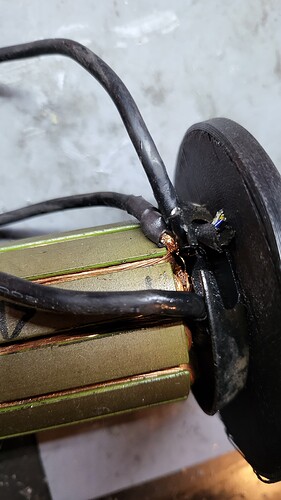 Second one is flipsky battlehardened 6384. Running motor under HFI it spins up fine but when it gets to higher RPMs the motor starts making scratching/grinding sounds. I believe the CAN is contacting the stator. This caused one of the magnets to get chipped. 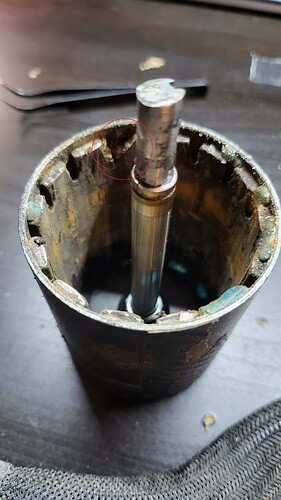 @hummieee used to offer motor re-winding, not sure if he still does that

i wont fix it but you could. it looks like you could get the wire all off and rewind or maybe just solder on a new lead. i imagine since its acting badly it would need to be rewound. an L/C meter for 15 bucks is a big help

I believe the CAN is contacting the stator. This caused one of the magnets to get chipped.

Before trying anything to fix that you should pour some vinegar into that rotor and let it sit out for a while and clean up any surface rust. The higher percentage stuff works best but do it outside because it smells.

Mine was a little bit of both as rust got under the magnets so I just went and carefully removed them all, kept them in their original alignment in some foam, and then carefully epoxied them back in place. Use a slow cure epoxy as it is a pain in the ass to align the magnets in pace. I used the high heat set from JB weld. That little chip of magnet that is missing won’t affect performance significantly.

With all the extra dirt and rust in it currently, I can’t tell if there are any spacers in it to help you align the magnets. Mine had a full coverage spacer and even with it it was a pain in the ass to get some of the magnets in place. Without any spacer it’ll be more difficult to line things up properly but not impossible.

Is there any source/guide you could recommend for rewinding?

I doubt its a sensor issue since I was running sensorless with HFI. I’ll double check for loose magnets. I can probably 3d print a bracket for realignment. I tried using WD40 and cleaning but didn’t help much. Ill see of vinegar helps.

With the vinegar it is best to just let it soak for several hours or for a day and then try scrubbing off what is left over. Since you have limited space in the rotor for scrubbing I’d personally let it fully soak in 30% vinegar for 24 hours. There are other chemicals you can buy for removing rust but I prefer vinegar since I know it shouldn’t react with anything other than the rust.

I just mentioned the sensors since that was part of what caused my issue and it sounded kind of similar to a magnet getting pulled out of place. Now I can tell the difference between the sounds though. Also cleaning it up and re-gluing the magnets may not 100% fix your issue but it will definitely help your overall performance a ton, and make it easier to identify the main issue.

“bavaria direct” search shows lots of winding diagrams. id do the LRK or the DLRK. LRK i think is known as dlrk on there but with some box checked. LRK is best for you i think because you can jam as much copper on first go and not figure what will fit. it has every other tooth wound so you dont have to take the things beside into account. and terminate wye is my favorite and has slight benefits. and make sure you glue it solid with high heat glue and secure the phase wires
ive been using vinegar for removing rust but it creates rust also. removing all the magnets and redoing sounds like a lot of work and need spacers. maybe nylon fishing line or nylon prints. If the magnets are that easy to remove sounds like they need better glue anyway, but ive left rotors sitting in tubs of acetone and didnt help breakdown the epoxy.

On my motor, all it took was a good tool to pry up the magnets because the glue had mostly failed already or in some spots the layer of magnet the glue was attached to came off. Mine had spacers which made life easier but also probably helped to keep most of the magnets in place after the glue failed.

Yes, it is a complete pain the ass to do but well worth it if it prolongs the working life of the motor. Although if someone didn’t have the time then it would be easier to buy new motors and give the one needing a repair to someone willing to do it for free. No need to toss something fixable out (just as a general rule)

ive removed magnets by setting the rotor on a gas burner. veryyy nasty smoke but then clean up the rotor and can start again. and depends on your rotor and maybe if a hybrid with steel ring pressed into aluminum it would end up ruining that press fitting and you’d have to glue that or maybe worse