Finding the deck you put so much time cracked is not the same as having the whole board burned down, but the feeling is bad, but this will be the rebirth of it, but going in the completely opposite way

One thing I’m really on the fence is the single drive, I will setup my board like that while the deck doesn’t crack completely and see how it handles, with the appropriate current limits and all

Any feedback is welcome, it’s been more than 2 years since I’ve ridden a single drive board

My main thinking with this board is that I will use a lot more since its less of a problem to bring everywhere, the 10S2P running at 40 A will give more power than any build I’ve done so far with hopefully 20 km of range

My main source of worry is breaking downhill with a single motor, lets see how the tests go

Initial design of the enclosure 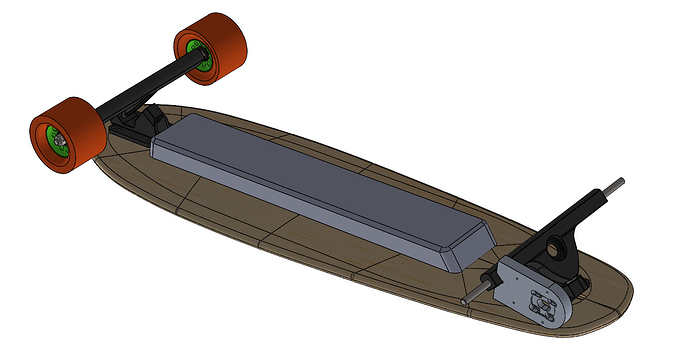 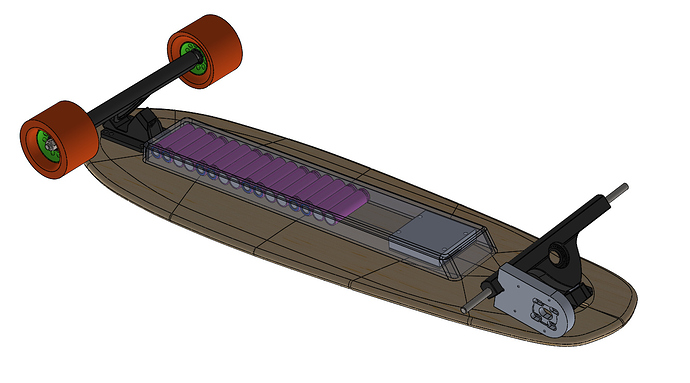 Run the numbers to get the weight of various possible setups

So considering I only have mounts for one motor using the Paris, the diference between single and dual is around 1300 g

If you wanted light, get hubs

I love my little single drive commuter. It’s all I have working atm. Can’t beat the weight loss. Just use 15mm belt and a bigger motor you should be fine. Never used 30q’s yet, but if you don’t have the battery built yet, would recommend something with a higher discharge like a lg hg6, will greatly reduce sag after the battery heads to its nominal value. Still you’ll love the small build. Nimble and versatile. Great to get around with.

Thanks for the tip, really makes me wanna make it as light as possible

Unfortunately my goal is don’t buy anything, only if it’s really necessary. The battery will be a part of my 10S5P, if I was going from scratch I would probably go with the Samsung 40T in a configuration that gives around 200 Wh

The motor is one thing that worries me bit, since it will be a 6355, it may overheat in a single drive, that is one of the things I want to test before building anything

Fair enough. I think it’ll be ok weight and terrain depending lol. You’ll love how light it is!!

Just get elofty from kenna or from crownwheel(cheaper, it seems), I have stopped using my gear drive because of how light my direct drive setup is. Also I have 10S5P of direct drive board instead of 10S4P on my gear drive. 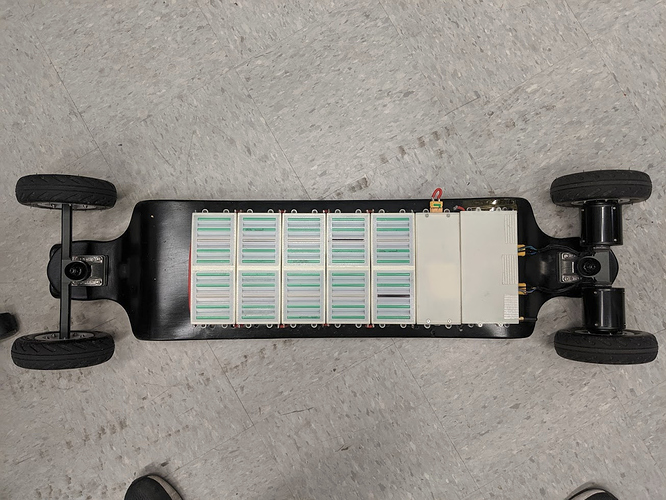 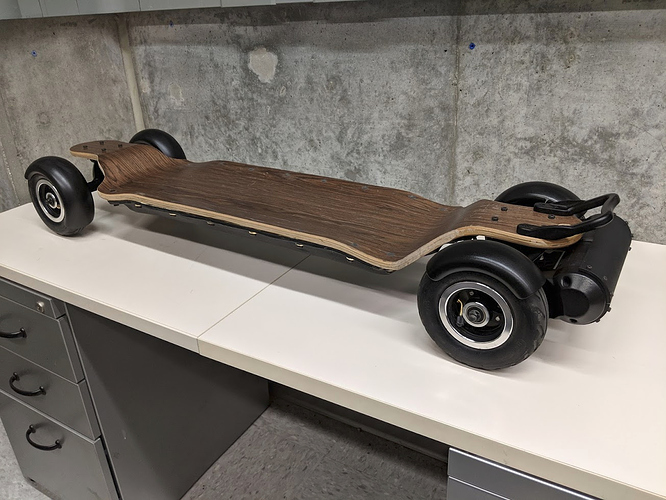 They are 63mm? I want to keep small wheels

They are precisely 67mm. So they reduce your ground clearance by 2mm(hopefully not a big deal), when compared to 63mm motors.

Nice, 9 mm is a bit too close for my taste, I ride a lot of rocky places, the motor will take a beating for sure with 85 mm wheels

What’s your weight dont mind me asking? I weigh 70kg and braking downhill on a single 6374 is pretty good. Perks of having a single drive is that you get a bit more range compared to a dual, which will be good for a commuter. Alternatively you can go for dual 5055 if you are worried about traction issues. 5055s will save a bit of weight as well

My previous build was dual 5055 and they were overheating like crazy, that’s my concern

Another funny thing is that going from 5055 to single 6355 then to dual 6355 my consumption stayed the same, all with the same current settings per motor

In terms of power, a single 6374 will give more. But traction wise, dual 5055s will be better. For example if you are braking downhill on damp roads, a single 6374 might slowly turn itself to the left or right from traction loss, which can be scary

@dani I’ve never run 6374, but in my dual 5055 with a low top speed compared to what most people run here I was still making them overheat in no time

Just as a comparison, my 5055’s 190Kv had 40 miliohms of resistance, and the new 6355’s have 16 miliohms, so running the same current at both, the 5055’s will have twice the copper loses, on a motor that have less thermal mass to absorb and dissipate it

By default I was running 40 A on each motor, but even going down to 20 A I was still making them overheat while having underwhelming torque

Today I went I did some tests with my board running it as single drive, at first I managed to overheat it in a few minutes of aggressive riding, but them remembered to input the correct beta value for the thermistor, maximum temp was 75°C but today was fairly cold and a cloudy day, I need to test when the road and air is fairly hot

Running 60/30 A the performance was impressive, and braking even more, but this is running Gummies that have really good grip, this week I will put kegels and do the same test

@Pedrodemio thank you for this input.
Currently I’m running single 6368 Keda motor, and I have no complaints about hills and torque.
I’m asking for future lightweight build, curious to see if I can save weight but maintain the performance.
Dani

The thing is, a single 6355 has plenty of torque, the problem is to see if your use case can keep it from overheating

Went back to Kegels and increased the wheel pulley to 36T, now I’m remembering the pain it is to avoid the belt skipping with smaller pulley, on the 53T I could run it really loose and it never jumped, now I’m really tight and it still jumps on hard braking, and this is running a bearing inside the pulley só it can’t flex the entire wheel